Chad And Jeremy - Before And After (1965 uk, orchestrated folk with wondrous harmonies, 2002 remaster) 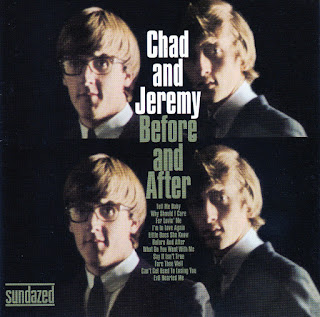 No one did lush, orchestral pop better than Chad Stuart and Jeremy Clyde. And very few traveled as far in their musical careers as did Chad & Jeremy. From their early hitmaking days as British Invasion moptop troubadours (and pinup dreamboats for teenage girls), to the complexity of their latter work, an eye-opening, deftly orchestrated, wonderful blend of psychedelia and dayglo pop, their work gained critical plaudits from all corners of the world.
Sundazed
The first Columbia sessions. We were still in the grip of the record making machine. We had no idea that the day would eventually come when you could record in your house if you felt like it. Back then it was the big Columbia studios, run by strict union rules and costing $285. an hour!  (deducted from your royalties of course - the old company store shell game.)
The flip-flopping between folk music, ballads and rock 'n roll is still apparent here. I remember feeling frustrated because I wanted to arrange everything. Our producer, Lor Crane ran a pretty tight ship and he wasn't about to let that happen. To be fair, our touring commitments made it difficult anyway, so we surrendered to the system and went along for the ride.
In retrospect, I like "Tell Me Baby". It pointed in a direction that perhaps we should have taken sooner. "Say It Isn't True" was written for Freddy and the Dreamers. Why we did it I'll never know!
Jeremy was only happy doing stuff like "Evil-Hearted Me". This would later prove to be our undoing when it came to "Teenage Failure", but more about that later!
by Chad Stuart 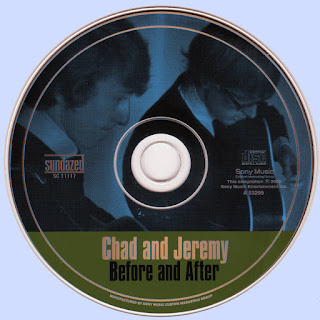