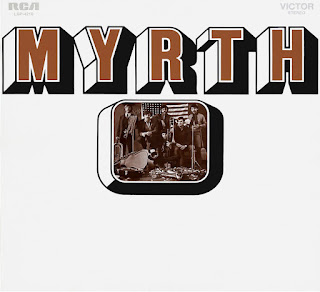 Myrth are all originally from Phoenix, Arizona. They started as a four-member band called The Counterpoints in West Phoenix High School.  After graduating high school, Johnny Guthie worked at RCA studios in California as a session musician. While there, he performed with Frank Sinatra, Miles Davis, and Sammy Davis, Jr. John Florez was the producer of the 1969 Myrth Album. He was also the producer of better-known hits such as "Grazing in the Grass" by "The Friends of Distinction" and "When Will I See You Again" by Johnny Mathis.
The lyrics of "Gotta Find a Way" were meaningful in the '60s. But carefully listen as it is still relevant today. The use of the horns for their musical track adds tremendous impact to the music. That is why they were known as a horn band, even if not well known. What you can't miss is the bird tweeting at the beginning and ending of this song. I felt that it got top billing. I noticed that it was in most of their soundtracks.
John Florez,  producer of Myrth's album in 1969 for RCA said that the bird singing in the background resided in a tree outside the band's living quarters in Hollywood. His licks were varied, lyrical and were always what the guys heard first every morning before arriving at the recording studio and upon returning home. In essence, he was the 6th member of the group.
Myrth had a way of making meaningful statements in their lyrics. My interpretation of the lyrics indicates that "He Don't Know" is all about how some men don't know how to make a woman feel. I always thought women were the ones with feelings, and men didn't focus on feelings as much. Myrth was probably trying to express something significant in these lyrics about social aspects of how men behave some men anyway.
"Get It Straight" is another one with lyrics that say something. Notice how easy it is to follow the lyrics. One thing I like about Myrth is that you can hear the lyrics clearly. You may even get some valuable meaning out of this one. I did. The answer lies within when you get it straight.
"Myrthiolate" is an instrumental musical jazz composition. It's something for a different mood—timeout for some relaxation. No lyrics. Just great jazz. "Fading Image" is about a lost road to happiness. While listening to the lyrics in this song, one can visualize the scenery. I don't know if any of the six of them wrote the lyrics. But if they did, they are creative not only with music but with words as well.
Myrth was known as a psychedelic rock group, although I never understood why psychedelic until I came across "Shed My Skin." Even the lyrics might be considered psychedelic. And that bird that resided in the tree outside Myrth's living quarters had a chance to include its own rendition of psychedelic tweets at the ending.
The meaning of this one was kind of obscure. "Don't Pity the Man" who has no compassion. I think that's what they are trying to say. They could have put more effort into this one. It seems like they just threw this on in the album to fill it up. Well, you can't get it all perfect! I don't pity them.
Grier Cook, who played guitar and sang the lead vocals, passed away on April 21st, 2014. "He was a tremendous talent and will be missed." Johnny William Guthrie, who played drums, passed away on December 31st, 2015. "He was a true friend and a gentleman and fantastic musician."
by Glenn Stok, Nov 17, 2021 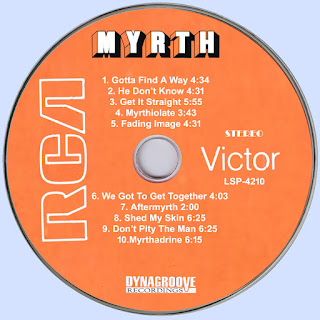