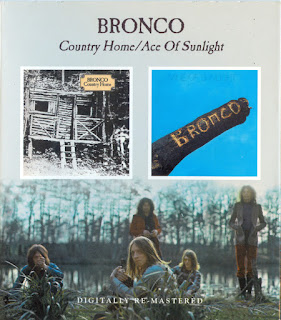 British country rock sounds about as likely and as authentic as British blues, but both were forces to be reckoned with in late sixties and early seventies rock respectively. Whilst the UK country rock vein certainly aped its US counterpart rather than actually kickstarting it as its blues predecessor had done, a number of artists from this side of the Pond found moderate success working in the form back across the water as well as at home. One of these was Bronco, whose early work compared favourably in its low-key ensemble construction with such luminaries as Neil Young’s Crazy Horse and The Band.

Vocalist Jess Roden had been featured frontman for the Alan Bown Set, one of London’s foremost live soul and R’n’B outfits during the late sixties. When the Bown train began to roll in a more psychedelic direction, Roden re-teamed up with guitarist Kevyn Gammond and bassist John Pasternak from his earlier blues combo Shakedown Sound. Gammond recommended second guitarist Robbie Blunt and drummer Pete Robinson from his own previous Band Of Joy – which had also featured a certain Robert Plant – and Bronco was ready to start buckin’.

Happy to change direction yet again and clearly inspired by the likes of The Band, Bronco became one of the first British groups to take a punt at the upcoming country rock form. Widely regarded even then as “Britain’s finest unknown singer”, Roden had no trouble bagging a recording contract at the mighty Island Records, and Country Home and a leadoff single “Lazy Now” (not on the album) appeared rapidly. Roden and Co. toured it extensively on both sides of the Atlantic – I recall seeing them supporting fellow Island labelmates Traffic at Bristol University Union during the autumn of 1970 – to favourable responses which unfortunately failed to translate to record sales.

Composed principally by Roden but with input from all band members plus close friend, future schlock-folk singer/songwriter Clifford T Ward, the album exudes rough charm with its low-key, live-sounding recording. The first five of its seven tracks ride mainly on acoustic rhythm guitars with clean countrified electric licks from Blunt and rather more pentatonic input from Gammond plus occasional restrained piano from guest Jeff Bannister, Roden’s former colleague in the Bown set, and bluesy harmonica from drummer Robinson. The harmonies are endearingly rough-edged throughout with a distinct Band vibe. My favourite tracks are “Civil Of You Stranger” with its rolling rhythm, E-string twang and funky modulation, the jugbandish “Misfit On Your Stair” recalling the Lovin’ Spoonful and “Home” with its simple two-chord motif decorated by distant wailing cross-harp and a soulful piano solo. The last two tracks see the band “man-up” with a saw-toothed twin-electric guitar attack that certainly recalls Young’s and Danny Whitten’s partnership or perhaps Free’s slower, funkier material.

Despite the failure of Country Home to sell in droves, a second album Ace Of Sunlight appeared the following year. This featured considerably more composer input from Ward and songwriter Suzy Worth plus a lot more instrumental arrangement and studio gloss, and consequently sounds much more urban mainstream soft-rock, lacking the rough rural edges that had made Country Home such a charmer. When this too failed to set the charts alight Roden saddled up for the States to team up briefly with ex-Doors Robby Krieger and John Densmore as the Butts Band. Blunt and Gammond would work extensively again with Robert Plant post-Zeppelin, whilst Roden finally embarked on an uneven solo career producing a body of work that confirmed him as “Britain’s finest unknown singer” until a total change of direction saw him become a graphic artist in the mid-eighties. Country Home and Ace Of Sunlight are available as a two-disc anthology of Roden’s solo work, reflecting the high regard in which a small but discerning cognoscenti still hold him.
by Len Liechti 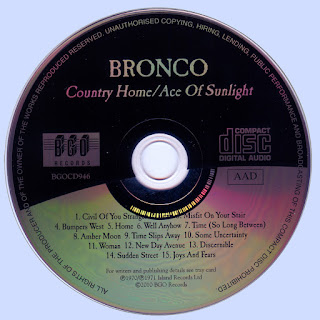 Free Text
Text Host
Posted by Marios at 8:39 AM 2 comments: