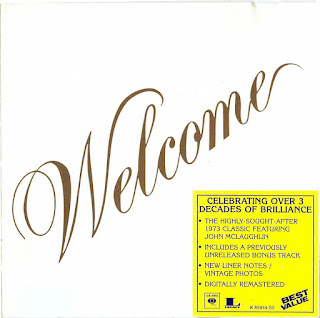 The choice of “Welcome,” a John Coltrane composition from Kulu Se Mama, as the title tune of the new Santana album is a natural follow-up to Carlos’ album with Mahavishnu John McLaughlin. Coltrane pioneered the direct rendering of spirituality through music in performances like “A Love Supreme” and “Welcome,” and the recent resurgence of interest in his work by spiritually inclined rock musicians is scarcely surprising.
But Welcome covers more territory than Love Devotion Surrender, which was simply a series of ecstatic jams on Coltrane and Coltrane-influenced material. Unlike the latter album, it refers explicitly to its various inspirations. Carlos has apparently been impressed by Airto’s Fingers, Chick Corea’s Light as a Feather and recent recordings by Leon Thomas, Alice Coltrane and Lonnie Liston Smith. In fact, Welcome begins with an Alice Coltrane arrangement, and both Leon Thomas and Airto’s vocalist, Flora Purim, make brief appearances. None of these is integral to the album, suggesting an intended tribute to sources of musical enlightenment rather than an all-star session or a round of hip name-dropping.
The two outstanding qualities which have separated Santana’s music from that of its competitors—Carlos’ expressive abilities as a guitarist and the talents of the band’s various percussionists—are much in evidence throughout Welcome. The qualities which characterize the “new” Santana are the keyboard work of Tom Coster and Richard Kermode and the broad range of the material. As examples of the latter, “Yours Is the Light” is similar in both design and execution to Airto’s current style of hot, neo-samba percussion with jazz keyboard solos, while “Mother Africa” departs considerably from Herbie Mann’s original with a kalimba introduction, thundering Afro-percussion, and a boiling, post-Trane soprano saxophone solo by Jules Broussard. “Going Home,” the Alice Coltrane arrangement, is a sea of organ sounds: “Samba De Sausalito” is a meeting of Brazilian and Puerto Rican rhythmic thrusts with an extended electric piano solo by Coster riding over the top, and “Love, Devotion and Surrender” sets words to the theme of the Santana/Mahavishnu album and builds to an impassioned, gospel-inflected chorus by Leon Thomas.
Carlos himself has never played better. On “Flame” and “Welcome,” he displays a resourceful guitar adaptation of the flutter-tonguing techniques introduced by Coltrane on the soprano sax; there is now more content and less effect in his solos, without the slightest diminution of the delicate touch and bell-like tone which make his work so unmistakable. The rhythm section is at its loosest and best; veteran Afro-Cuban powerhouse Armando Peraza and the much younger Jose Areas interact beautifully, and Michael Shrieve is developing a bag of his own out of directions laid down by Airto and Elvin Jones. There is more use of suspended time, different rhythmic structures and percussive colorations, making Welcome the most rhythmically satisfying rock recording since Professor Longhair’s.
Conceptually, the album sprawls somewhat, due to the occasionally divergent pulls of its various inspirations. But Carlos’ devotion to the musical substance of the Coltrane legacy is admirable, and he seems less inclined toward the superficial treatments which marred Love Devotion Surrender. There may not be another “Black Magic Woman” here, but there is enough of the old Latin fire to satisfy the fans, as well as a promising expansion of sources and resources.
by Bob Palmer, January 3, 1974 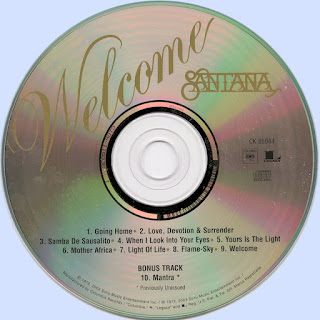