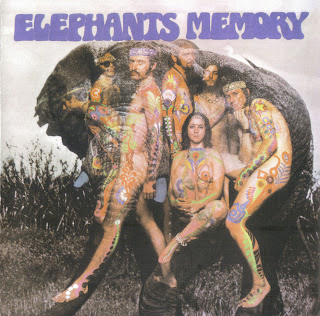 An elephant's memory is legendarily large, and so was the size and scope of the New York band that went by the same name. Unlike some other horn-rock ensembles of the late-'60s that took advantage of the freedom to expand rock's size and sound, however, Elephants Memory weren't merely a rock band with jazz overtones. There was plenty of pile-driving rock'n'roll, and a good deal of jazz of both the free and big band varieties.

But there was also soul, spaced-out psychedelia, and pop -- not just over the course of the entire album, but sometimes within the space of a single song -- and what can only be described as downright strange lyrics about hot dog men, yogurt, love as a jungle gym, and "Old Man Willow." Some of it was written by the guy who'd go on to produce David Bowie, some of it would end up on the soundtrack to the classic movie Midnight Cowboy, and the whole shebang was produced by the guy who'd go on to produce the Partridge Family. If Elephants Memory were a strange band, they were certainly no stranger than their surroundings, with second-degree-separations between the careers of not only Bowie, Midnight Cowboy star Dustin Hoffman, and the Partridge Family, but also the Beatles and Carly Simon.

The foundation of Elephants Memory in the late 1960s has been attributed to singer, saxophonist, flautist, and clarinetist Stan Bronstein and drummer Rick Frank; singer Michal Shapiro's understanding was that bassist/trombonist Myron Yules, who'd played in big bands with Bronstein, was also an original member.

Carly Simon briefly passed through the lineup on the way to her solo career. But by the time they recorded their first album for Buddah, she'd left and, as Shapiro recalls, "they had just blown out the pipes of a very good singer named Martha Velez." Shapiro took Simon's old spot as vocalist, and the septet -- now ranging in age from their early twenties to mid-thirties -- was filled out with keyboardist Richard Sussman and guitarists John Ward and Chester Ayres.

By 1969 large rock bands with horn sections were becoming far more commonplace with the emergence of Blood, Sweat & Tears, Chicago, Sly & the Family Stone, the Ides of March, and the Mothers of Invention. Elephants Memory would fall much closer to the avant-garde, at times absurdist, rock of the late-'60s Mothers than to the commercial likes of Blood, Sweat & Tears. Shapiro says, though, that it wasn't the conscious intention of the band to be different by virtue of bigger and more unusual arrangements -- "the band members just thought that there was an opportunity to use their talents in the rock sphere," and Bronstein and Yules would use electric soprano sax and electric trombone respectively in their transition to the rock world.

Even by the standards of the late 1960s, which saw some of the strangest and most genre-bending rock albums ever, Elephants Memory is a strange animal. The songs were as likely to mine a furious soul-rock groove as they were to explore ethereal psychedelic balladry with Doorsy organ. Even the relatively straightforward R&B-soaked tunes were apt to take weird left turns, like the guttural nonsense chanting and siren-like scatting that interrupt "Don't Put Me on Trial No More"; the "baby you're an animal, and I guess I'm just a cannibal" refrain of "Jungle Gym at the Zoo"; the low moans on "Takin' a Walk" that sounded like the mating of a vacuum cleaner with an actual elephant; and the hippie marching-band anthem ethos of "Band of Love." And there was "Hot Dog Man," where actual street conversations between the band and hot dog vendors were interlaced with hot funk licks and cheerleading-like chants from the band mimicking the hot dog men's sales pitch.

Bronstein rather than Shapiro tended to take a lot of the "R'n'B-ish" vocals, recalls Michal, as "I was never that much of a screamer. I inherited arrangements of songs that Carly Simon had worked up with the band. Eventually I developed my own repertoire, but that took a while, and is not reflected in that LP. The band had a very eclectic sensibility; sometimes it worked, sometimes it didn't. ['Hot Dog Man'] was much more cohesive when we performed it live; the version on the LP doesn't give the tune much room to grow. I had reservations towards all those lyrics about food [also heard in 'Yogurt Song'], but they were part of the repertoire I inherited."

The more soul-soaked cuts were actually outshone by some of the more melodic, psychedelic outings, particularly the seven-minute "Old Man Willow," the album's highlight. Starting with swirling ominous organ and decorated by guitar riffs that sounded as if they were being blown through a fishbowl, it was the best showcase for Shapiro's high and haunting upper vocal range, also embellished by wily horn lines and a waltz-time bridge. "That song really was the reason I wanted to join the band," says Michal, one of the tune's co-writers. "I thought the music was very beautiful, and an indicator of what I might be able to absorb as a musician in the company of those players." Briefer but similarly beguiling jazzy numbers that made good use of Shapiro's otherworldly scat vocals were "R.I.P." and "Brief Encounter," the latter of which had a Santana-like Latin-funk bed and snake-charming horn interjections.

While most of the band got in on the songwriting action in various combinations, a couple of non-members also pitched in material. The husband-wife team of Tony and Siegrid Visconti (who'd done a couple of obscure flop singles as a duo) penned "Hot Dog Man," and also contributed to "Band of Love." With Bronstein, Tony Visconti co-wrote the album's most unusual track, "Mr. Heep," which evolved from free jazz-ish instrumental clamor to a surrealistic verse (rather on the order of Neil Young/Buffalo Springfield's "Mr. Soul"), a jibing, Zappa-esque chorus, and a bad-trip bridge with circus-of-the-damned organ, throwing in a bit of Soft Machine-like keyboard frenzy and what could have passed for an actual circus fanfare near the end.

The Brooklyn-born Visconti was by the late '60s already in the process of establishing himself as a top producer in Britain, becoming famed for his work with David Bowie and T. Rex in particular. "When he was in New York he would make a point of visiting with the band," remembers Shapiro. "He was talking about David Bowie quite a bit then, and played us some tapes he had produced. I particularly remember a very interesting song with a nice cello arrangement that he played for us, with the line 'wear the dress your mother wore.'" That was "Let Me Sleep Beside You," a track Visconti had produced for Bowie in September 1967; as it wasn't released until 1970, Elephants Memory were likely among the first people to hear it.

The LP boasted a for-the-time controversial sleeve in which the band posed in front of an elephant nude, albeit obscured to some degree in body paint. That, combined with a stage show that in early 1969 incorporated inflatable stage sets (including a large inflatable plastic jungle), gave Elephants Memory's image a visual flamboyance, though Shapiro points out, "We were NEVER a theatrical band. We were a hard rocking New York band that was very good live, just playing our music. Wes decided that wasn't enough and hired someone to give us all these props, which we tried to use for a few performances, but it worked out like Spinal Tap's Stonehenge...even more surreal, actually.

While we were in L.A. we  did a film of all of us and Ultra Violet [the Andy Warhol-affiliated actress and artist who had a bit part in Midnight Cowboy] sending the damned plastic creatures out to sea."

Any controversy the cover might have attracted didn't help the album become a commercial hit, as it topped out at a heartbreaking #200 on Billboard's Top 200 albums chart. It did find greater chart success by proxy, however, when two of its songs ("Jungle Gym Zoo" and "Old Man Willow") were used in the soundtrack to Midnight Cowboy, which made #19 in late 1969.
by Richie Unterberger 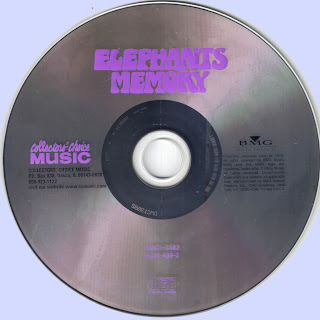 Free Text
Just Paste
Posted by Marios at 10:33 AM 8 comments: