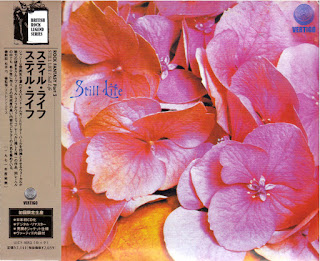 Bassist Graham Amos, vocalist Martin Cure began their musical adventure in 1963 in the Coventry band called The Sabres. They later formed The Peeps  in 1965. The other two members of the band were Roy Albrighton (guitar)  and  Paul Wilkinson (drums). The Peeps  recorded five SPs for Philips (1966-68). In 1968, they recruited Terry Howells on organ (ex-Ray King Soul Band). The drummer Paul Wilkinson left  the band in 1968. He  joined  a  band  called  Flying  Machine. With new drums player, Gordon  Reed (ex-Vampires), group's name was changed to  Rainbows. They  recorded two singles for CBS.  The Rainbows  had some gigs in  Hamburg, Germany and when they were finished the guitarist,  Roy Albrighton decided to stay in Germany. Later, he formed a band called Nektar.

When Rainbows came back to England, the drummer G.Reed left the band. So then there were three musicans: Amos, Cure, Howells. They changed a band name to Still Life and wrote the songs which turned into the album. But the band had not a drummer. Alan Savage was contacted to do the session and he had about a week to learn the material prior to recording. Album was recorded at Sound Recording Studios, near Marble Arch, London Savage was involved with the recording on the following dates: 1st October 1970, 2nd October 1970, 5th October 1970, 6th October 1970, 13th October 1970. The Album was mixed Monday 26th October 1970. Obviously, the other members were doing overdubs, vocal etc.on the dates in between. S.Shane did produce the LP. The Band had a contract to make a six LPs. But unfortunately the band drifted apart.
Pearls 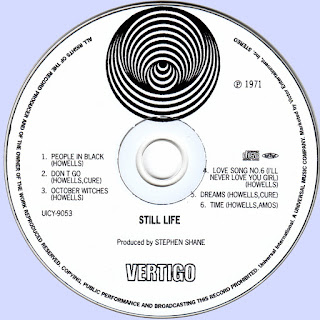 Free Text
the Free Text
Posted by Marios at 6:38 AM 1 comment: