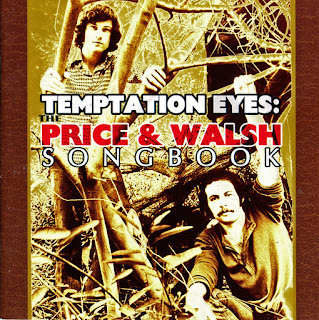 The title of RevOla's 2006 disc Temptation Eyes: Price & Walsh Songbook implies that this collection rounds up the original hit versions of songs they wrote but that were recorded by other artists, such as Bobby "Blue" Bland, Lulu, Bo Donaldson & the Heywoods, Cher and the Grass Roots, whose hit version of "Temptation Eyes" brought Michael Price (aka Harvey Price, as he was initially credited) and Dan Walsh into the consciousness of the music mainstream after years of toiling away behind the scenes. That's not the case. Temptation Eyes offers a chronicle of those days behind the scenes via a selection of 25 songs, almost all previously unreleased, recorded between 1966 and 1969.

The story begins here with a handful of demos Price and Walsh recorded after the disbandment of their first group the Motleys, music co-written with their collaborator Mitchell Bottler, that finds them firmly within the breezy, precious California sunshine pop sound, yet it was accomplished enough to earn the interest of record producer Gary Zekley, who had the trio pen a tune for the Visions ("Small Town Commotion," included here) before Price and Walsh embarked on a Sgt. Pepper-inspired album in 1967. This record was teased with a single -- "Love Is the Order of the Day" backed by "The House of Ilene Castle" -- but was never finished due to a falling-out between Zekley and the duo, with the surviving tracks finally seeing the light of day here. They are thoroughly ambitious, melodic psychedelic pop, clearly and proudly wearing the inspiration of McCartney's work for Sgt. Pepper, but presented through an L.A. filter so it has a studio polish and a commercial sensibility -- both evident beneath the somewhat shaky audio of the surviving recordings -- that made it akin to the sunny pop released on White Whale.

Following that aborted project, Price and Walsh parted ways with both Zekley and Bottler (the latter pair would later become a songwriting team) and after a year of work they wound up at Dunhill/ABC publishing, largely on the strength of their demo "The Publisher and the Poet," also heard here. While at Dunhill, they wrote for many artists on the label's roster, including Cass Elliot and eventually the Grass Roots, and the great majority of the rest of Temptation Eyes consists of their original, fully produced demos from this time. The Dunhill era begins with "Billy," a single released by Cotton Candy, and immediately it's clear that Price and Walsh had made a leap forward from their sunshine/pych pop. The precious layers have fallen away and their melodies, which have always been strong, are placed at the forefront, as they are for all their work on Dunhill. They still delved into this territory during the late '60s, but their work became more versatile and soulful, with even bubblegum-styled pop songs benefiting from propulsive rhythms and urgent melodies: the kind of music that became the backbone of AM pop as the '60s turned into the '70s, thanks to the likes of the Grass Roots and Three Dog Night.

This is undoubtedly commercial mainstream music -- it was designed as such, after all -- but Price and Walsh were experts at this music, which is why it retains its appeal years after it was recorded. The very fact that there is only one big tune here -- the title track, of course -- but that the entire second half of the album still feels as effervescent and energetic as the late-'60s and early-'70s standards speaks volumes to their strengths as writers: even when they didn't make the charts, they were writing with the charts in mind, and at their best they came up with music that felt like hits even if they never were. Nowhere is that talent better heard than on this pretty irresistible (and long overdue) collection of the duo's formative years.
by Stephen Thomas Erlewine 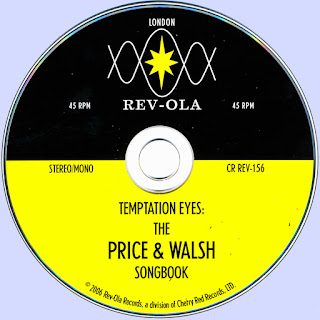