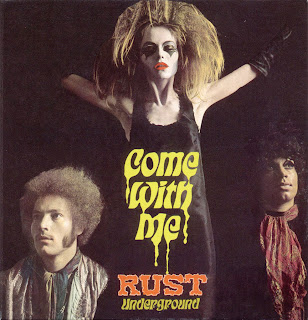 Rust is the real deal. Originally recorded in 1969, their album, Come With Me, is something of a lost mini-classic. Originally released on the independent German label Hor Zu, and bringing it to light in the early 21st century.

Great, psychedelic rock tunes are embellished with phased vocals, treated piano, samples of radio broadcasts, washes of organ, and electronic effects. Mind you, this isn't total freak out music, or anything. Songs like You Thought You Had It Made and Rust revel in blues licks, and rock with a genuine joy, even if the subject matter of their lyrics is somewhat pessimistic, and softer tunes like Please Return and the gorgeous Find a Hideaway are full of acoustic guitars and vocal harmonies.
For a reference point, listening to it I hear a lot of The Deviants, with touches of the 13th Floor Elevators. It's melodic rock that likes to experiment.
by Jeff Fitzgerald 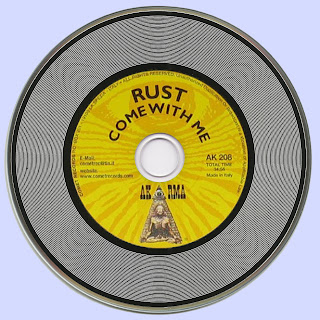 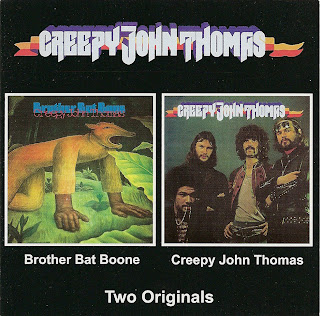 This is one of my favorite psych-blues albums and every track is just to forgotten gem of past generation. Both albums are allocated different guitars, throaty vocals and elastic hard-rock rhythms. John Thomas is John Thomas, nothing else intended.

He came from Australia, where he recorded in the 60s with The Flies. Then moved to London, but soon after settled down in Germany, where he recorded the pretty good psych album "Come With Me" with his band Rust (UK &US members) He then formed Creepy John Thomas with German musicians Andy Marx & Helmut Pohle (who were not amused, when this LP came out with wrong musicians-credits and a bunch of uninvolved hipsters on the cover).This first LP was released in UK too, but sank like a lead elephant. Next was the album "Brother Bat Bone" 1970, a German only release on Telefuken, and one that's pretty weird as well released on LP by Decca - in Germany.

Reissue by Progressive Line on one disc contains two excellent albums (in order: second album of 1970 and then debut of 1969) Debut RCA orange label ,includes a brief, 3-minute tracks maintained for the 1969 typical hard / folk / psychedelic climates. However,second album ( released on LP by Decca - only in Germany) are only 6 tracks full of heavy blues rock from of the highest shelf...forgotten, British band playing heavy psychedelic / progressive rock,first,lots very juicy play guitars, nice vocals solid rhythm section - a complete success. Previously, John Thomas played in the Rust and then in the Edgar Broughton Band (on LP: Bandages ).

Debut LP Creepy John Thomas (1969) starts with hard blues tune, "Gut Runs Great Stone" with great rhythm that just kicks you at the very beginning, making you headbang and simultaneously tap the rhythm with your hand. Next tune is my favorite, it's "(Do I Figure) In Your Life", chilled psych classic rock tune. Lyrics are solid but fluid, they go great with melody. And melody is real thing here - although it's just few chords chaning in the background, second guitar runs around whole song and adds sweet guitar licks. Bass with drums makes solid groove and nice background - but highlight of this song is ingeniously executed sweet solo - it's one of those Hendrix's solo, with so much emotions that after few listening it became one of my favorite solos.

"You've Gotta Hide" is bluesy tune with solid elements of pure classic rock, chorus is catchy and it's good fitter on first side of album. "One Way Track Blues" is awesome blues riff, lead on acoustic guitar and filled with riffing on electric guitar. Vocals are good-fitting and are totally bluesy, with sour tone but with strenght on finish. Solo is another great thing in this tune. I've noticed that they're singing "...Left my house, spend my time, Blue Cheer, plunder sky..." which left to conclude that they were probably in good releationship with Blue Cheer while Thomas was in San Fran. "Trippin' Like A Dog" is another Muddy Waters-stylish blues tune but with psychedelic guitar wailing through whole song.

"Ride A Rainbow" is psychedelic-trip themed tune, made by hippies for hippes - oriented on peace, unity and love. Thomas' guitar talent is obvious - with his psych-bluesy guitar sound he's painting every song with colors of vivid picture. Next tune, "Green Eyed Lady", instantly reminded me of bass groove on "The Other Side Of This Life" by mighty Jefferson Airplane, which proves Thomas' connection with San Fran scene. Although bass sounds similiar, this song is nothing like upper mentioned. If anything's been really catchy here - than "Sun and Woman" is winner. Guitar is so cheery and catchy, it'll stuck in your head for weeks.

Pumping rhythm of "Lay It On Me" will really satisfy you, and knitlling of guitar will make you love this band. It's funny how they use chorus from "Ride A Rainbow" in this song, just like that, in the middle of song - you'll hear part from previously mentioned song. "Bring Back The Love" will wake oriental side in you. There's bongos and sitars, outrhythmic singing - like in a middle of some ritual. However, ender song could be better. Realising strenght of this album, I would expect psych-bluesy version of, let's say, 10 minutes long jamming, but it ends with cool but rather short tune.
by Adamus67 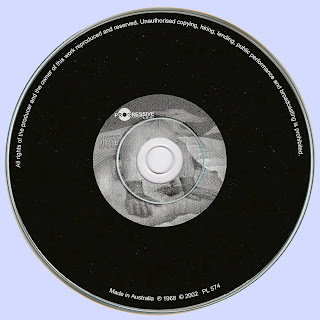 Free Text
Text Host
Posted by Marios at 10:15 AM 5 comments: