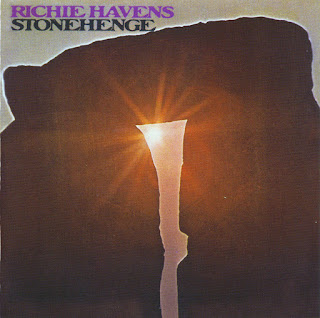 Richie Havens was born in Brooklyn, New York, the eldest of nine children, formed street corner doo-wop groups with his friends, and sang with the McCrea Gospel Singers at the age of 16. Although he had already visited the artistic hotbed Greenwich Village, to read poetry, he was 20 before he moved there to live, soon learning to play the guitar and performing in the Village's folk venues, where this 6ft 6in tall African American stood out in the largely white clubs.

His distinctive guitar playing and soulful, gruff singing style quickly marked him out as a performer to watch, and after a couple of albums on the Douglas label, Havens was signed up by Bob Dylan's manager, Albert Grossman, who secured a record deal with Verve Records.

The first album with Verve, Mixed Bag (1967), included his own anti-war ballad, Handsome Johnny (co-written with the actor Louis Gossett Jr), and a handful of covers, including John Lennon and Paul McCartney's Eleanor Rigby and Dylan's Just Like a Woman. As with all his subsequent covers, he made the songs his own, with his highly rhythmic guitar accompaniment.

In 1968, he told the American folk music magazine Sing Out! that he wanted to put "the intonations of America" on Eleanor Rigby and other Lennon and McCartney songs. A couple more albums were released before Woodstock – Something Else Again (1968) and Richard P Havens, 1983 (1969). The latter included an apocalyptic vision of the future inspired by George Orwell and was his first album to make the US top 100 charts.

His Woodstock success encouraged Havens to found his own record label, Stormy Forest, and although the first album, Stonehenge (1970), was more subdued than his Woodstock audience expected, his next record, Alarm Clock (1971), indeed became a wake-up call: it was his highest charting album, and a single of George Harrison's Here Comes the Sun made the US top 20.

Havens went on to release several more albums through the mid-1970s, although it was his live performances that earned the greatest praise. In the same year as Woodstock, he appeared at the Isle of Wight festival, and the studio audience for his appearance on The Johnny Carson Show in the US was so enthusiastic that Carson invited him back the following evening – only the second time this had ever happened.

During the 1970s, Havens diversified into acting. He starred in the original stage performance of the Who's Tommy in 1972 and took the lead role in Catch My Soul, the 1974 film based on Othello. He co-starred with Richard Pryor in the 1977 film Greased Lightning.

Into the 1980s, Havens continued to tour and record, although he never improved on his previous chart success. His voice was heard on McDonald's adverts all over America, singing Here Comes the Sun, and he collaborated with the British electronic music duo Groove Armada – their song Hands of Time featured on the soundtrack of the Tom Cruise film Collateral (2004).

From the 1970s, Havens became concerned about educating young people about ecological issues. He co-founded a children's oceanographic museum in the Bronx, the North Wind Undersea Institute, and encouraged young people to have a hands-on role in making a positive contribution to improving the environment.

His 1993 retrospective album, Resume: The Best of Richie Havens, did much to remind a new audience of his back catalogue. In the year it was released, he appeared alongside Joni Mitchell, Judy Collins and Arlo Guthrie at the Troubadours of Folk festival in Los Angeles. A capacity audience would not let him leave the stage at the end of his concert. He later described it as a "Greenwich Village class reunion".

Havens sang at Bill Clinton's 1993 presidential inauguration and also performed several times for the Dalai Lama. He appeared at the 30th and 40th Woodstock anniversary celebrations, and at Dylan's 30th anniversary concert in 1992, where he sang Just Like a Woman. His autobiography, They Can't Hide Us Anymore, was published in 1999; the title refers to his thoughts during his helicopter ride over the Woodstock crowds in 1969. His last album was Nobody Left to Crown (2008).

Havens's repertoire was always a mixture of his own compositions and covers of other songwriters: he had a special talent for interpreting other people's songs, always delivered in his soulful, fiery and passionate vocal style with his attacking, urgent, rhythmic guitar accompaniment.

After kidney surgery in 2010, Havens retired from touring. He is survived by four daughters. Richie passed away April 22nd 2013.
by Derek Schofield 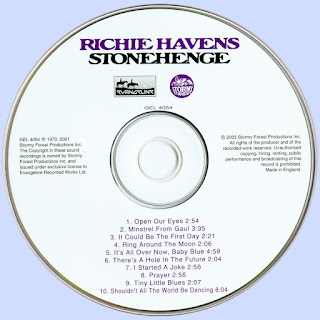