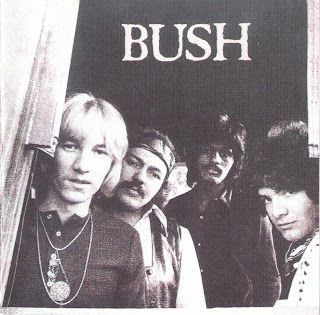 Also an alumni of Robbie Lane and The Disciples, when Dominic Troiano left Mandala in 1969, he was looking for a change from the high class big band r&b rhythms. Along with Mandala-mates vocalist Roy Kenner and Pentti 'Whitey' Glan on drums, they moved to Arizona early the next year to get different musical vibes and a fresh start. They recruited bassist Parkash John and began playing the circuit, cutting their teeth on the harder blues based riffs and less sophisticated material they were trying out on a hungry market looking for something different to wet their appetite.

They caught the attention of Reb Foster, an LA disc jockey while he was in Arizona. Foster ran a management company through his Cuordoroy Records that was affiliated with ABC/Dunhill Records. He agreed to manage the band and had them signed to Dunhill in early 1970. Bush in fact was the first band to sign with Cuordoroy. They got bigger gigs, opening for the likes of Steppenwolf and Three Dog Night, but found themselves in the middle of a nightmarish R'n'R political BS situation as they prepared to release their first lp. ABC/Dunhill sued Cuordoroy, and Bush became the football, punted back and forth with no one ever scoring.

Their first and only lp was self-titled and like the band's name, straight forward, simple, catchy and easy. Tracks like the lead off "Back Stage Girl, "Got To Leave The City," "Messin' Around With Boxes" and their only single "I Can Hear You Calling" all showed Troiano and company were looking for a different direction, straight to the bones driving rhythms. The reminiscent "Yonge St. Patty" paid homage to 'the girls from home,' not far from where Troiano grew up.

They carried along the dusty trails but by early the next year, they were broke. The band packed it in, but Troiano and Kenner weren't out of work for long. The James Gang came knocking on Troiano's door to fill Joe Walsh's guitar duties, and he convinced them Kenner would be the perfect vocalist for them. Troiano then would go on to join The Guess Who and cut several solo albums, as well as form his Black Market project before becoming immersed in production and behind the scenes work, scoring a number of soundtracks for film and television. Kenner would also appear on again off again in Troiano's solo projects, as well as in Black Market, as did John, who also went on to record with Alice Cooper, along with Glan.

The album was re-released in 1995, but not without controversy. Around the same time that Troiano was remastering the album, a band came out of Britain with the same name. To avoid legal hassles, they changed their name to Bush X for their Canadian release. The original Bush did indeed re-release their only lp, but oddly - with a different cover. Also included were four live tracks from the last show they ever performed at LA's Bitter End club with Three Dog Night.

Two years later, Troiano and Gavin Rossdale, leader of the British band held a press conference in Toronto to announce they'd been given permission to use the 'Bush' name on recordings. 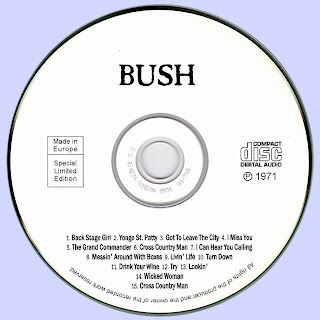 Free Text
Just Paste
Posted by Marios at 10:13 AM 5 comments: