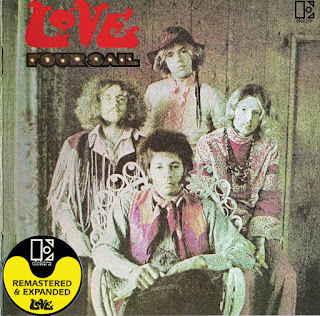 My favorite Love album is Four Sail (Elektra 1969). None of the original band members save for Arthur Lee are on this one. This album is an extraordinary voyage across genres. If it wasn’t so diverse and well-executed I might have written this album off as “pretentious, too proggy, jammy, etc…” but the musicianship is superb and tasteful, and everyone minds each other’s boundaries even at the album’s most intense moments.

The album opens with “August,” which wails away for five minutes. “Your Friend and Mine” is the perfect counterpoint/follow-up to the opening track; a beautiful baroque pop tribute to a friend who’d overdosed and died. The lyrics are heartfelt, yet vague enough to be played at any funeral.

“I’m With You” is a very fluid and sweet uptempo number. “Good Time” starts out smooth as a pebble with a muted jazz guitar tone, and then transitions back and forth into shaking foundations and rocking the fuck out. “Singing Cowboy” rocks with a soulful mannerism and an awesome extended break. “Dream” is just a damn good ballad about nothing in particular, with really cool overdubbed whispers.

“Robert Montgomery” sounds like Eleanor Rigby only for just a second, then turns into a totally different song. “Nothing” seems to be written about exactly that. The weird, enigmatic lyrics hint at this having been a leftover for the Forever Changes album that didn’t get recorded.

“Talking In My Sleep” is an absolute treat with exemplary vocals and some odd harmonies that are totally reminiscent of Queen. I have long speculated that Freddie Mercury and/or Brian May dug this and used it as a sonic blueprint for part of their sound. “Always See Your Face” is a sweet and beautiful soul ballad which was featured in the movie High Fidelity. The brass treatment gives it a very English feel.

One of the recurring themes throughout this album is the doubled vocals. Listen to the way Arthur Lee adeptly recorded another nearly identical vocal track over the original takes, making only subtle differences (sometimes in pitch, and sometimes with lyrics).

It is my opinion as a long-time musician and songwriter that there is not a bad tone or a single poorly-recorded instrument on this album. From croon to howl, shout to whisper, Arthur Lee covers just about every verb in the vocalist’s lexicon. I can’t be sure that Arthur Lee was responsible for writing every song on here, but the bottom line is, I’d like to see more musicians dedicate more effort and attention to detail into crafting songs like these. They are irregular and odd, yet somehow wonderfully palatable and diverse. They are original and enjoyable, excellently non-linear, and most importantly turn your brain on. Four Sail, indeed.
by Kyle Hoffman, October 14, 2014 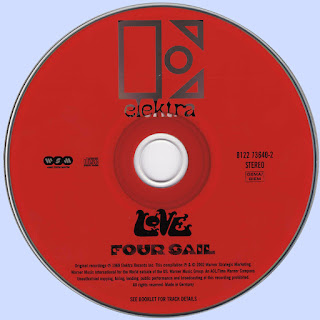 Free Text
Text Host
Posted by Marios at 7:49 AM No comments: