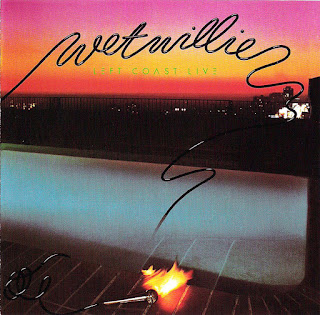 Originally released in 1977, the second live album from these funky, soulful southerners was reissued in 1999 with five extra cuts, adding a whopping 30 minutes to the original vinyl record's limited playing time. With a completely different track listing than 1973's excellent Drippin' Wet, Left Coast Live captures all that was memorable about Wet Willie.

They tear through soul standards, like Jimmy Reed's "Shame, Shame, Shame," Little Milton's "Grits Ain't Groceries," and a shimmering 13 minute slow blues version of Billy Eckstein's "Jelly Jelly" (featuring guest guitarist Toy Caldwell on loan from the Marshall Tucker Band), with obvious passion for not only the songs, but for performing them in front of an enthusiastic audience like the one fortunate to be at this 1976 second set at L.A.'s Roxy club. Lead vocal, sax, and harmonica man Jimmy Hall is in solid form as he hoots, hollers, shouts, moans, and blows like the soul men he obviously idolizes and the band, now tightened through almost a decade of playing one night stands, chugs along like a fine tuned engine pumped with high octane gas.

Pianist Mike Duke pounds the ivories with religious fervor and guitarist Ricky Hersh plays with barely controlled passion throughout. Featuring touches of gospel on "Ring You Up," Sly Stone styled funk with "Baby Fat," and southern fried R&B on their show stopping 12 minute version of "Lucy Was in Trouble," it's evident how overlooked this group was as one of the most eclectic, soulful, and talented bands to emerge from the glutted '70s southern rock circuit.

Oddly the album's least impressive moment is a rote rendition of their biggest hit, "Keep on Smiling," played without the energy injected into the rest of the show. Wet Willie lost the majority of its original members and direction after this final, contract fulfilling Capricorn release, but Left Coast Live remains a compelling and often exhilarating document of a gifted band in their prime.
by Hal Horowitz 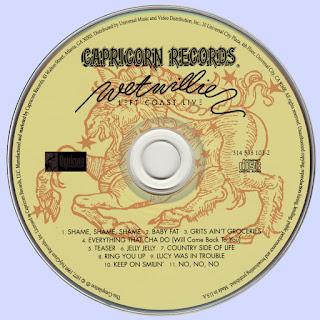 Free Text
Text Host
Posted by Marios at 8:18 AM 3 comments: