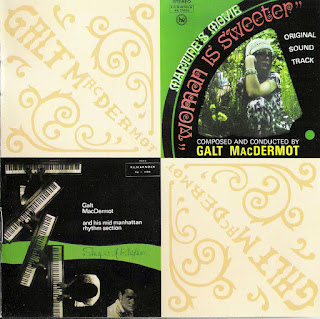 In a career packed with varying types of compositions, Galt MacDermot is still best-known for the music he wrote in the late-'60s Aquarian musical Hair. Born and raised in Montreal, MacDermot was the son of a Canadian diplomat. He studied at Bishop's University, then at the University of Cape Town in South Africa, before moving to New York in 1964. Three years later, MacDermot's music for Hair, combined with lyrics by James Rado and Gerome Ragni, made the show first an off-Broadway success, then a Broadway smash, and later a major motion picture. Of the several pop standards are "Let the Sunshine In," "Aquarius," "What a Piece of Work Is Man," "Good Morning Starshine," and the title song. In addition to the musicals, Two Gentlemen of Verona and The Human Comedy, MacDermot composed ballet and film scores, chamber music, band repertory, and drama accompaniments. Also, he formed the New Pulse Jazz Band in 1979.
by John Bush

This CD brings together two of MacDermot's original LPs, both of them released in the '60s -- one pre- and one post-Hair, one a session album and one a soundtrack, and both greasy in the future funk with cats like Idris Muhammad and Bernard Purdie laying down the beats behind the band. MacDermot is a driven pianist and organ grinder who sought one thing on these records: funky grooves. And he got them. Here's what's scary though: "Coffee Cold" (from Shapes of Rhythm) was recorded in 1966 -- prefiguring the rhythmic changes of James Brown's "Cold Sweat" in sequence and in key a full two years before Brown laid down his track.

The feel of "Coffee Cold" is a bit whiter and smoother, but the jam is still an anthem, even with its cheese factor. MacDermot was a prophet of the groove that would overtake the late '60s and early '70s, and, were he a proud man, could have argued that more young musicians heard and took to heart the grooves he laid down in Hair than heard Allen Toussaint and Red Allen or Eddie Bo. The true feel of Shapes of Rhythm is like Vince Guaraldi's Schroeder laying out the piano funk, seeking the groove inside the rhythm section and laying it out there. It's tough if ornate and it shimmers with real heat. The other disc, a soundtrack for Martine Barrat's movie Woman Is Sweeter, is a much dirtier, rawer affair altogether, and would have been worth the price of the CD alone.

Here guitars chunk up in the cut with the bass, and the piano floats in the accents as drums and bass reign supreme. This was recorded immediately after Hair, and MacDermot wasn't in the mood to simply lay out some incidental music to a hippie flick. He took it down to its essence: rhythm, polyrhythm, drums, bass, and filthy nasty funk at insanely fast -- for the time -- tempos that were in fact symbolic of the orgiastic nature of his compositions. This wasn't just sex music, this was group sex symphonic music made with only a handful of instruments. These two albums comprise 26 tracks of pure groove-driven genius, with a bonus vocal version of "Coffee Cold" that the producers go hog-wild over in their notes, but it pretty much sucks compared to the rest of this -- thank the gods they left it until the end. Yeah, you need this if you care about the influence of '60s groove at all. After all, Busta Rhymes did -- check out the sample of MacDermot's "Space" on the rapper's "Woo-Hah!! Got You All in Check."
by Thom Jurek 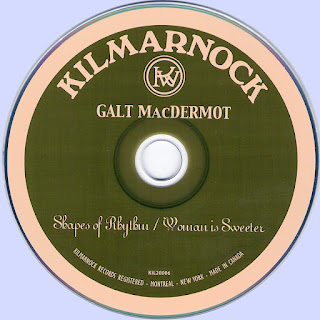 Free Text
the Free Text
Posted by Marios at 4:36 AM 3 comments: