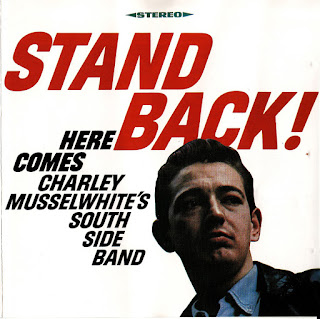 If not, let me quickly explain that these young men, and a few others like them, have been the prime movers in the latest thrust of the urban folk music revival, the move to the tough, powerful sound of the postwar blues—the loud, mean, insistent blues style developed in the Negro ghettos of the Northern cities in the late 1940's and early '50's by such bluesmen as Muddy Waters, Howlin' Wolf, Little Walter, John Lee Hooker, Junior Wells, Otis Rush, Magic Sam and Johnny Shines, among a great many others.

The content and style of this strong, vigorous music have been handsomely defined and documented in Vanguard's three-disc survey of modern blues approaches, Chicago/The Blues/Today! the listener is respectfully referred to them; for providing a comprehensive sampling of current blues approaches, and demonstrating the breadth and richness of the music, I know of no more " representative or convenient set of recordings.

In recent years, an increasingly large segment of the folk music audience has come to discover the power and vitality of the postwar urban blues. Inevitably, too, a number of skilled young folk revivalists have turned their talents to this strong contemporary Negro music. Generally they have been far more successful in bringing these latter-day styles to life than have those who sought to reanimate (at best), reinterpret, or recreate (at worst), the older, more apocalyptic country blues idiom.

Not surprisingly, the most successful attempts at essaying modern blues styles have come from the young men listed above, all residents of Chicago and, as such, immediately and directly in touch with many of the living sources of the music. It is no mere accident that they should have attained to such idiomatic fluency in the urban blues approaches; they have been able to learn, assimilate and perfect the music through the simple expedient of having played alongside of the men who shaped it in the first place.

Charley Musselwhite learned his blues harmonica directly from the Negro innovators on the instrument: Little Walter Jacobs, Big (or Shakey) Walter Morton, and "Junior" Wells, among others. Then he further sharpened his skills in years—literally—of playing with various Negro bands in the rough-and-tumble bars and lounges that dot Chicago's South- and West-Side Negro ghettos.

It is the mark of this most demanding of apprenticeships that stamps the work of the young Chicago bluesmen with such conviction and authority. Quite simply, it separates the men from the boys; you can't shuck at Theresa's, Pepper's, the Blue Flame, the J & C Lounge, or any of the countless other clubs where blues are to be heard in the city. You either hold up your end or you're run off the stage. It's as simple as that.

It may be a hard, ruthless system, but it produces artists. Charley Musselwhite is a case in point, a man who has learned his lessons well, has put in his term of apprenticeship (and, in fact, is still doing so), has paid his dues. This is his first recording as a leader, though he has earlier appeared as a sideman with Big Walter Horton in the third volume of Vanguard's Chicago/The Blues/Today! set, with John Hammond on his Big City Blues and with singer-guitarist Tracey Nelson on her Prestige set.

But this disc represents, in a very real sense, Charley's debut—as the fulcrum of a typical hard, powerhouse, Chicago-styled band of the kind with which he's been used to playing over the last few years. It was he who picked the sidemen, he who organized and supervised their rehearsals, he who selected the materials to be recorded, and it is his intensive singing and incisive playing that are featured throughout this album.

The Musselwhite band's music is tough, direct, powerful, providing his assured, idiomatic voice and harp, the perfect setting and foil. As this first recording suggests, Charley is right now one of the handful of young blues interpreters who have succeeded in penetrating beyond the surface of the music to the development of a thoroughly satisfying, recognizeably personal approach to the modern blues. In the coming years, his single-minded dedication to the music, his ever-deepening technical skills, and his thirst for new ways of expression, are sure to yield an even richer musical harvest.

Listen to where he is now, and then recall that he is 22. And this last statement is hardly meant as an apology or justification; quite the contrary, it's a frank expression of acclamation from a devoted friend and admirer.
by Pete Welding 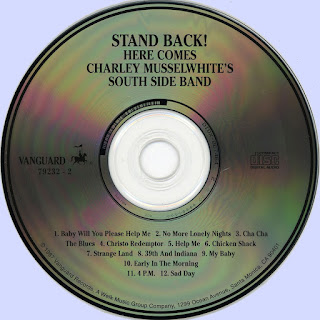 Free Text
Just Paste
Posted by Marios at 12:30 AM 3 comments: