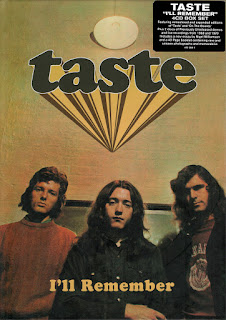 At long last Rory Gallagher’s first band, Taste, in both its incarnations, gets its due in the form of the 57 track, nearly five hour long four disc box set “I’ll Remember.”  The first two discs contain the band’s two LPs, 1969s “Taste” and 1970s “On The Boards” each album being supplemented by bonus tracks.  Disc three contains live tracks from Sweden and London recorded just before the band called it a day in 1970.  Disc four contains recordings, studio and live, performed by Taste Mk. I, with Gallagher joined by bassist Eric Kitteringham and drummer Norman D’Amery, who were replaced by Richard McCracken and John Wilson.  Kudos to compiler Daniel Gallagher did a great job of representing Taste, Mk. I and Mk. II.
“I’ll Remember” opens with “Blister On The Moon” a re-recording of half of the original lineup’s unofficially released Major Minor label 1967 single.  The tune was joined by the rocking “Born On The Wrong Side Of Time” on the single and was likewise re-recorded for inclusion on “Taste” which was released in April, 1969.  “Blister” is a great vehicle for Gallagher’s guitar and has a hook ideal for AM radio, yet somehow was never officially released on 45.  In fact either of the tunes would have been a great a-side.  “Taste” is filled with blues rock tunes, a mixture of originals, covers and arrangements of traditional material with  Gallagher’s guitar dominant, such as his incredible slide work on “Leavin’ Blues.”  Two traditional songs arranged by Gallagher, “Sugar Mama” and “Catfish” give him a chance to stretch things out with run times of seven minutes or more each.  In addition to the album’s original nine tracks the disc contains six alternate versions as bonus tracks.  The LP showcases blues rock at its very best.
Disc two is built around the band’s second and final LP “On The Boards.”  Released on New Year’s Day, 1970, the album reflects the group’s musical growth.  The opening track “What’s Going On” is a hot little rocker, clocking in at just under three minutes and most definitely a radio friend number that would have been an ideal selection for a single.  With its second album Taste showed increased versatility with jazz influences apparent throughout, and Gallagher playing alto saxophone on two of the LP’s ten tracks including the breezy “It’s Happened Before, It’ll Happen Again” on which he begins playing guitar before switching to sax.  However, it is still Rory’s guitar that dominates the album, especially on scorching numbers like “Morning Sun” and the slide guitar driven “Eat My Words.”  The six minute title track showcases Taste’s versatility with Rory’s guitar quietly steering the band and the listener into the land of mellowness leading Gallagher to once again pick up the sax.  The album’s ten tracks are joined by six bonus tracks, including the audio from four performances on the “Beat Club” television show.
Disc three opens with eight tracks recorded live at Konserthuset, Sweden in 1970.  Dominated by Gallagher’s guitar the set includes extended takes of tunes from both of the band’s albums as well as four non-LP tracks including the slide workouts “Gamblin’ Blues” and “Sinner Boy” and the blues drenched “At The Bottom” and “She’s Nineteen Years Old.”   The disc also features five tunes recorded by the BBC at the Paris Theatre in London beginning with an unbelievable take on “I’ll Remember” stretched out to double the length of the three minute studio version with Gallagher’s guitar leading the way from beginning to end. The 78 minutes on this disc are representative of Taste Mk. II’s incredible live sound.
“I’ll Remember” closes with a disc of recordings by Taste Mk. I.  The first nine tracks on disc four, recorded in Belfast, are the oldest surviving studio recordings of the band.  Among the tracks are the original takes of “Blister On The Moon” and “Born On The Wrong Side Of Time” which, as previously mentioned, were released and then immediately withdrawn as a single on the Major Minor label.  The material is much more traditional blues oriented than that of Mk. II.  Standout tracks include the guitar workouts “Norman Invasion” and “How Many More Years.”  The final five tracks were recorded live at the Wobum Abbey Festival in 1968 and are evidence that Taste Mk. I could rock like hell live!  The band was so fresh that following their performance of Gershwin’s “Summertime” Gallagher is heard saying “thank you” more than a dozen times!  This is followed by a stunning take on “Blister On The Moon” featuring Rory at his heaviest.  Also included is an obviously Muddy Waters influenced version of “I Got My Brand On You.”  The set closes, quite appropriately, with a spirited medley of blues classics, “Rock Me Baby/Bye Bye Bird/Baby Please Don’t Go.”
The book style box set, designed by Phil Smee at Waldo’s Design and Dream Emporium, is rounded out by a 40 page full color booklet.  Complete track annotations are joined by a Nigel Williamson essay and tons of gorgeous photos.  Aside from the Isle Of Wight concert, issued separately, “I’ll Remember” is the last word on Rory Gallagher’s earliest work.  The sound, mastered by Paschal Byrne at the Audio Archives in London, is impeccable, even the early live recordings.
The bottom line is that “I’ll Remember” was one of the very best reissue compilations of 2015 and is an absolute must for blues rock enthusiasts and serves as a wonderful document of Rory Gallagher’s first recordings.  I cannot recommend this set highly enough.  There is not a weak link among the collection’s 50-plus tracks.  Make sure you grab a copy of this incredible box set before it goes out of print.  It is absolutely essential!
by Kevin Rathert, 2016 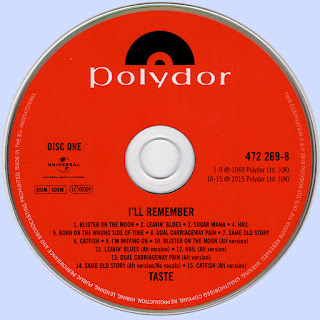 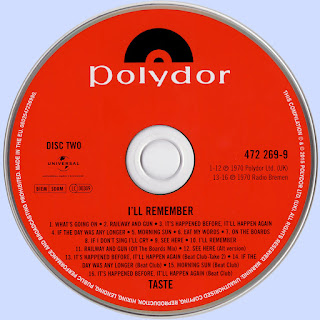 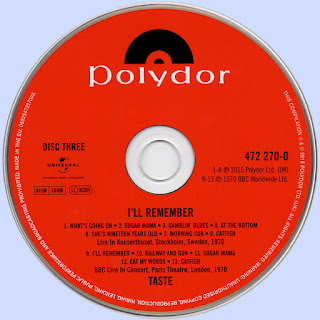 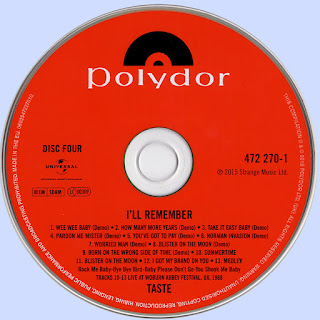