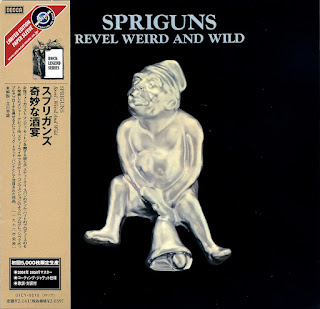 Originally a folk duo formed in 1972 by husband and wife Mike and Mandy Morton, they released their debut album Jack With A Feather in 1975 under the name Spriguns Of Tolgus. It contained mostly traditional tunes and was produced by Steeleye Span's Tim Hart which gives a fair indication of where they were coming from musically at the time. It also brought them to the attention of a major label, Decca Records, and after reducing their name to the more economical 'Spriguns' they released Revel Weird And Wild and Time Will Pass in 1976.
In addition to the change of name, the Morton's established a new band for the recording of Revel Weird And Wild which included Tom Ling (electric violin, vocals), Dick Powell (electric guitar, keyboards, vocals) and Chris Woodcock (drums). Mandy provided the lead vocals and acoustic guitar whilst Mike took care of bass guitar and vocals. Tim Hart was once again responsible for production and guesting on pedal steel guitar for two tracks was the imitable B.J. Cole. The end result was more rock friendly than its predecessor although their folk roots were still very much in evidence as track titles like Trysting Tree and Piscie Song testify.
Whilst the songs on Revel Weird And Wild are all original compositions penned mostly by Mandy Morton, they have an earthy folk charm thanks to her warm and sensitive delivery, the story-telling lyrics and the traditional instrumentation. Mandy's singing has been misleadingly compared to Steeleye Span's Maddy Prior even though her tone is less distinctive and closer to the late Sandy Denny and the neutral side of Kate Rusby. This she uses to good effect, sounding suitably melancholic or playful (as in Piscie Song) as the mood takes. Violinist Tom Ling also plays a major role, shining throughout with a succession of lively jigs, reels and hornpipes during Outlandish Knight, Sir Colvin and Nothing Else To Do. Elsewhere as in Hasberry Howard and Lord Lovell his playing is masterfully rich.
B.J. Cole's pedal steel appearances are brief but sublime adding a country tinge to Trysting Tree and When Spring Comes In (but he can be forgiven for that) whilst Dick Powell provides beautiful, rippling piano for Sir Colvin and When Spring Comes In. Laily Worm features strong, almost a capella harmonies whilst electric guitar and bass add an edge to the multi-part Outlandish Knight and the instrumental Hasberry Howard. Regular visitors to this website will also be encouraged by the fact that in true prog fashion the longer songs are divided into several distinct sections. Perhaps the only drawback to Revel Weird And Wild is the drums could have been more prominent and the production punchier.
by Geoff Feakes 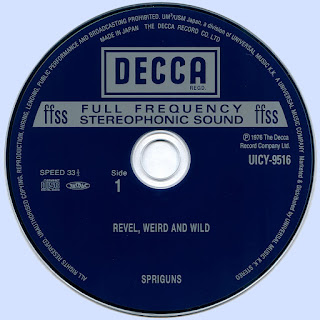