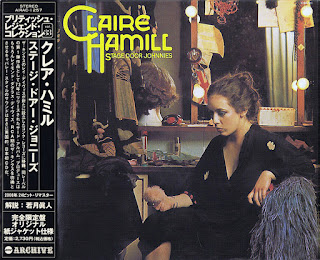 Claire Hamill was born in Middlesborough in Northern England and has been in the music business since she was 17. In 1970 she was launched as one of Britain's first singer songwriters and seen by many commentators as in the vein of Joni Mitchell.

The album was "One house left standing" which showed the singer in a backdrop of her home town and a year later she went on her first U K tour supporting John Martyn.Up to 1973 she toured the USA with Procol Harum and Jethro Tull and came back to Britain to record her next album "October" at the same Manor studio of Richard Branson which Mike Oldfield was using to make what became "Tubular Bells".Her next tour support was for King Crimson.

In 1973 Claire Hamill met Ray Davies who signed her to his Konk label for her 3rd album "Stage Door Johnnies" an album which included her first covers. We Gotta Get Out Of This Place – (Mann, Weil) – the Animals worldwide hit from 1965, nothing can top that but this is suitably agrressive and angry.

Oh Daddy (Blues) (You Don't Have No Mamma At All) – (Herbert, Russell) – First recording by Ethel Waters, Cordy Williams' Jazz Masters (1921)  but associated with  Bessie Smith (Clarence Williams at the Piano) from 1923. It has been done by a lot of folk blues jazz types in both instrumental and vocal versions. This is a good version and not dissimilar to what Ray was doing on some tracks of the Kinks "Muswell Hillbillies" (1971) album. All The Cakes She Baked Him – very Joni Mitchell but very good. Trying To Work It Out – more Joni. Geronimo's Cadillac – (C. Quarto, M. Murphy) – Co-written and recorded by American country singer Michael Martin Murphey in 1972 (also the title cut of his 1972 debut album) the song went to #37 in the US pop charts. The song has been often covered. Here, it sounds like a sister piece (in mood) to The Kinks' circa 1971. Very good.

You Know How Ladies Are – quite beautiful with a touch of Ray Davies. Luck Of The Draw – very good with some nice up front twangy guitar and some hard lyrics. Stage Door Johnnies – Ray would love this … and so do I. Stage Door Johnnies was a English theatre reference to wealthy gentlemen who would wait outside the stage door hoping to escort chorus girls hem to dinner. The attract for the girls was (hopefully) marriage into the upper class, society and nobility.
With a little help from Frank... 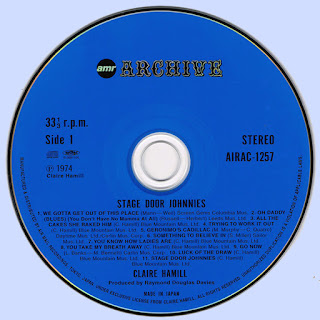 Free Text
Text Host
Posted by Marios at 6:13 AM No comments: