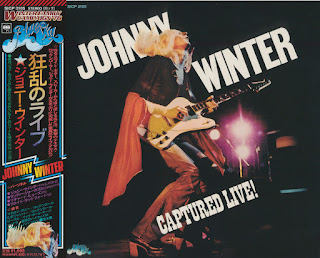 Here's another classic from the archives. Recorded in 1976, this is one of my all time favorite live recordings. Johnny is simply smokin' on this CD. The audio quality is very good and really captures the powerful sound of a live performance in a large outdoor venue. The four member band of two guitars, bass and drums features Floyd Rradford on second guitar. Floyd is an excellent guitarist, although his style is more technical than emotional, especially when compared to Johnny. Yeah, I know, Johnny is about as technically proficient as they come, but he still has a very strong emotional quality to his playing.
OK, I'll admit that as a blues-rock CD, this disc is heavy on 70's rock 'n roll. But Johnny plays some awesome blues leads and rhythm riffs throughout. And the set's closer, "Sweet Papa John", is slow power blues at it's best, featuring some very strong slide guitar work and classic Johnny Winter vocals. This is one of those CDs on which it is difficult for me to choose favorite songs. The CD overall is a continual transition from one hard-rockin' song to the next. Every song in the set is killer and filled with animated guitar playing. And even though the set's slow blues closer starts off at a bit of a relaxed paced, it builds to a high intensity barrage of guitar licks.
"Highway 61 Revisited" showcases Johnny's abilty on slide guitar, as it gets down to just him and the drummer for a long lead break for a good portion of the song. This song provides all the argument I ever need when I get into discussions with others about slide guitar players. Johnny is certainly not the only great slide player around, but he is definitely among the best.
Captured Live gives a great sense of what a Johnny Winter show was like in the 70's, when his music was very popular and drew huge crowds. While Johnny has recorded many excellent CDs, both before and after Captured Live, this one gives the listener a large, high quality dose of Johnny Winter style hard driving rock 'n roll and blues-rock. This is another "must have" for every lover of blues-rock guitar, and at a typical price of $10 at local music stores, is a real bargain.
Electric Blues 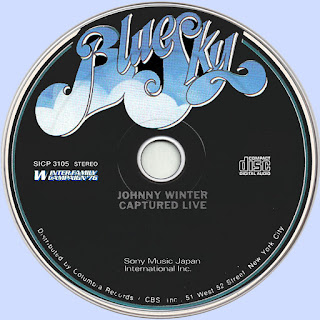