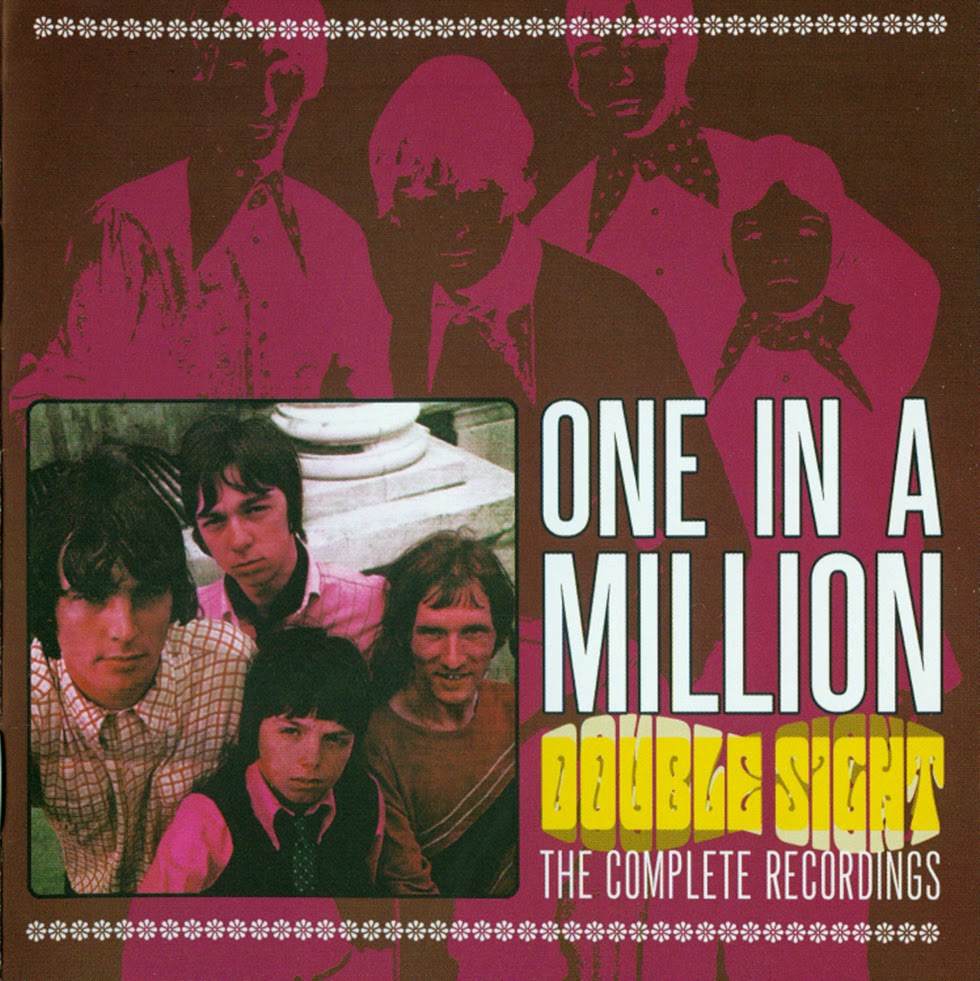 "One In A Million were a Scottish mod/blues band who turned psych sometime in 1967. They featured precocious guitarist Jimmy McCulloch (14 years old, looks nine in the photos) and released second single, the ambitious 'Fredereek Hernando', on MGM that December. Their famous rarity's B-side provides the title for Double Sight: The Complete Recordings (Wooden Hill), which gathers their January '67 single for CBS and a bunch of acetates, including the unreleased putative third 45, 'No Smokes'. Good punchy stuff with street-level edge. 'Double Sight' itself sounds like The Jam, 10 years earlier."
Mojo

"Chocolate Soup For Diabetics was the greatest ever UK psych comp - splintering tunes, ultimate quality control, maximum danger - and only one band got both sides of their forgotten drugged genius 45 included on Volume One. One In A Million lived up to their name, in that they boasted the curious psych-out gimmick of a 14-year-old guitarist called Jimmy McCulloch, along with the extreme-fire attack of that 1967 MGM single, 'Double Sight'/'Fredereek Hernando'. If they could've kept it up, they'd have been bigger than The Who. They didn't. They imploded. "One real weird-out is a group called One In A Million", Julian Cope said of Chocolate Soup in 1983. "Both their featured songs are The Jam if they hadn't 'Souled-Out'. Gruff Weller voice, identical Foxton harmonies, how I wished they'd gone in this direction." There are plenty of other sparks among the other nine tracks - a crunchy mod strut in 'Goin' Places'; the Troggs-ish pounder 'Something On Your Mind', a snippet of Peel - but Little Jimmy and the lads must still be most proud of that one insurmountable 45."
Record Collector

"In recent years the Tenth Planet/Wooden Hill label has been synonymous with noteworthy reissues of English psychedelic beat music, invariably tastefully and imaginatively presented, which would otherwise have remained the province of those sinister purveyors of shoddy illegal merchandise with whom cognoscenti are depressingly familiar. And fuck my old boots if they haven't gone and done it again. What a pleasure it is to hear this wonderful compilation of the official releases and demos of Glasgow's One In A Million, one of the most sacred Chocolate Soup combos.

It kicks off in some style with their momentous MGM 1967 45 'Fredereek Hernando' b/w 'Double Sight', which retains all its poisonous psychotropic potency and then some. Does anyone still have the cheek to proclaim that this historic recording "sounds like a psychedelic Jam"? Lazy journalism just doesn't cover that. What a great single. As if that wasn't enough, you get the sublimely paranoiac 'No Smokes' (the planned "Summer of Love" 45 which some may have encountered on various releases of dubious origin), several fascinating demos such as 'Man in Yellow' and 'The Trial of Elmer Fudd' which, while owing their debt to The Who's halcyon 1966 period, have a unique charm and edge, both in the songwriting and playing, and both sides of their debut 'Use Your Imagination' b/w 'Hold On', which are more poppy but feature some agreeably crunchy fuzz-tone guitar in an Ian 'Tich' Amery style.

This courtesy of the sadly departed Jimmy McCulloch, a mere babe in arms at the times of these recordings; see the liner photos and gawp. David Wells provides detailed, informative and entertaining sleevenotes, including reminiscences from lead singer Alan Young (whose soulful singing is yet another highlight of this release) adorned with the aforementioned photos of the wee lads in all their finery. Indeed, such is the overall quality of this release that I really can't be bothered to end this review with some witty remark, secure as I am in the knowledge that you've all stopped reading this review by now as you're off out to buy your own copy. Quite right too.
Ugly Things 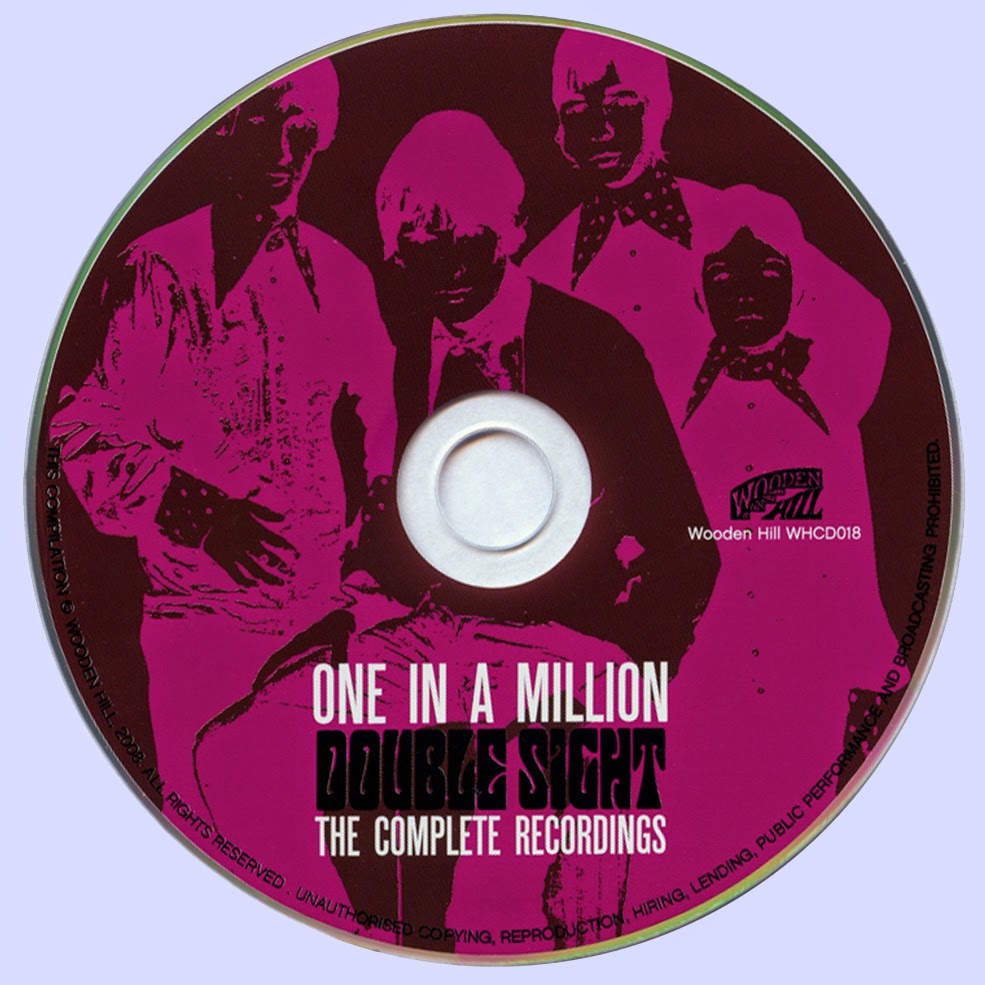 Cat Mother And The All Night News Boys - The Street Giveth And The Street Taketh Away (1969 us, excellent psych classic rock) In the late sixties there were far worse things for a an aspiring rock band than to tour with, and have their debut album produced by, Jimi Hendrix. While such an association was not an immediate passport to fame and fortune, it certainly helped. Such was the case with the wonderfuf/y named Cat Mother and the All Might Newsboys.

Despite a later move to, and many years close association with, rural northern California, Cat Mother were originally a New York City band and evolved out of the Greenwich village folk community. While none of the founding members made a huge impact in their folk days, banjo player Charlie Chin had been a fixture on the basket club circuit for several years and was respected as one of the best pickers around. Of the other original members, Roy Michaels was the only one with a local reputation—he'd been part of the Au Go Go Singers, along with Steve Stills ana Richie Furay.

The Au Go Go Singers split up in mid 1965, just at the time that the Village was experiencing a renaissance. Many previously acoustic folk and blues musicians formed electric bands and the Village clubs rang to the folk rock of the Lovin' Spoonful and The Youngbloods and the soupcd-up blues of the Blues Project. Despite the changes not much happened for Michaels, who carried on as a solo performer, although on occasion he teamed up with future Cat Mother members Bob Smith ancf Michael Esquine, who performed as an acoustic trio.

In early 1967 Michaels and Smith visited California and immediately fell in love with the San Francisco scene. They stayed long enough to attend the Monterey Pop festival, an event that convinced them that not only was rock ana roll the way to go, but also that they should move west permanently. Despite Michaels' and Smith's desire to move to California, things didn't quite work out that way—at least for the time being. Once back in New York, they teamed up with Equine and Chin along with another old friend, Larry Packer.

At the risk of mixing metaphors. Cat Mother was born. Michaels played bass and guitar, Equine played drums. Packer played lead guitar, violin and mandolin, Smith played keyboards and occasional drums and Chin played rhythm guitar ana banjo. All of them sang. The band rehearsed for six months and lived, more or less communally, on East    Tenth Street, in the heart of the lower east side. In due course they became the local hip community's favorite band, playing at numerous benefits and at the series of free concerts in Tompkins Square Park.

By the fall of 1968 they had come to the attention of Michael Jcffery, Hendrix's manager, who signed them to his company and got them a deal with Polydor, who were about to launch tne label m the States. November saw them touring with the Experience, a remarkable piece of good fortune which continued when, during the New York portion of the tour, Hendrix produced their debut album at Manhattan's Record Plant. He was aided by two of his favorite engineers, Gary Kellgren and Tony Bongiovi.

The Street Giveth and the Street Taketh Aivay is a wonderful, eclectic record—a mix of hard driving rock and roll, a dash of funk, some folk-based material and overtones of near eastern music that draw comparison with LA's finest. The Kaleidoscope. The release of the album was delayed until June 1969, when it became Polydor's first US release. A single from the album, "Good Old Rock and Roll," (a medley of several late fifties rock classics, linked by new verses written by the band) became a surprise, but well-deserved hit, peaking at number 21. Fueled by the single's success, the album itself reached 55, a more than creditable showing.

Despite their local New York success, city life was becoming too much for-Cat Mother. In the Spring of 1970, the whole band except Chin, moved to the rural splendor of Mendocino, north of San Francisco, and took over a huge farm house that became their base of operations for several years. Almost immediately they dropped their All Night Newsboys suffix and their music changed as well. The hard rock of the first album disappeared, and future records featured a more relaxed country sound that suited the time and place. Whether the subsequent albums (Albion Doowah, 1970; Cat Mother, 1972; Last Chance Dance, 1973) were as good as the first is debatable; what is true is that the band never repeated the commercial success of The Street Giveth ..., which remains a minor classic of the era.
by John Platt 1997 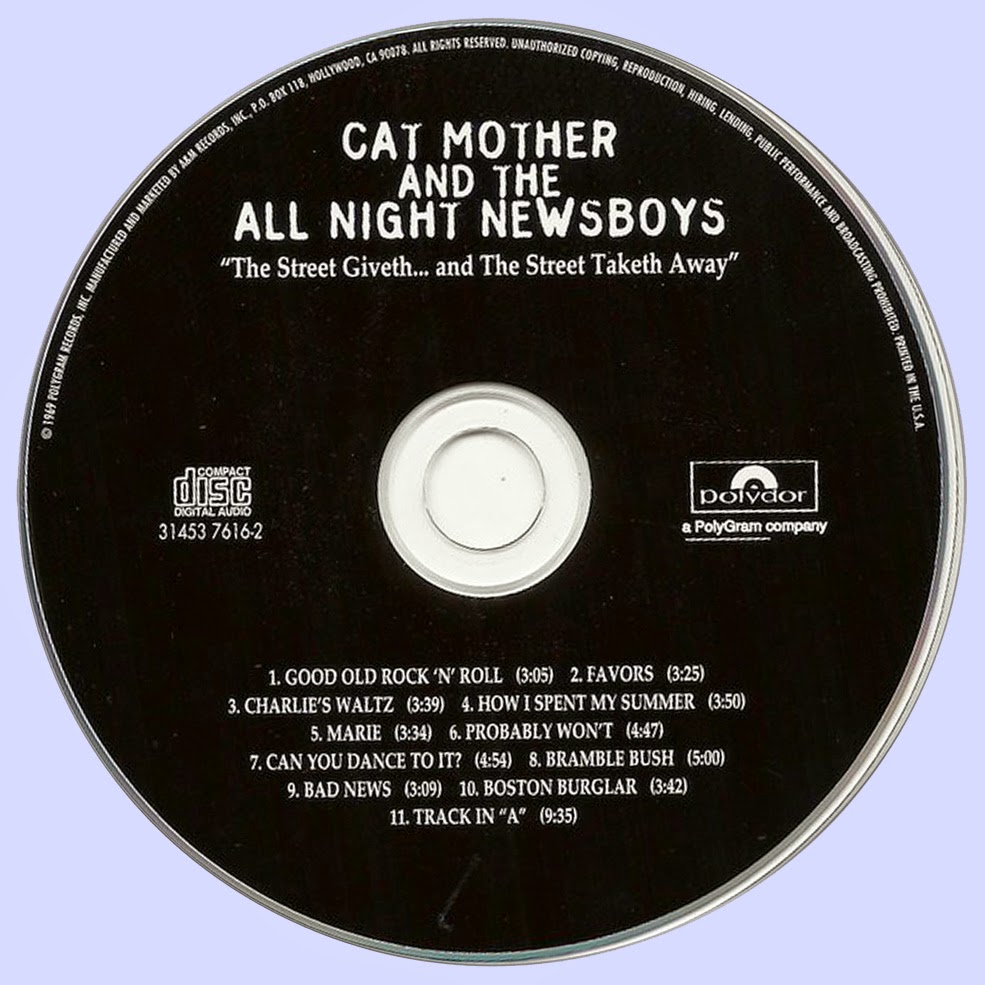 Free Text
the Free Text
Posted by Marios at 4:30 AM 9 comments: