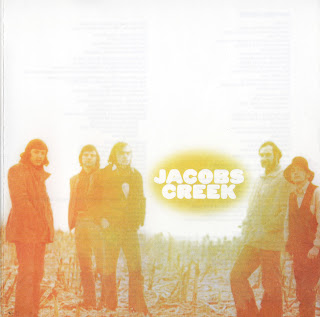 This Trenton New Jersey band was lead by brothers Lon and Derrek Van Eaton, who previousle played with local garage band The Tree, along with drummer Tim Case and are best-known for the subsequent music they made for The Beatles’ Apple label.

They added guitarist Steve Burgh and singer guitarist Bruce Foster to form Elisium in 1968, which morhed into Jacobs Creek. Basing themselves in New York, they played at Andy Warhole's Factory, opened the Doors and soon signed to Columbia, who placed them with producer  Al Lawrence (perhaps best known for his work with Santana).

The quintet's resulting album was issued in August 1969 complete with a lyric insert and touched on pop, rock, country, blues, psychedelia and Folk. With arrangements encompassing electric guitars, horns and sitar, unfortunately the label didn't promote it, and (despite encouranging radio play) didn't sell. The band continue to play around New Jersey

finally splitting in March 1971. Brothers Lon and Derrek Van Eaton put together some home recorded demos as a duo, Apple's manager Tony King liked what he heard and recommended the duo  to George Harrisson who arranged for them to singed to Apple in September 1971 and went on to produce their album, Brother, released next year.