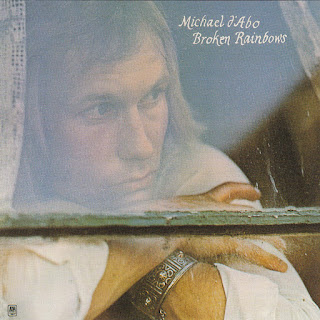 After leaving Manfred Mann, Mike d'Abo had been offered a contract with Immediate Records for which he made one single and one album, both entitled "Gulliver's Travels". Then he switched to MCA Records and his first album was issued in mid 1970, simply titled "d'Abo". His next project found himself scoring for the Peter Sellers/Goldie Hawn movie "There's A Girl In My Soup", and from this came the single "Miss Me In The Morning/Annabella Cinderella" in December 1970.

1971 saw the release of the "Jesus Christ Superstar" album on MCA, on which Mike d'Abo sang the part of Herod. In June 1971 he signed with Chrysalis Records, though nothing of his recorded work for this company was released. Anyway, by the end of the year he changed companies once again, this time to the American A & M Records. The best period of his solo career was just about to begin. His debut album was "Down At Rachel's Place" followed by the single "Belinda/Little Miss Understood". Nothing more was heard from Mike for more than a year, then he re-appeared as composer of five songs on the debut album of John Christie "Relax".

Halfway through 1974, another single emerged: "Fuel To Burn/Hold On Sweet Darling" which served as an introduction to his solo album "Broken Rainbows". It received very favourable reviews, though like his earlier solo outings, it was not successful on the charts.  "Handbags And Gladrags" on this album is not exactly the same song as on the "d'Abo" album on Uni UNLS 114, the album was produced by Elliot Mazer, however, even though Mike d'Abo didn't have any chart success, he could persuade many well known musicians to play on his albums. Artists like Albert Lee, Chris Spedding, Mo Foster, John Kongos, Graham Nash, Mike Bloomfield, and The Jordanaires are well known to all of us.
Mike d' Abo Free Text
Text Host
Posted by Marios at 7:59 AM No comments: