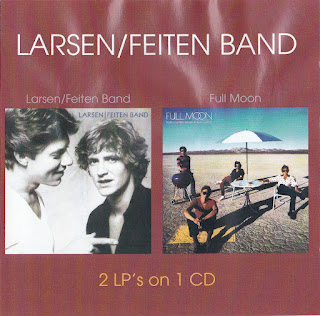 The Larsen-Feiten Band would only ever technically release one album under that name, a 1980 self-titled outing, but its members were in such hot demand as sessionmen that it’s questionable if the band could have remained a full-time project. Keyboardist Neil Larsen had played on records for everyone from Don McLean and Dan Fogelberg to Richard Thompson and George Harrison, even penning several album cuts for the likes of George Benson (“Windsong,” “Stand Up”), Rickie Lee Jones (“So Long”), and even Miles Davis (“Carnival.”) Guitarist Buzz Feiten, meanwhile, had made a name for himself as a member of both the Paul Butterfield Blues Band – where he first linked up with Larsen – and as Gene Cornish’s replacement in the last several years of the Rascals.
In 1973, Larsen and Feiten – alongside several fellow Paul Butterfield Blues Band alums – formed the short-lived Full Moon (whose Larsen-penned instrumental “Midnight Pass” would later be covered by Sea Level on Cats on the Coast), but the two men would continue to work with each other, both playing on a lot of the same sessions and Feiten playing guitar behind Larsen on the latter man’s solo albums for the A&M jazz subsidiary Horizon, before forming a second band together. The newly-formed Larsen-Feiten band was rounded out by three more in-demand sessionmen: bassist Willie Weeks, percussionist Lenny Castro, and drummer Art Rodriguez.
The band’s sound was adult-contemporary-oriented with an obvious R&B influence, but the blues and jazz backgrounds of Larsen and Feiten meant that their sound had a bit more grit to it than, say, the Michael McDonald-era Doobie Brothers, and the band was more easily comparable to more jazz-fusion-inspired acts like Sea Level or Time Loves a Hero-era Little Feat, bands that still had their feet firmly planted in the world of R&B-influenced pop yet weren’t adverse to indulge their inner jazz musicians and embark on long instrumental jams. Not surprisingly, two of the eight cuts on Larsen-Feiten Band (produced by the legendary Tommy LiPuma, best known for his work with George Benson, Natalie Cole, and Diana Krall) are instrumentals, both Larsen-penned; “Further Notice” is the more jazz-oriented of the two, but the album-closing “Aztec Legend” is perhaps even more adventurous and intricate, boasting just a slight hint of prog, and the title of the latter fits the music quite well.
The percussive grooves of the slow-burning “Midnight Star” and the danceable “Make It” (which makes great use of the famed horn section from the jazz-pop outfit Seawind) make great use of the rhythmic sense of Castro and Rodriguez both, while the sunny and soulful “She’s Not in Love,” penned by Feiten with future ‘80s pop star Michael Sembello (“Maniac,” “Automatic Man”), boasts the disc’s most unforgettable chorus. Larsen’s slinky “Over” (penned with lyricist Allee Willis) vaguely recalls the great, overlooked early Toto single “Georgy Porgy” and has a sensational pre-chorus that in and of itself is enough to make you give the cut a second listen.
The disc’s most famous track, though, is the opener, “Who’ll Be the Fool Tonight,” which was released as a single and gave the band their first and only Top 40 hit, peaking at #29. The chorus isn’t nearly as catchy upon first listen as that of “She’s Not in Love,” but it’s easy to see why the track was still chosen as the lead-off single: it’s just got that winning sound to it. The five men ride the song’s R&B groove with an expert precision and smoothness that would make Michael McDonald envious, but it never quite sounds entirely like yacht-rock, either; imagine Al Jarreau’s “We’re in This Love Together” with a harder and more pronounced bop to it, with just a hint of the Doobies’ “Takin’ It to the Streets” thrown in for good measure, and you’ve got a good idea of the sound of the single. There’s pop there, to be sure, as well as elements of soul and smooth-jazz, but it’s played with an attitude that gives the cut just a hint of rock and makes it both surprisingly punchy and a bit too genre-defying to fit neatly into any one category.
For some reason, the Larsen-Feiten Band name was retired, and the same exact lineup would record one more album together, 1982’s Full Moon, under the name Full Moon featuring Neil Larsen & Buzz Feiten and featuring an equal mix of instrumentals and songs with vocals, but the album didn’t perform nearly as well as the previous outing. (Both this disc and Larsen-Feiten Band would eventually emerge on CD as a two-fer package in 2005 on the Wounded Bird label.) Nearly the entire band – with the sole exception of Weeks – would also show up on Rickie Lee Jones’ Pirates.
Larsen and Feiten would continue to make music together as sessionmen, the two men most notably serving as the keyboardist and guitarist, respectively, on Kenny Loggins’ iconic title theme for the film Footloose. Feiten would also temporarily return to band work in the late ‘80s as the replacement for Steve Farris in – fittingly enough – Mr. Mister.
by Jeff Fiedler, December 15, 2016 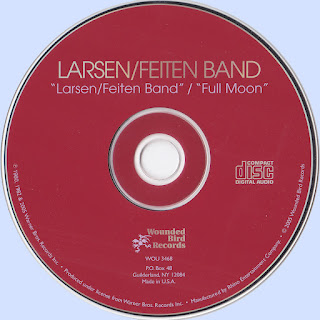