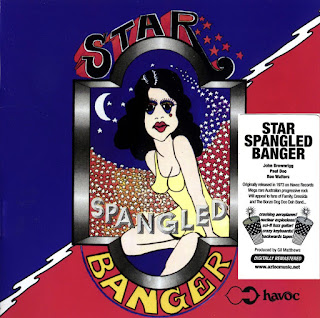 Star Spangled Banger was a short-lived studio project that resulted in a sole self-titled album and single on the Melbourne Havoc Records label in 1973. With Havoc closing soon after its release, the album was quickly deleted and, over the years, has grown in stature, becoming one of the rarest Australian records ever. This is a hugely enjoyable mix of English flavored progressive rock (Family, Cressida), reflective piano ballads, with a hint of Bonzo Dog Doo-Dah Band like lunacy. Principal songwriter John Brownrigg (vocals, guitar), Ron Walters (vocals, piano, organ) and drummer Paul Doo formed Star Spangled Banger in 1972 from the ashes of their former band The Sect.
Brownrigg originally hailed from Liverpool and had played in several bands during the Merseybeat boom of the early Sixties – as his own brick on the Cavern Club wall of fame attests. Signed to Havoc in late 1972, the band were put into the studio with engineer/producer (and soon to be Aztec) Gil Matthews.
Armed with a stack of sound effects records, the album was recorded at odd hours (in-between Matthew’s day-job at Havoc and his night-time one as new drummer for the Aztecs) and resulted in an eclectic mix of progressive rock, protest songs and ballads – with a healthy dose of humour (witness: “Fancy Underpants”!). Added to this mix are: explosions, backwards tapes, crazy keyboards, nuclear explosions, crashing aeroplanes and fuzzed out psych guitar. 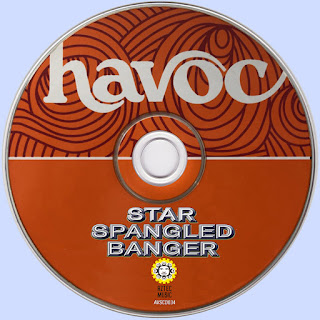