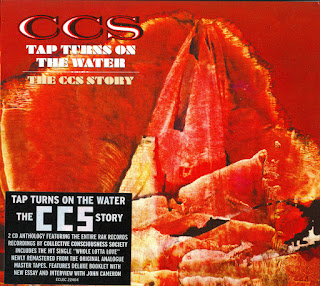 More frequently than ever, Esoteric has begun putting together anthology reissue packs that collect together full or partial albums, ranging from the cult band Cressida to the mercurial Beggar's Opera and right down to the downright obscure Burnin' Red Ivanhoe. In some cases, there is a lack of quality control, as Esoteric try to cram too much into one place, ruining the atmosphere of the standalone album as well as utterly wrecking the album artwork. However, this kind of treatment seems just right for the Collective Consciousness Society - ubiquitously abbreviated to CCS - the jazz-rock brainchild of Cambridge-bred composer John Cameron and fronted by the much older singer Alexis Korner, a pioneer of blues in Britain.

The albums and singles tend to slide into each other, and the artwork is hardly very important here, meaning that a cheap one-buy-gets-you-everything package is ideal. The double disc set includes all three of the band's albums, namely CCS (1970), CCS 2 (1972) and The Best Band in the Land (1973) and rounds up all the non-album tracks, presenting the collection in chronological order.

Now I shan't be spending too long on this group, as their output couldn't be very easily described as prog. Essentially a rock band with an extended brass section - including the talents of Henry Lowther among others - CCS specialised in playing jazz-rock covers of popular tunes such as Led Zeppelin's Whole Lotta Love. Indeed, CCS helped to shed more light on the fledgling Led Zep when their version of this song was used as the introduction to BBC's Top of the Pops. I still find it rather ironic that TotP used this song when they would never have a band like Led Zep on in the first place, but I digress. The band also cover Jethro Tull's Living in the Past quite creatively, although draw blanks with their rather muddled attempt at another Led Zep song, namely Black Dog.

However, original tunes permeate the tracklist, and the most notable (and perhaps enjoyable) track of the set is the band's top single, Tap Turns on the Water, which originally made it to #5 in the UK singles chart. Replete with daft yet cheerful lyrics - "Tap turns on the water, see the waters flow / Acorn makes a forest, watch the forest grow!" - and played in a tremendously major key, it may be the feel-good song of 1971.

Oddly, there's a lot of redundancy in the band's canon. For example, the main riff from Tap Turns on the Water can be heard yet again in CCS's cover of The Jackson 5's I Want You Back. Elsewhere, Living in the Past and Running Out of Sky (Sky Diver) seem too similar, especially in the rhythm department, to be treated as separate songs. Perhaps the biggest offender though is the aforementioned Whole Lotta Love, which unabashedly makes its way onto album 2 as part of a medley titled Whole Lotta Rock and Roll. In fact, this is another highlight of the set, with seamless segues into such classics as Lucille and Long Tall Sally.

CCS never appeared to be a particularly hard-working band, more a group of successful and well-established artists just playing some fun music. As a result, the proceedings are all very light, and errors are made along the way. This is the sort of music that would go down well at social gatherings when your pristine vinyl copy of Relayer might not be so deeply appreciated as background listening. You might even find yourself singing along!
by Basil Francis 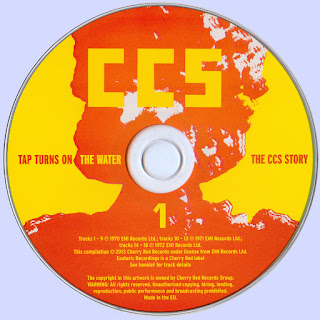 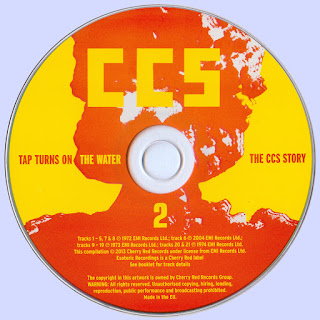