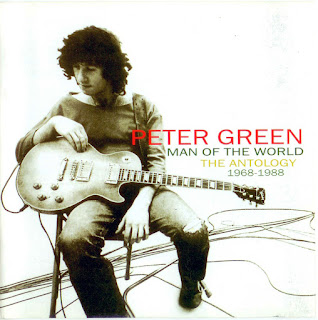 The sixties, as we all know, provided us with a slew of cult heroes whose reputations rest almost as much as them either shuffling off this mortal coil or succumbing to the pressures of fame and mislaying their marbles as their musical achievements. In the latter bracket we have names like Brian Wilson, Syd Barrett, Roky Erickson, Skip Spence and Peter Green. Green stands apart from the crowd. He wasn't a psychedelic voyager (though lysergic experimentation doubtlessly helped his decline). He was, first and foremost a bluesman, with the ability to replace Eric Clapton in John Mayall's Bluesbreakers.He was a fabulous singer and songwriter who was equally adept at adapting blues classics or conjuring new standards, seemingly, with ease. He's returned to something approaching form in recent years, but Man Of The World barely approaches the full story.
There's no getting around the fact that Sanctuary are pulling a little bit of a fast one with this anthology. The bulk of Green's studio work with Fleetwood Mac resides in the Columbia catalogue, leaving them to present us with alternative mixes, demos or live versions to represent the man in his prime. Luckily even offcuts and rarities from this period shine brighter than most artist's main output. While rougher versions of ''Green Manalishi'' (Green's most psychedelic hour and a true indicator of where his mind was headed) and the gorgeous ''Man Of The World'' just leave one hungering for the finished originals, live versions of ''Oh Well'', or ''Jumping At Shadows'' (taken from the legendary Boston Tea Party gig) are simply stunning in their power. The latter is demonstration in itself of Green's mastery of tone and attack with nothing more than a vintage Les Paul and a Marshall stack. His mastery of the blues guitar remains more emotive than any other of his generation.
Unfortunately following his debut solo album, The End Of The Game, and his retreat into psychological turmoil in 1971 he fell mainly silent. By 1980 he was coaxed back into the studio with several famous friends (Pete Bardens, Snowy White, Dave Mattacks etc) and produced several desultory albums that were but a pale shadow of his late 60s output. The bulk of this album comes from these. Add to this a couple of jokey, early extra-curriclar numbers from jams with Bob Brunning's Sunflower Blues Band.
by Chris Jones 2004 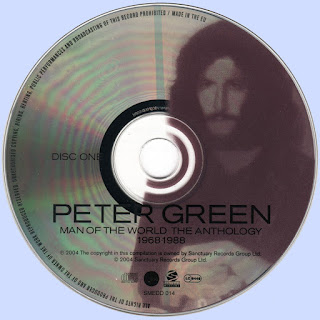 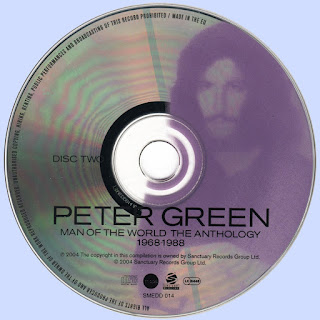