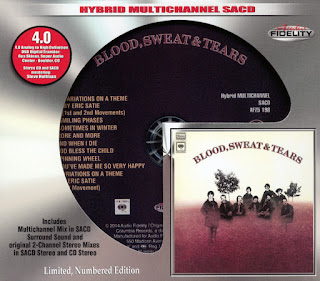 Blood, Sweat & Tears marked the debut of David Clayton-Thomas as the lead singer of the group Blood, Sweat & Tears. “In 1969, faced with both the departure of founding member Al Kooper and the pressure created by the critical acclaim their debut Child Is The Father To Man had garnered, Blood Sweat and Tears stood tall and delivered with their 1969 self-titled sophomore release. Welcoming vocalist David Clayton-Thomas aboard, the band advanced beyond its R&B / Blues Project origins to create what can only be described as a masterpiece, culminating in a Grammy that same year for Album Of The Year.”

Utilizing Erik Satie’s Variations On a Theme to quietly open and close the album, in-between they mixed songs from exciting, contemporary writers; Laura Nyro – “And When I Die” Traffic’s “Smiling Phases” and Barry Gordy – “You’ve Made Me So Very Happy”, with original material; “Spinning Wheel” and “Sometime In Winter”, creating virtually ‘greatest hits’ and concert staples with all. Engineered by legendary Columbia staffers Roy Halee and Fred Catero, the blend of jazz-pop arrangements with just a hint of classical, created a breakthrough recording that was constantly featured on radio for years.
High-Fidelity 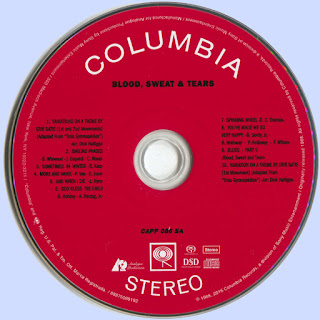 Free Text
Text Host
Posted by Marios at 5:06 AM 2 comments: