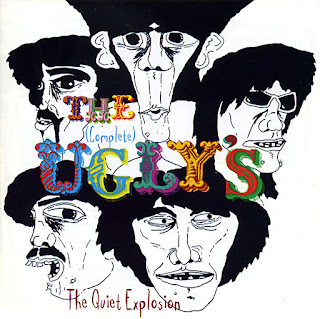 This great CD compilation collects together all the recordings from one of the most interesting Brum bands of the 1960s. The Uglys were a big part of the West Midlands live music scene with a line-up that included a long list of well-known local musicians. Despite recording a number of fine singles, the band never had the chart success deserving of the considerable talent existing within the group.

All of the band's original singles have been much in demand by collectors during recent years and apart from a handful of tracks appearing on various compilations, there has not been a collection dedicated to The Uglys until now. Along with the previously-released Ugly's records on this CD, Sanctuary Records included a dozen tracks never before issued which more than makes this compilation worth purchasing.

The CD package comes with extensive liner notes and band biography written by David Wells who chronicles the history of the Uglys from their first incarnation as "The Dominettes" in 1957 up to their evolution into "Balls"! by the end of the 1960s. David Wells interviewed original band members in order to write a definitive Uglys biography - not an easy task considering the number of different musicians who went through the line-up. Included also is a good selection of rare photos and memorabilia from various band members' own collections. The highly appropriate cover artwork and design were created by Rupert and Phil Smee.

The first 12 tracks on the Uglys CD are arranged in chronological order consisting of all their released 1960s singles (A-sides and B-sides). This starts with 'Wake Up My Mind' from 1965 which is probably one of their best known records outside of the U.K. Although not a hit in Britain, the song apparently reached the top chart position in Australia and New Zealand. It's probably one of the earliest socially aware pop songs by a British group - no doubt a result of vocalist Steve Gibbons' attraction to the music of Bob Dylan. The unique sound of the recording is achieved partly due to Steve's use of a king-sized harmonica. In contrast, the sparse instrumentation of the B-side 'Ugly Blues' gives the impression that the band used up their production budget on the A-side but it remains a lyrically amusing song nonetheless.

The next Uglys single 'It's Alright', features prominent use of the harpsichord (as played by the talented Jimmy O'Neil) but what stands out most to me in this recording is John Hustwayte's great bass playing which really adds power to this track. This record got plenty of airplay on the U.K. Pirate Radio stations - soon gaining the Ugly's an appearance on television's popular Ready Steady Go! and it seemed set for a high chart placing. Unfortunately, a strike by the record distributors prevented it from reaching the shops (I wonder if the Ready Steady Go! performance still survives on tape somewhere? - what a fantastic find it would be!). The singles' B-side entitled 'A Friend', is a faster paced and highly danceable track composed by guitarist Bob Burnett and Jimmy O'Neil.

'A Good Idea' from 1966, features a distinctive kazoo intro by Steve Gibbons, but it's really the B-side 'The Quiet Explosion' which is the stand-out track. The lyrically-gifted Steve Gibbons does nothing less than a brilliant job on this one with a socially aware verse and chorus even more relevant in 2004 than it was back in 1966! This record is powered along by Jim Holden's innovative drumming and John Hustwayte's echoey Dr. Who style bass riff. This, when coupled with Jimmy O'Neil's prominent organ, creates the most psychedelic-sounding track to be released by the band up to that point.

New Ugly's recruits Dave Pegg (bass) and former Brumbeats guitarist Roger Hill were present for the next single which was a cover of a Kinks record 'End Of The Season' as composed by the brilliant Ray Davies. This one marks a departure from the Ugly's previous records as up to this point they had been composed by the group themselves. Despite the addition of sound effects in the form of chirping woodland songbirds, this record missed out on a chart placing. The B-side however, is likely much more representive of the band's sound at that time as their recording of 'Can't Recall Her Name' has a distinctly "live" feel to it - certainly one of my favourites on this disc. Dave Pegg and Roger Hill left the Ugly's to form their own band called The Exception and Dave later joined the Ian Campbell Group before becoming a pivotal member of Fairport Convention.

1967 saw the arrival into the band of former Yamps/Traction guitarist Will Hammond. The new line-up recorded 'And The Squire Blew His Horn' which continued the Uglys tradition of including strange instruments on their records as it features Steve Gibbons' performance on a real hunting horn. This track has long been highly prized amongst collectors and when listening to the quirky lyrics and vocal backing it's not hard to see why. The song was apparently recorded as a joke by the group and not intended for release, but the record company thought otherwise. The B-side 'Real Good Girl' was far more representive of the band's sound. Guitarist, Will Hammond says it was a powerful number for the group to perform on-stage but they were told to tone it down for the recording session as the producer thought it was too loud!

The final Uglys record was 'I've Seen The Light' that was never officially released until now. The song is probably the band's heaviest number and was undoubtedly very powerful when performed live. The track was recorded by the final line-up of the Uglys consisting of Steve Gibbons (by this time the only remaining original member), Will Hammond on guitar, Dave Morgan (bass), former Lemon Tree drummer Keith Smart, and Richard Tandy (piano). Composed by the multi-talented Dave Morgan, I've Seen The Light was intended as the A-side of a proposed Uglys single in February of 1969.

Due to the band re-forming as Balls with the addition of the Move's Trevor Burton and ex-Moody Blues vocalist Denny Laine, I've Seen The Light was pressed as demo-copies only. It has since attained status as not only the rarest of all the Uglys singles, but for record collectors, THE rarest U.K. psychedelic single. One of the few copies known to exist belongs to Will Hammond and as the master tape is lost, the recording heard on this CD was re-mastered from Will's vinyl original.

The proposed B-side 'Mary Colinto' also composed by Dave Morgan and again recorded with the final Uglys line-up, is a much more straight-forward 'rocker' sounding like it could have been written for The Move. This was certainly a possibility as Dave's composition 'Something' featuring Carl Wayne, was selected for the B-side to the Move's chart topping Blackberry Way single in 1968. Mary Colinto features an especially fine performance by Keith Smart - certainly one of Birmingham's best drummers (he later joined Roy Wood as part of the Wizzard line-up).

All the remaining tracks on this CD are issued here for the first time. The first of these is a Steve Gibbons original titled 'This Is Your Mind Speaking' recorded as a demo for Carl Wayne's "Penny Music" publishing venture in 1968. This track will be of much interest to fans of The Move and ELO as it includes Carl on backing vocal and Trevor Burton on bass guitar/backing vocal as well as Dave Morgan and Richard Tandy both contributing on guitar. Two more Steve Gibbons compositions 'All That Glitters' and 'Speakly Weekly' feature the later line-up of the Uglys - only this time with original drummer Jim Holden instead of Keith Smart.

These, along with the other BBC tracks are probably the closest most of us will get to hearing what a 1968 Uglys performance sounded like. They are certainly performed with an exciting raw energy and some have an almost "garage punk" feel to them - especially 'Summertime Blues' to which Will Hammond delivers the kind of blistering guitar solo that Jimmy Page would make famous within the next couple of years. Another worthy cover by The Uglys was Arthur Lee's 'She Comes In Colours' as originally performed by Love.

The collection includes an alternate recording of 'Mary Colinto' - this time with lead vocal by the song's composer Dave Morgan. This version, though obviously a demo, sounds far more like The Move than the previous one - hardly surprising really when considering both Carl Wayne (vocal, tambourine) and Trevor Burton (bass guitar, vocal) also participated on this track. Note also Keith Smart's drumming which sounds more like Keith Moon on this recording. 'Ill Wind That Blows', also by Dave Morgan, is a real gem as it features some slide guitar as played by the Move's Roy Wood who also contributes some backing vocals to this plaintive composition.

The final listed track on the CD is Steve Gibbons 'Roses In The Rain' demo from 1967 which reportedly attracted the attention of no less than Graham Nash from The Hollies. A proposed new recording deal did not go as far as planned due to Nash's condition that The Uglys change their name to "Yellow Balloon" but fortunately the group, especially Steve Gibbons, decided against it. This final cut on the CD is shortly followed by a "hidden" track but I won't spoil the surprise by saying what it is!

In conclusion, The Complete Ugly's - The Quiet Explosion lives up to the high standards we have come to expect from the Sanctuary Records re-issues. Fans of The Uglys, Steve Gibbons, Fairport Convention, The Move or ELO will certainly be interested in getting this and the package makes a solid addition to the collection of anyone who collects Brum bands or 1960s U.K. psychedelic pop.
by John R Woodhouse, 2004 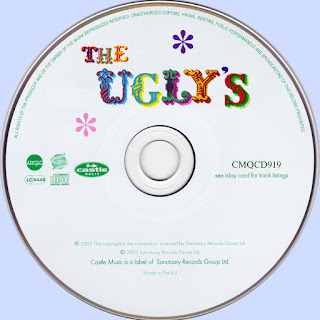 Free Text
Text Host
Posted by Marios at 4:08 AM 1 comment: