The Rising Storm - Calm Before... Alive Again At Andover (1967 us, classic garage psych) 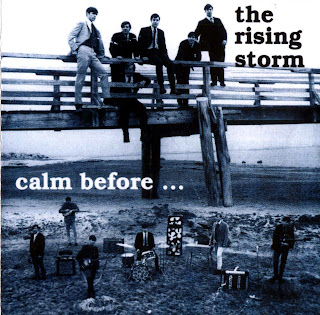 In the early to mid-'60s, thousands of teenage rock & roll bands bashing away in garages, rec rooms, and basements across America sought to document their music on self-released recordings, and the Rising Storm were no different, even if instead of a garage, they practiced in a dormitory at Phillips Academy, an upscale prep school in Andover, MA. The six members of the Rising Storm were all Phillips students, and in 1967, with the guys facing graduation, they went into a local recording studio for a few days and recorded an album, eager to preserve their music for their friends and classmates.

By the early '80s, the Rising Storm's self-released album, Calm Before..., had developed a potent reputation among record collectors, and mint-condition copies were trading hands for more than a thousand dollars each. Thankfully, the album is now available on CD, so no one needs to fork over a four-figure sum to hear it, but it is one garage rock collectable that happens to live up to its reputation. the Rising Storm were not the usual band of teenagers with bad attitudes covering "Louie, Louie"; roughly half of the songs on Calm Before... are originals, and they're surprisingly subtle and ambitious stuff, moody folk-rock that often suggests the subtle influence of the psychedelic revolution that was looming on the musical horizon.

If the Rising Storm weren't exactly virtuosos, they were a tight and energetic band with enough musical smarts to make the most of songs like "Frozen Laughter," "The Rain Falls Down," and "To L.N./Who Doesn't Know," and when they stomp down on "Big Boss Man," "Don't Look Back," or "Baby Please Don't Go," they sound mighty fine indeed. Arf Arf's CD reissue of Calm Before... includes 1982's Alive Again at Andover as a bonus, a live album recorded during a show the band played at (appropriately) a Phillips Academy class reunion.

Unfortunately, the band only plays one of its original tunes in the live show, but after the passage of 15 years the Rising Storm thankfully still sound like themselves, and it captures the spirit of the group's first era with commendable accuracy. Adventurous fans of '60s garage sounds will certainly want to own Calm Before..., and if Alive Again at Andover isn't as impressive, it's a fun listen and bookends this package nicely.
by Mark Deming 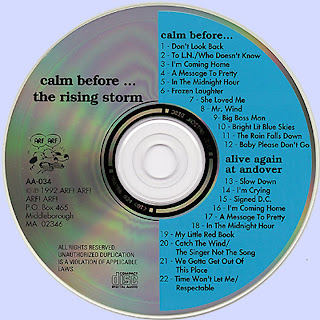