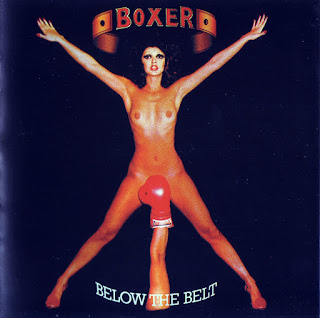 Keith and Mike were in Spooky Tooth together.  Mike left that band after a year and began working as a promotions man for Good Ear Records, owned by Mike's manager, Nigel Thomas.  Nigel would also become Boxer's manager and give them their name.  Ollie and Tony were playing together touring with Kevin Ayers, and when the touring stopped they got Mike to quit the record biz and form a new band.

This time the music Mike and Ollie brought to the table was straight-ahead rock that reflected little of their Patto past, except for possibly some of the songs on the unreleased Monkey's Bum album.

The band released it's first album, "Below The Belt", in 1975.  "All The Time In The World" was released as a single with a great non-LP B-side titled "Don't Wait".  They recorded a great second album called "Bloodletting" that would for some reason not be released until 1979.

Very little of the Boxer story seems to be documented, especially about the breakup of the original lineup.  Sometime in late 1976, Halsall is said to have quit the band.  But somehow Boxer's management ended up in possession of the band's equipment, including Ollie's guitars (as late as 1981, Ollie still didn't own an electric guitar of his own).  This is just hearsay, but the story is that the band was very deep in debt with Nigel Thomas, and he held on to all their equipment.  Then Nigel's company was liquidated, and Ollie's guitars were likely auctioned off by the official receivers.  Where is Ollie's white Gibson Custom SG now?

Mike put together a new lineup of the band to record one more Boxer album in 1977 called "Absolutely".  The new lineup band consisted of Mike, Chris Stainton on keyboards, Tim Bogert on bass/vocals, Adrian Fisher on guitar, and Eddie Tuduri on drums.  The album is not as raw and rocking as the first albums, but there are some fine moments of musicianship and songwriting on this album.  The Randy Newman-esque song "Everybody's A Star" was released as a single.  This album would be Mike's final release before passing away in 1979 with lymphatic leukemia (cancer of lymph glands).

They did some BBC sessions, and their tours, at least for the original lineup, were critically acclaimed.  Their first LP cover did get them some attention through controversy.  Many seem to remember their first album cover, even if they never did heard the contents.  But, as is typical of the Patto story, Boxer did not achieve a great deal of attention or success.

"Below The Belt" established that Boxer would be a straight-ahead rock band. Ollie and Mike were writing together again, but the new music did not hark back to the days of Patto (you may notice that "Shooting Star" has a chord progression that was also used in "Time To Die" on Patto's first album, though).

According to the host for the BBC session the band did prior to the album's release, it was originally going to be titled "Round 1" or "Round One".

Their first album was produced and engineered by Richard Digby-Smith, an engineer for Patto's "Hold Your Fire" and "Roll 'Em Smoke 'Em..." albums.  Overall, the production gives the band a good, full sound, but as with many bands, it's been said that the album  failed to capture their impressive live sound.

All of the band's members were great players, but showcasing of their soloing capabilities was kept to a minimum, which shows that Mike and Ollie were more focused on the songwriting than the extended guitar/keyboard solos that were typical of the early to mid-seventies.  In fact, the "All The Time In The World" single does not feature any soloing at all.

For the guitar fans, there is still plenty of great guitar from Ollie.  The slide work in "California Calling", the tasteful solo in "More Than Meets The Eye", the volume/echo bits in "Gonna Work Out Fine", and Ollie singing along with his guitar on "Save Me" are a few of the moments that come to mind

The album contains some great tunes.  "California Calling", "More Than Meets The Eye", "Waiting For A Miracle", and "Save Me" are my personal favorites.  "Waiting For A Miracle" is a great remake of Ollie's tune from the Tempest "Living In Fear" album (1974).  "Town Drunk" is a  slow, bluesy tune that features a great vocal from Mike -- it was written by Terry Stamp and Jim Avery for Terry's "Fatsticks" album (1975), on which both Ollie and Tony Newman played..

Unfortunately, the album cover received more attention than the music.  It featured a model named Stephanie Mariann.  The first pressings of the album had a full-frontal nude photo on the back cover, which caused the jacket to be banned.  The cover was redone covering her lower private bits with a Boxer logo.  The original uncensored covers are supposed to be quite rare.  Of course, in the United States, they wouldn't allow even her breasts to be shown, so they completely redid the cover using the band photo from the inside of the UK gatefold cover.
Patto-Fan 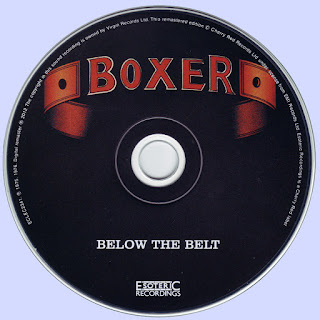