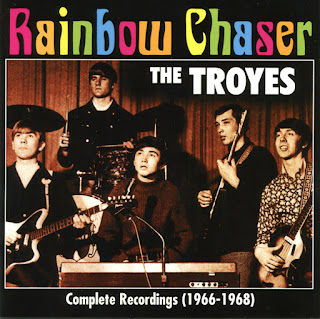 The inexplicably named Troyes were a short-lived, Battle Creek, Michigan-based garage band that was quite active locally in the mid-sixties, led by lead vocalist, songwriter and farfisa organist Lee Koteles along with four of his high school buddies. Performing an enervating mix of covers and originals at local teen hangouts and dance halls like Eddy’s and Teens Inc. they were soon signed to bandleader Ray Anthony’s just launched rock label, Space Records (a Capitol Records subsidiary), and scored a regional smash right out of the box with their rousing “Rainbow Chaser,” that rose to number three on the Top 40 in September of 1966—just ahead of the Four Tops with “Reach Out, I’ll Be There” and the Supremes with “You Can’t Hurry Love.” Anthony (of Peter Gunn and Dragnet-theme fame) had big plans for the combo and insisted they record enough material for an album—nearly two deck’s worth were recorded at Detroit’s United Sound studios in late 1966 and early 1967. But, unluckily, only two singles were ever issued, with the remainder in limbo.

This 24 track compilation contains them all—including three versions of “Rainbow” and two of its also catchy flip side, the moody ballad “Why.” The rest of the hook-laden efforts range from way-out psychedelia to totally manic fuzz and farfisa garage to irascibly haunting sonancy. Favorites, mostly in a downbeat romantic, Seeds-ian vein, encompass the likes of “Someday You’ll See My Side,” “I Know Different,” both sides of that second Space single (“Love Comes, Love Dies” and “Help Me Find Myself”) and the band’s final recording, an arresting commentary on their hometown, Battle Creek, where the Kellogg’s cereal corporation was headquartered. An enclosed booklet of rare photos, newspaper articles and Troyes ephemera rounds things out nicely. Well worth tracking down.
by Gary von Tersch 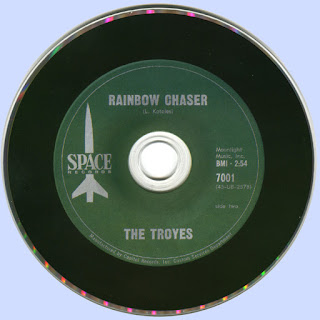 Free Text
Text Host
Posted by Marios at 7:35 AM 4 comments: