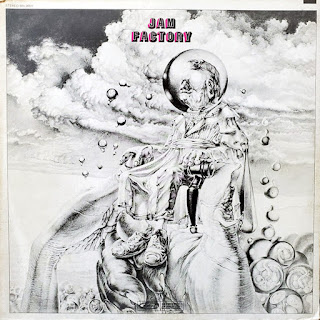 Jam Factory was an American band from Syracuse, NY active 1970-1972. introducing Jam Factory at the time to a national audience on The Today Show, replete with Joe English - later a drummer for Paul McCartney and Wings losing a stick, and Earl Ford and Gene McCormick initiating a vicious side-to-side head bobbing that would become the band’s trademark.
The mythology of the time had band manager, the late Joe Leonard, signing the contract while relaxing in a bathtub after Jam Factory had opened to a standing ovation when they appeared with Hot Tuna at the Fillmore East. Word was Columbia saw Jam Factory as a threat to the genre Sly and the Family Stone was establishing, and wanted to stash them away on the vinyl shelf.
With git-picker Mark Hoffman in "the fringe"!  Gracing the Hammond B-3 is Gene McCormick – so in the groove at the finale he nearly shakes his head off his shoulders. On the skins is Joe English who displays true matched-grip sensibilities - when he can hold on to his sticks! and awesome high vocal range. Not trying to miss the count Steve Marcone, on flugelhorn, vibes and trumpet and holding it all down is the late great Kent Defelice on bass.  The band played the Schaefer Music Festival in 1970. McCormick spent time as a band director and played with Marvin Gaye before moving into the mental health field. He is currently a chief clinician at Vermont’s Department of Corrections. 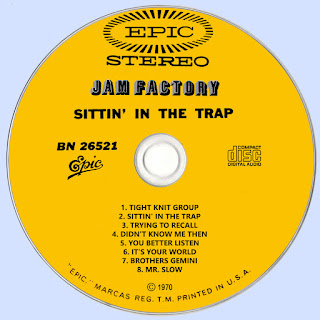