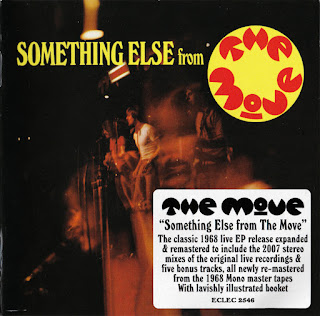 In February, 1968, Regal Zonophone Records decided to document the live performances of their artists, The Move, at one of London’s musical hot spots The Marquee Club.  Problems with the vocal levels of the recordings led to the scheduling of a second Marquee gig, in May, 1968.  Five tracks were subsequently selected for release on the 45 RPM mono EP “Something Else From The Move,” released in June, 1968, a quick follow up to their debut eponymous LP released two months earlier.  Esoteric Recordings’ compiler Mark Powell has combined the EP’s tunes with all twelve songs recorded at the Marquee gigs in stereo mixes, remastered in 2007 by Nick Robbins and Rob Keyloch at Sound Mastering Ltd., a total of 17 tracks, 56 minutes of high octane Mod rock.
In keeping with the times the set list of “Something Else” is a wonderful mix of Roy Wood originals and cover versions of hit songs of the day from bands such as Spooky Tooth, The Byrds, Love, Janis Joplin and Jackie Wilson among others.  The blend is perfect.  The inclusion of the EP’s five original tracks as “bonus material” is novel, but the opportunity to compare the stereo mixes with the EP’s original mono mixes, remastered by Ben Wiseman at Broadlake Studios, works wonderfully.  To make things even more interesting the personnel of The Move changed in between the recorded gigs, with bassist/vocalist Chris “Ace” Kefford exiting the band, making it a four piece with rhythm guitarist/vocalist Trevor Burton moving to bass forming The Move’s new rhythm section with drummer Bev Bevan.  Carl Wayne remained on lead vocals and Wood sang and played lead guitar in addition to being the band’s chief songwriter.
As for the music, the disc opens with snarling guitars and pounding drums of the short intro “Move Bolero” which segues into a cover of Jack Clement’s “It’ll Be Me” with Kefford’s thundering bass and Bevan’s pounding drums leading up to a wonderful guitar solo courtesy of Wood.  Wayne’s vocals are absolutely gorgeous.  Bevan and Kefford are absolutely locked in on this two and a half minute rocker.  “Too Much In Love” is a racing r and b number.  Gorgeous harmony vocals complement Wayne’s lead vocals as Wood’s guitar once again dominates.  The first album cut (from “Move”) featured is “Flowers In The Rain” with Wood’s fuzzed out guitar and Bevan’s  drums pushing the beat on this psychedelic pop classic.  Next up is another album cut “Fire Brigade” with its Beatlesque intro followed by the insistent drumming of Bevan and more incredible guitar by Wood.  The band covers Love’s “Stephanie Knows Who” with Wayne’s vocals mirroring those of Arthur Lee.
Roy Wood’s guitar is on display as he takes the listener on an incredible musical journey with his solo.  Covering a song by The Byrds is always risky business, but The Move simply tear up “So You Wanna Be A Rock And Roll Star” with Wayne’s vocals and Wood’s guitar dominating as usual.  Wood’s wah wah adds just the right amount of flavoring to this swirling, trippy piece of psychedelia.  The Everly Brothers wrote “The Price Of Love” but The Move make it their own with the deafening cacophony of Kefford and Bevan  giving way to Burton’s chunky rhythm and Wood’s understated lead guitar work.  Jerry Ragavoy and Bert Bern’s chestnut “Piece Of My Heart” was made famous by Janis Joplin with Big Brother but The Move do a more than adequate job of giving the tune their special touch.  Carl Wayne’s vocals may not be quite as guttural as Joplin’s but he sounds mighty good to my ears.  Jackie Wilson’s “(Your Love Keeps Lifting Me) Higher And Higher” may seem an odd choice, but the band again shows off its r and b roots, with Wayne’s vocals dominating until Wood’s guitar inevitably takes center stage.
The set closes with a cover of Spooky Tooth’s debut single, the Gary Wright penned “Sunshine Help Me”, the band showing off its vocal harmonies, moving easily through the classic tune.  Roy Wood proves he is up to the challenge of matching Luther Grosvenor’s guitar work on the original recording with his incredible lead guitar line and solo. The band stretches this one out in style.  Roy Wood even quotes “Strangers In The Night” in the midst of his fuzzed out jet fueled solo just for good measure.  The song is the perfect closer for a gig by The Move
.
The original “Something Else” consists of five of the tracks, all covers, selected to be mixed in mono.  Every performance is inspired and arguably comparable to the original recordings.  To put things in perspective, Roy Wood’s monster guitar solo on “Sunshine Help Me” should have been heard around the world on the then newly emerging FM radio format.  The applause that roars following each and every performance is well deserved as this is one of the best live documentations in rock annals.
“Something Else From The Move” is accompanied by a 16 page color booklet with an essay by reissue series compiler Mark Powell, complete track annotations and tons of groovy photos.  This release is symbolic of the entire reissue project of pre-EMI Harvest recordings by The Move and I cannot recommend it highly enough.  The original EP is a classic and this edition’s inclusion of the stereo mixes makes it the absolute last word in those regards.
by Kevin Rathert, July 16, 2016 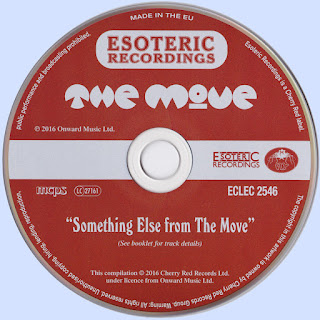