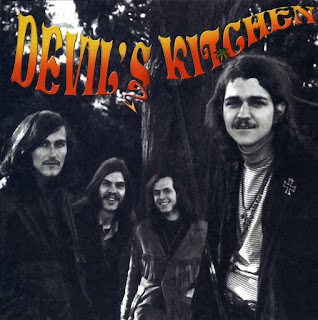 Devil's Kitchen Band was a four piece rock and roll band that lived and performed in San Francisco from the Spring of 1968 through the Summer of 1970.  We were the "house band" at Chet Helm's "Family Dog Ballroom on the Great Highway" opening for, and often jamming with, many of the most well known groups of the times.   We performed at all of the major West Coast venues from San Francisco's Fillmore West to L.A.'s Whisky A Go Go.

During the summer of 1970 while in the midst of a Midwest tour, the band fell apart when a series of gigs at colleges and universities was cancelled in response to the Kent State shootings.  Our last  big gig was Labor Day weekend 1970 at the Kickapoo Creek Rock Festival in Hayward, IL.

Everybody wants to know about the name: Devil's Kitchen... No we weren't a devil-worship-motorcycle-gang-heavy-metal-band...  That wasn't what we were called when we formed and for the first year or two we were playing.  We started out as "Om", the Hindu word/concept (click on the symbol to learn more about the meaning)... but when we got to San Francisco there were two or three other bands named that or some variation of spelling (most notably, AUM) playing in the Bay Area.  We had spent a couple months practicing at the lakeside vacation cabin of the family of our good friend and roadie, Rolf Olmsted.  We had fond memories of our time there and named the group after the lake - Devil's Kitchen Lake, an 810-acre lake about 8 miles from Carbondale (home of Southern Illinois University).

How did the band start?  The full version could be a very long story, but the short version is that Brett, Robbie, Bob, and Steve knew each other from playing in different groups.  Bob had been a driving force as the bassist in a local blues rock band called the Nite Owls (aka the Nickel Bag) and also played multiple instruments in various groups as part of the Folk Arts Society, perhaps most notably, the bluegrass group, the "Dusty Roads Boys".  Steve had been the standout drummer playing with a local psychedelic rock group, "Hearts of Darkness" where he picked up the nickname "Naz".  Robbie had gained notoriety as the exceptionally talented young lead guitarist and band leader in a series of local high school bands, most recently the "Viscounts".  Brett  played in various folk groups and was active singing and palying  in the Folk Arts Society, and was the band leader, vocalist and guitarist for a typical college party band, "Om", whose personnel changed from semester to semester.  One semester, they decided to re-form "Om" with the best players from the best local groups.

... parties, protests and teen clubs... Besides playing the usual campus parties and local teen clubs and campus gigs, we were the "house band" for a new teen club aka rock emporium in nearby Murphysboro called the Hippodrome.    Early song lists were mostly covers of Folk-rock, blues, Brit-rock and classic American rock and roll - "Purple Haze", "Sunshine of Your Love", "Rock Me Baby", "Mr. Fantasy", "I Can See For Miles", "Johnny B. Goode", etc... As we continued to perform, we started adding more and more original songs to our repertoire until we were ready to present sets of mainly original material.

Brett, who was from the Bay Area, had visited San Francisco for the "Summer of Love" the previous summer, worked with the Diggers, found a "Frame of Reference" and now wanted to take the band out there to live and play.  The band practiced intensely for a couple months and then hit the road - everybody and our equipment packed up in Brett's Blue VW bus.  The first time we only got as far as Freeport, IL before burning out the motor.  After getting a new motor, we set out again and drove cross-country to San Francisco...

...practice, practice, practice... When we got to San Francisco, we rented an old auto garage in the Mission District across the street from a pie factory and set up a practice space surrounded by improvised living space.  We played for anyone who would let us perform in front of an audience, getting several gigs in small local venues and doing benefits for the SF Mime troupe, etc.  (see the Photos/Posters for some of our earlier gigs) Eventually we started getting the occasional opening slot in local concert halls.

...sex, drugs, and rock & roll... not necessarily in that order... Yeah, we did the whole rock and roll band life style with all that involves, but it wasn't all just one big party... okay, yeah, it was...

After a while and with a growing coterie of roadies, girlfriends and just friends of the band passing through San Francisco, we needed a better living space and found a roach infested but huge 12-room apartment on the second floor of the building on the NE corner of Haight and Ashbury. Janis Joplin lived around the corner and down the block and we were close to Golden Gate Park and the weekend concerts where we played several times.  After the riots, we moved across the Panhandle to an old rooming house on Fell Street. We got more and more paying gigs all around the Bay Area, auditioned at the Fillmore where Bill Graham took an interest in us and helped us get more gigs and sent us into a studio to learn recording.

Eventually we hooked up with a new manager, Harvey Morrison, who knew the local music scene well and who moved us to an old rooming house on Fell Street across from the panhandle of Golden Gate Park.  He also introduced us to Chet Helms who was in the process of opening a new venue after the Avalon had been shut down.  We opened the Family Dog Ballroom with the Jefferson Airplane and the Amazing Charlatans, and played there on and off as sort of the "house band" for the next year and a half, frequentyly filling in for bands that canceled at the last minute for one reason or another...

We did one LA tour, playing the Golden Bear, the Brass Ring, the Corral, and the Whiskey a Go Go, where we opened for Savoy Brown.  Mostly though, we played Northern Califorenia and the Bay Area at places like the Matrix, Keystone Korner, the San Francisco Art Institute, Stinson Beach, Berkeley, Santa Cruz, Palo Alto, San Jose, Boulder Creek, Monterrey, etc. while living in the Fell St house.  One of our favorite gigs was a week playing every evening at a Ski Resort, Bear Valley... skiing all day, party all night...

During the summer of 1970 while in the midst of a Midwest tour, the band fell apart when a series of gigs at colleges and universities was cancelled in response to the Kent State shootings.  We had just played in Cincinnati at the legendary Ludlow Garage again and returned to Carbondale where we were performing at many of the local clubs.  First Steve left and we got an old friend, Randy Bradle, to join us on drums, and  then after our final gig at the Kickapoo Creek Rock Festival, Bob left, heading back to the West Coast with no intention of re-forming the band back in San Francisco.

For several months, Robbie and Brett continued to play as Devil's Kitchen in and around Carbondale as a trio with Robbie on guitar, Brett on bass and Randy on drums.  We also started jamming with some old friends who had a group called Coal Dust (Carla Peyton and Bob Pina).  Eventually, the two groups merged to become "Coal Kitchen".  Shortly after that, Brett dropped out of the group.  Robbie and Randy stayed with Coal Kitchen for a little while, but eventually Robbie, Randy and Bob Pina broke out to form another band, "Rolls Hardly".  Robbie later returned to the West Coast for a time where he performed with Mickey Hart and Robert Hunter on their solo albums and played bass for a time with the Quicksilver Messenger Service,.. and so it goes
Devils-Kitchen 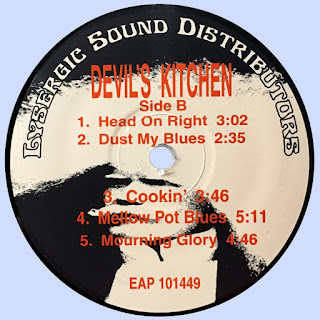