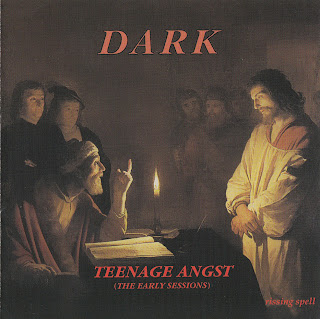 Dark are a bygone band from a bygone but very beloved era. Their psych-rock is represented here by eleven songs—by two different lineups—that predate their 1972 album Teenage Angst. The only common element is guitarist-vocalist Steve Giles. The first five tracks were recorded in 1971 by the trio of Giles, bassist Carl Bush, and drummer C. Thornycroft.
The last six tracks are from 1969, and probably sequenced this way due to the shabby quality of those recordings. The ’69 cuts were recorded by Giles and a different backup unit: organist Martin Moloney, bassist Bruce Duncan, and drummer Charlie Hiams.
“In The Sky,” “Wasting Your Time,” and “Could Have Sworn” are built upon loose “jammy” structures, fuzz-drenched guitar, and leaden basslines—a very familiar formula. “Maypole” kicks things up a notch with a melodic bass lead, plodding cadence and a cool wah~fuzz guitar solo.
The next pair of tunes (from 1969) rooted by Martin Moloney’s velvety organ tone. An earlier, version of the first half’s best song, “Maypole,” appears here with a slacker, undermixed guitar solo, and an obnoxious fadeout at the middle, akin to experiencing a space-time warp. Bowl haircuts whip themselves into a collective frenzy with the unproduced acid rock jam, “Bad Taste,” (also anointed with a theremin-charged ending).
“Grey Man” and “Cloud Of Unknowing” round out the set, and are barely listenable due to the lowest of production values, complete with dropouts, incomprehensible vocals, teetering signal limits, and all that nonsense. This kind of rawness is testament makes Dark an interesting piece of nostalgia.
by Elias Granillo 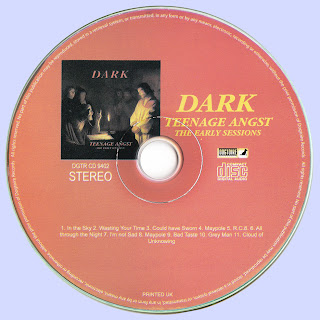