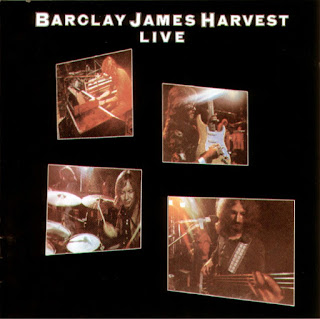 Having been dropped by Harvest due to poor record sales and spiralling costs (they insisted on touring with an orchestra) they signed with Polydor Records in January 1974. To support their latest album Everybody Is Everybody Else (a prog classic if ever there was one) a UK tour was set in motion with the Liverpool Stadium and London’s Theatre Royal shows earmarked for recording their first live album. The Liverpool gig was cancelled on the eleventh hour when the bands road crew discovered that the venues electrical system was in a potentially lethal state. The 30th June London gig on the other hand got off to a resounding start but sadly the performance was blighted by the less than trusty Mellotron which failed to co-operate during the show.

A rescheduled Liverpool Stadium performance went ahead on 31st August 1974 but the pressure was on to have the live album in the shops before Christmas. As a result Barclay James Harvest Live released in November 1974 was taken mainly from the London recordings with some minimal studio overdubs plus the occasional song from Liverpool to replace those that couldn’t be salvaged from the London tapes. Whilst several songs remain in the bands set list to this day, some like guitarist John Lees’ epic Summer Soldier (from their final Harvest album Baby James Harvest) were living on borrowed time. A pity because it provides a magisterial opening to the show and it’s also one of the songs that first attracted me to the band. Melody wise it’s reminiscent of the bands popular Hymn but more ambitious drawing on the symphonic grandeur of earlier classics like After The Day. The band is clearly on top form from the outset, especially the late Mel Pritchard who gives a powerhouse performance throughout. Only keyboardist Stuart ‘Woolly’ Wolstenholme’s ever present Mellotron lets the side down sounding a tad muddy despite the post production tinkering.

Summer Soldier segues into Medicine Man which is basically an excuse for the band to indulge in some rare and lengthy soloing. This includes some very Yes like moments especially Woolly’s manic synth break and Les Holroyd’s thunderous bass workout. Crazy City sounds as tuneful as ever and reveals Holroyd’s love of US west coat music including some neat harmonies in the vein of The Eagles. Following the obligatory band introductions from Wolstenholme they launch into After The Day where the keyboardist also provides the vocals. This song remains the bands crowning glory in my humble opinion although the slightly ragged sound here doesn’t match the quality of the version that can be found on 2007’s Legacy DVD. Lees’ guitar work however is as stirring as ever and there is also a sneaky reference to The Moody Blues’ Nights In White Satin.

The poignant The Great 1974 Mining Disaster is treated to a fine performance with superb harmonies from Lees and Holroyd and once again drummer Pritchard provides a master class in technique. A beautiful rendition of the exquisite Galadriel leads into the uncharacteristic (for BJH) sounding Negative Earth, a pleasant if not outstanding tune and probably the weakest from the then latest album despite the Pink Floydish coda. It’s no surprise that it quickly disappeared from the bands set list after this tour. She Said is more like it, taken from the bands second album it’s full of pomp and splendour with Lees’ rousing guitar solo going into overdrive. Paper Wings is another tuneful but fairly average song from Holroyd and even the lively instrumental break sounds a little contrived by BJH’s usual standards.

For No One is another standout song from Everybody Is Everybody Else with the memorable chorus providing the albums title. Lees’ soling over the backdrop of Mellotron strings is archetypal Barclay James Harvest. Unsurprisingly the bands signature tune Mockingbird provides the encore and as prog rock classics go this is the genuine article. Furthermore this is quite possibly the definitive version with a stunning performance from the band interlocking brilliantly during the instrumental section. Even the Melly behaved itself on this occasion sounding suitably grand.
by GeoffF Feakes 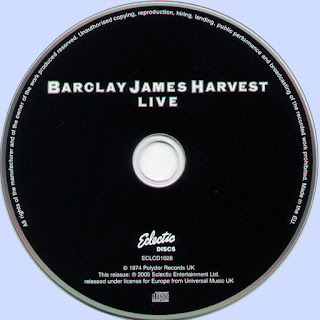 Free Text
the Free Text
Posted by Marios at 8:47 AM No comments: