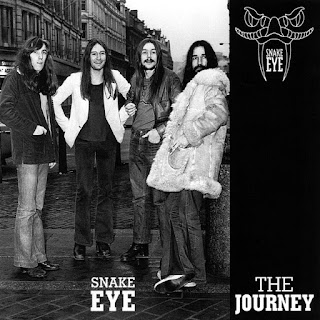 Having released a 1970 album and played a few shows, the band Red Dirt decided that a change of name was their passport to fame and fortune and promptly became Snake Eye, under which guise Manfred Mann described this outfit as "one of the best bands he had seen". Praise indeed and if you like Wishbone Ash, you might well have agreed, for while Snake Eye were put in the same pot as both King Crimson and The Allmans, it's hard to shake off the feeling that the opening track from which their only album, The Journey, takes its name isn't a long lost Ash track. It's a thought that runs through this entire album, the long instrumental sections of "Sweet Dream Lady" or "The Heart Of A Young Boy" utilising a similar structure. "World In A Mountain" does go some way to revealing the Crimson comparisons and yet it would have to be a watered down version of that band who would have come up with the dextrous, yet much more straight ahead themes set out here.

Strangely for an album where they are buried deep within lengthy twin guitar interplay and booming rhythms, the vocals from Dave Ritchie offer a dreamy change of mood that fits the music well. Although there's little doubt that it's the fret work of Ritchie and Ron Hales, and how that melds keenly with Ken Giles' bass, that is the key to what makes The Journey as engaging as it is. Drummer Steve Jackson holds up his end of the deal, eagerly adding emphasis and style as does Gary Boroughs who appears behind the kit on two tracks to Jackson's four. Although it's also Jackson who plays on two additional bonus cuts, "Tolly Cobold" and "Hoe Down", neither of which seem connected in any way to the main album, both being a strange and unconvincing folk rock hybrid that neither shows the band in a great light, or add anything to The Journey other than length.

The six main album cuts however are worth the price of entry alone, the easy mannered but pinpoint sharp and hugely memorable melodies this outfit were capable of weaving, really quite impressive. Personally I'd never heard of Snake Eye before this welcome Angel Air release, something explained by the fact that these recordings have never actually seen the light of day before. The debut Snake Eye album coming some 44 years too late for them to hit the big time. Which when you consider just how good their music was, is nothing short of a travesty. Fans of Wishbone Ash will lap up The Journey and wonder at what could have been for an undiscovered band that deserved so much more.
by Steven Reid 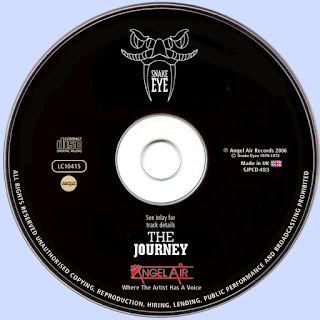 Free Text
Text Host
Posted by Marios at 7:37 AM 3 comments: