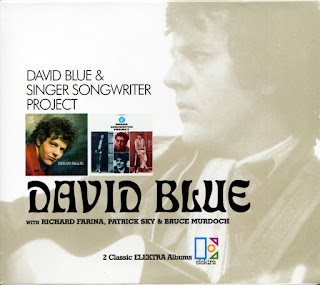 When David Blue came out in August 1966, folk-rock singer-songwriters with folk roots were scurrying to ride Bob Dylan's coattails into the rock mainstream. For David Blue, however, it was not enough to be influenced by Dylan, or even to emulate Dylan. David Blue, from all the sonic and even visual evidence on his Elektra debut album, wanted to be Bob Dylan.

If that seems like an extreme or rash conclusion to draw in an era that saw several "new Bob Dylans," it's justified by a listen to the end result. The surrealistic lyrics, the half-spoken half-sung vocal style, the interjection of atonal howls at the end of phrases, the basic blues-rock melodies on the hardest-rocking cuts, the rich electric keyboards and raw tremoloed electric guitars, the occasional love songs to mysterious, nebulous goddesses -- it's all there, albeit in a somewhat garage-band variation. There seems little doubt that the songs were largely the product of multiple listenings to Highway 61 Revisited - at their raunchiest and Blonde on Blonde - at their most tender. If it sometimes sounds as if you're listening to outtakes from those records, it really is no accident, as bassist Harvey Brooks and keyboardist Paul Harris played on various 1965 Dylan sessions. Drummer Herbie Lovelle, meanwhile, had played on Dylan's very first electric recordings in late 1962, which yielded the obscure "Mixed Up Confusion" single.

If he nonetheless hoped to avoid Dylan comparisons, Blue did himself absolutely no favors by putting a head shot on the cover that replicated Dylan's curly late-1965 haircut to a T. Blue's pose in 1965-66 vintage Dylan sunglasses on the back sleeve reinforced the sense of a Village hanger-on auditioning for a film role as Dylan's stunt double. You could also toss in how Blue, like Dylan, had changed his name from an obviously Jewish one - David Cohen.

Yet Blue was not some cat plucked off the street to mimic the Dylan sound as closely as possible, but an actual friend of Dylan, with similar roots in the folk circuit. The Rhode Island native had worked in the Cambridge folk scene as part of the Unicorn Jook Band, which also featured another future folk-rock singer-songwriter of note, Eric Andersen. In the early 1960s, he was one of many young folk singers scuffling around Greenwich Village alongside Bob Dylan. In the Village Voices television documentary, Blue claimed to have helped Dylan during the writing of "Blowin' in the Wind," not to the extent of contributing any music or words, but by playing chords that Dylan suggested as the composer worked out the lyrics.

Blue's association with Elektra actually began not with David Blue, but the earlier compilation album Singer Songwriter Project. For this LP, Elektra had four young songwriters -- Blue, Richard Fariña, Patrick Sky, and Bruce Murdoch -- contribute three or four songs apiece. Blue, under the name Dave Cohen, sang three average, old-timey-styled acoustic folk originals - none of which appeared on David Blue that were not especially indebted to Dylan, in either compositional or vocal style. The emulation became more egregious when Elektra went for an entire David Blue LP. By that time Dylan had gone electric, and Blue was part of the legendary in-crowd -- with Dylan as the centerpiece, but also including Phil Ochs, Eric Andersen, and Tom Paxton -- that traded verbal spars and barbs in Greenwich Village cafes.

Producing the album was Arthur Gorson, who managed and/or produced several other acts making the transition from folk to folk-rock in the mid-1960s, including Phil Ochs, Eric Andersen, Tom Rush, and Jim & Jean. Filling out the session musicians were guitarist Monte Dunn, who had played on Ian & Sylvia's Early Morning Rain album, and Buddy Salzman, who shared the drum chores with Lovelle. Several of the session men on David Blue, particularly Harris and Brooks, ended up playing on many early singer-songwriter folk-rock albums in the mid-1960s, which Gorson confesses was no accident: "At a time when we wanted to expand our audience base a bit and make slightly more commercial records, we wanted to use electric instruments in the studio. But we really didn't know much about it. We ended up using a very small group of musicians who perhaps played on a Dylan album or something like that."

If the songs on David Blue sometimes seemed like Dylan prototypes that had been thrown in the kitchen sink and tossed in the washing machine several times over, its stronger tracks were nevertheless quite enjoyable variations of their obvious model. "So Easy She Goes By," in addition to boasting the vibrating organ-piano blend that was so much a part of the sound Dylan innovated in the studio, was melodic enough to be a hit in the hands of a more conventional singer than Blue. "Midnight Through Morning" had the late-night romantic mood of several of Blonde on Blonde's more introspective numbers, pivoting around the arresting image of a would-be lover fantasizing about falling with a woman's hair as it tumbled down. "Grand Hotel," probably the album's best-known track, was also somewhat of a fetching son-of "Sad Eyed Lady of the Lowlands" creation, demonstrating conclusively that Blue was a better singer when he turned down the volume and turned up the yearning longing. Both it and another song from the album, "About My Love," were effectively covered on Jim & Jean's underrated 1966 folk-rock album Changes - which included yet another Blue composition, the outstanding "Strangers in a Strange Land," that somehow didn't make it onto David Blue.

"I guess that was the sound of the moment that he was looking for," shrugs Gorson when asked about the record's strong resemblance to mid-1960s Dylan. "It was a tough thing for [David], 'cause that's what he knew." It couldn't have been any easier when, according to Gorson, "Dylan would come to the studio and taunt David during the making of the album."

David Blue ended up being the only LP the singer recorded for Elektra. He went on to release half a dozen other albums over the next decade - one under the name David Cohen, never rising even to established cult status. Those records found him growing away from his Dylan fixation, yet, perversely, he's probably most remembered for David Blue, in which his Dylan fixation was second to none. Also achieving some small recognition as an actor - particularly for a brief part in Wim Wenders's An American Friend, he died on December 2, 1982, of a heart attack while jogging in Washington Square Park in Greenwich Village.
by Richie Unterberger 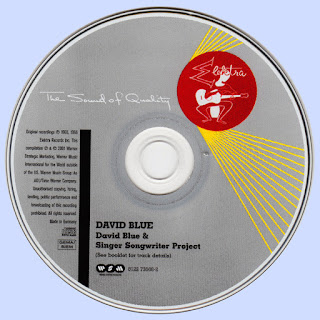