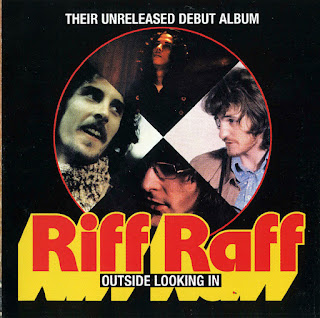 Riff Raff brings together four men of varying musical experiences whose sound spans both rock and modern jazz but cannot be pigeonholed in either camp.
Their music is their own; they write, arrange and produce themselves, and the result is music of today that succeeds in avoiding the self-indulgence of many of their contemporaries. They named themselves Riff Raff with tongues firmly in cheek, although the name serves to emphasize the individuality of each member of the band. All four musicians have known or known of each other for a couple of years or more: that goes double for bassist Roger Sutton and keyboard man Tommy Eyre, who both ended a two-year run with the Mark-Almond band during the Summer of 1972; guitarist Pete Kirtley is a Geordie last seen as an Alan Price sideman; and percussionist Aureo de Souza hails, as all good percussionists should, from Rio de Janeiro.
Tommy Eyre plays Fender Rhodes electric piano, organ, six- and 12-string guitar, concert and bass flute. He was classically trained on the piano from the age of three (an infant prodigy as they say), and should be best known as the keyboardist in Joe Cocker's original Grease Band (indeed he played on and arranged Joe's cover of "With A Little Help From My Friends"). Later joined Aynsley Dunbar's Retaliation (with Roger Sutton) with whom he made two albums. When Aynstey left to join Zappa, Tommy had a brief period with Juicy Lucy and then moved on to Mark-Almond. Roger Sutton's bass is a specially-made fretless Fender, to which he adds cello, double bass, and six- and twelve-string guitars. He has been a pro musician since he was 17, and played his first starring part as bassist for Brian Auger's Trinity in the days of Julie Driscoll: several Sutton numbers were recorded by Jools and the band. Next came Aynsley Dunbar's Blue Whale (with Tommy Eyre), Heavy Jelly, and in mid-1970 - Mark-Almond. Roger is one of Riff Raff's main sources of original material.
Riff Raff
The amalgam of jazz, rock, and soul was intoxicating and was a fine emotional alternative to the Canterbury bands, which were much more concerned with complexity than groove. The music included here features all seven of those original finished tracks as well as the first four recordings of the final band lineup after Marshall and Slade left. Guitarist Peter Kirtley and Brazilian drummer Aureo de Souza replaced them. Saxophonist Bud Beadle later joined the band as well.
This is a heady, seductive brew of energetic, soulful jazz-rock -- recorded after fusion but more a real amalgam than a completely new genre of music like that of the Mahavishnu Orchestra or Miles Davis' experiments of the time. Individual tunes don't so much matter, as the album is sequenced almost as a series of segues. The interplay among soloists here and the sheer musicality separate this band from virtually everyone else on the scene at the time, with the possible exception of their former employers. This is for collectors to be sure, but it is nonetheless revelatory music and should be sought out by anyone interested in anything other than Top 40 from the era.
by Thom Jurek 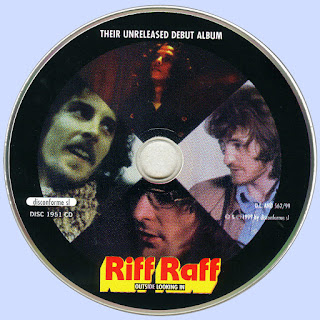