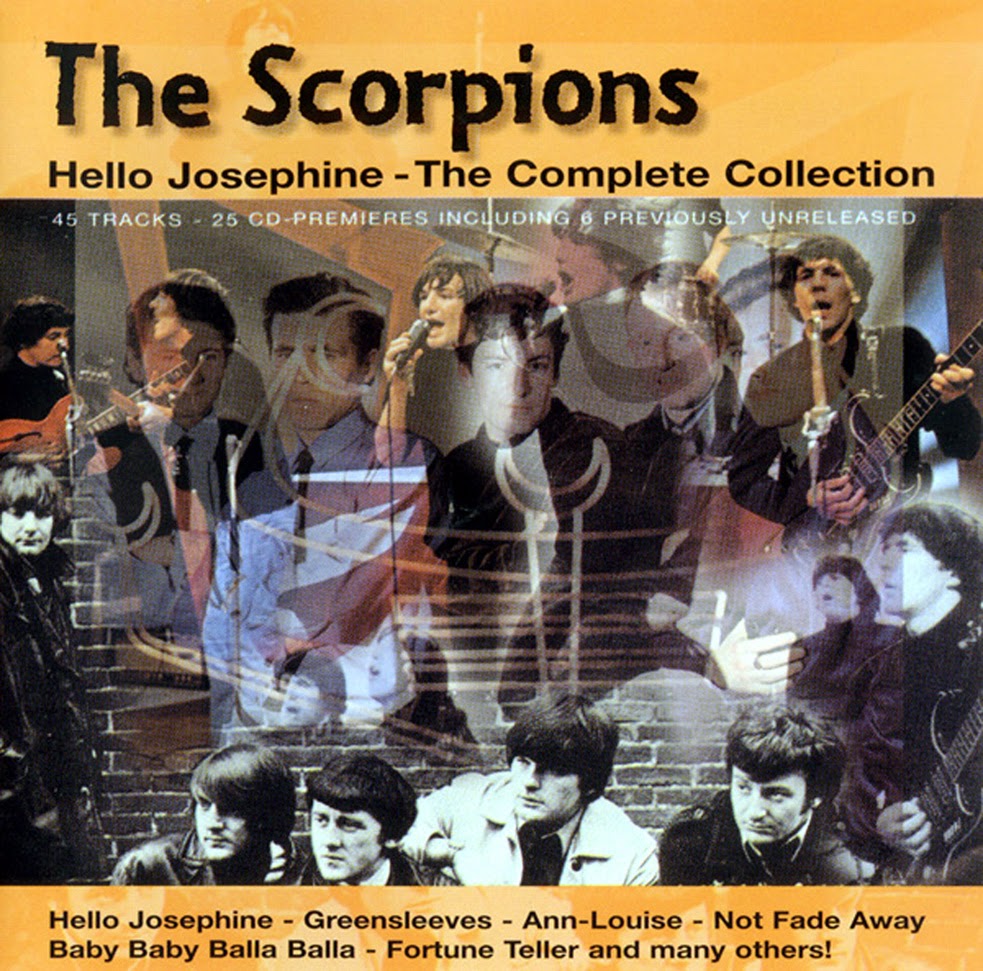 The Scorpions were aiming for a recording deal, but at the height of the British ’Beat Boom’ the competition between groups was very stiff indeed. They reportedly played at the famous Cavern club in Liverpool, but a record contract seemed elusive.

Whereas other British groups often went to Hamburg, Germany to get gigs and eventually achieve success, The Scorpions decided to try their luck in Holland in July 1964. It was still ’early days’ for Dutch beat music, and there was plenty of work to be found in Holland.

The Scorpions got signed by Dutch promoter Jan Vis to play the lucrative dance hall circuit around the country from their new base in Den Bosch. The record companies in Holland were also starting to take notice, and The Scorpions were quickly signed by CNR, who brought in Addy Kleyngeld to produce their first recordings.

Their debut single was released in August 1964. It was a cover of Chuck Berry’s ”Bye Bye Johnny” with ”Rip It Up” on the flip, but made no immediate impact on the record buying public. Yet the group stuck with their classic rock and roll style on a trio of follow-up singles released in October-November. Their renditions of Richie Barret’s ”Some Other Guy”, the Ray Charles hit ”What ’d I Say”, and another Chuck Berry number, ”Johnny B. Goode”, were all very representative of the group’s energy packed live performances at the time.

The group also showed a softer side with a decent version of ”Just One Look”, though without the close harmonies of The Hollies’ hit version. However, in spite of being given massive airplay by Radio Veronica and Radio Noordzee, The Scorpions’ first four singles all failed to register in the charts.

In late 1964 bassist Tony Briley left the group. Rodney Postill then took over on bass, Tony Postill switched from lead to rhythm guitar, and Terry Morton (full name:Terence James Morton) came in as new lead guitarist. He had previously played with Wayne Fontana & The Jets and The Country Gentlemen.

Their next choice for a single, released in December 1964, was Fats Domino’s ”Hello Josephine”, which had previously been covered by fellow Mancunians Wayne Fontana and The Mindbendersin 1963.

And with ”Hello Josephine” The Scorpions finally got their breakthrough as a recording act in Holland. The single entered Radio Veronica’s Top 40 on February 20th. 1965 and stayed in the charts for an impressive 33 weeks, 13 of which in the top 10 and peaking at the No. 2 spot.

The boys from Manchester were now big stars in Holland. It seemed almost impossible to follow up the enormous success of ”Hello Josephine”. Their next offering on single, ”Ann Louise”, was quite a contrast to previous releases. It was a much softer beat ballad with a pretty melody, but only reached a modest No. 36 in May 1965 and stayed for 2 weeks only in the charts. An album with the obvious title of ”Hello Josephine” was also released by CNR that same month to cash in on the group’s chart success. This contained all the group’s singles, A- and B-sides, and was released in CNR’s ”Hartewens” series.

The Scorpions underwent a new line-up change in early 1965 when drummer Mike Delaney quit and was replaced by Ian ”Skins” Lucas, who had previously played with Wayne Fontana & The Jets.  The success of ”Hello Josephine” secured consistent bookings for the group, but they also found time to start recording a new album, again with Addy Kleyngeld behind the controls.

One of the tracks laid down on tape for the album was ”Greensleeves”. This was picked as their next single, coupled with ”Hey Honey”, a number penned by the group. Released in June 1965, The Scorpions’ version of ”Greensleeves” was undoubtedly an attempt at copying The Country Gentlemen’s 1963 version of the song (UK Decca F.11766). But even though Terry Morton had a past in The Country Gents, The Scorpions didn’t quite manage to capture the raw and gutsy, powerful sound of Peter Cowap’s band.

1965 also saw The Lords from Germany do a cover of ”Greensleeves” (German EMI/Columbia C 23132). Their version also owed a lot to The Country Gents’ earlier recording. Nevertheless, The Scorpions scored their third consecutive hit in Holland with ”Greensleeves”. As from July 24th. 1965 it had a 5-week run in the Top 40 chart, with No. 22 as highest position.

Things now looked really bright for the group in Holland, but then at the peak of their success, their work permits expired, and they had to return home to Manchester. This seemed to be a crushing blow for the group as three members quit – Tony Postill, Rodney Postill and Terry Morton.

But remaining members Peter Lewis and drummer Ian Lucas refused to give up the group. They got in Graham Lee (real name: Graham Caunce, he also used the name ’Leeman’ in the 60’s) on lead guitar/vocals. He had previously played with another Manchester band called The Chancellors. Bass duties were assigned to Dave Vernon, and Roy Smithson came in on organ/vocals. The ’new-look’ Scorpions rehearsed intently in their home town before returning to Holland in September 1965, this time to a town called Bergen. They appeared on the ’Tiener Top Show’ in Den Haag on September 12th. alongside a then newly formed Dutch band called Golden Earring.

They also completed the recording of the group’s second album ”Climbing The Charts”, which as a whole was leaning more towards R&B and a general ’Beat’ sound than the first one, which had been dominated by re-makes of old rock ’n’ roll numbers. The album was released by CNR in October 1965.

A new single taken from the album, recorded by the previous Scorpions line-up, was released by CNR that same month. This combined a good cover of the Ray Davies written ”So Mystifying” with B-side ”Hey Little Girl”, but couldn’t repeat the chart success for the group. In November, however, they appeared in a show called the ’Grand Gala Du Disque” alongside Lucille Starr, Unit 4+2, Wayne Fontana and The Everly Brothers – a proud moment for The Scorpions, still remembered with fondness by Graham Lee. Seven years later, in 1972, when The Everly Brothers did a tour of the UK, Lee met up with Don and Phil backstage at the Batley Variety Club in West Yorkshire. He then also got the opportunity to say hello to Ike and Margaret Everly, who were travelling with their sons on that tour.

November 1965 saw the release of ”Baby Baby Balla Balla” as a new single, with ”I’ve Got My Mojo Working” on the flip. This gave The Scorpions their fourth chart hit in Holland. ”Baby Baby Balla Balla” peaked at No. 17 and stayed in the charts for 13 weeks, reportedly helped to some extent by the sales figures of versions of the same song by Chubby Checker & The Maskers and The Sorrows being added to the total.

Work permits in Holland expired again in early 1966, and the Scorpions went back to Manchester. Ian Lucas then left to join a Dutch band called Marks. He was replaced by Tommy Unthank, an old friend of Graham Lee’s from The Chancellors. A tour of Denmark and Spain has been mentioned in various articles about the band, but according to Lee the group never played there. They did some gigs in Belgium and Germany, but Holland was definitely their ”home away from home”, and in mid 1966 they got a new base at ’Hotel Benelux’ in Wernhout. The owner, Jan Hesseling, became their new manager.
by Winnie Biesheuvel 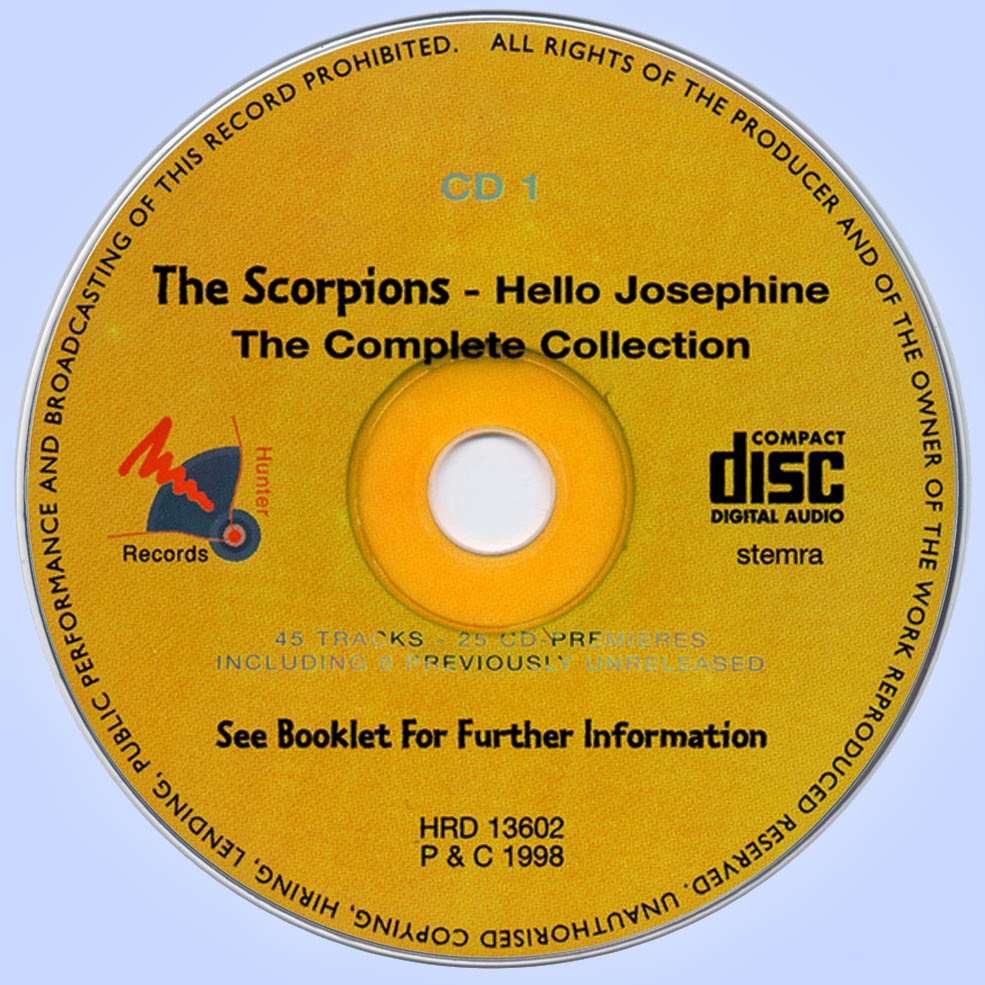 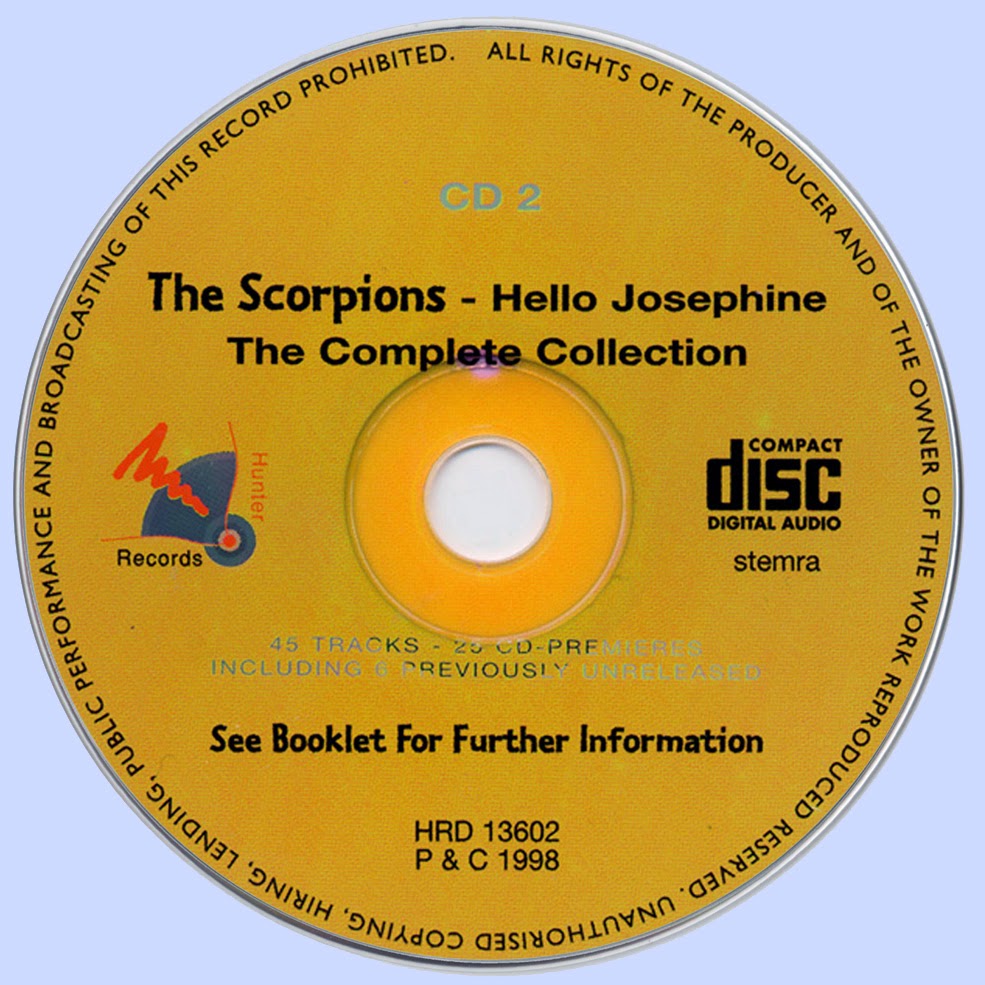