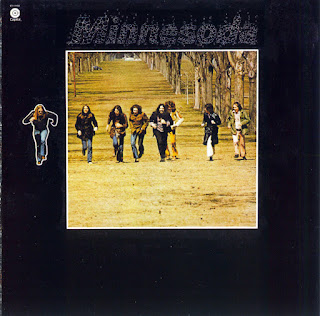 Minnesoda did an obscure but fairly interesting self-titled jazz-rock album for Capitol in 1972, produced by Bob Johnston (famous for his work with Bob Dylan, Johnny Cash, Leonard Cohen, Simon & Garfunkel, and numerous others). The record was in limited respects like the first recordings of Chicago and, more distantly, Blood, Sweat & Tears in its jazz-rock-with-vocals format. Minnesoda, however, had a substantially greater funk flavor, and a speedier, more aggressive edge to their material, though they didn't have the pop-friendly melodies of the more renowned bands. Half of Minnesoda's eight members were on horns, with tenor saxophonist Dave Gustafson playing flute as well, adding to the rock band-as-big-band feel.
A couple of the musicians in Minnesoda had performed with name acts prior to the album. Trombonist Don Lehnhoff had played with Mitch Ryder and the Detroit Wheels. Much more unexpectedly, trumpeter Eddie Shaw had in the 1960s been the bassist for the Monks, the 1960s band of ex-GIs who recorded an album of ludicrously minimalist, furious pre-punk in Germany in the mid-1960s -- a record that was unknown by 1972, but which by the 1990s had an avid cult following.
Minnesoda were at first called Copperhead, but without the band's knowledge, they were renamed Minnesoda (in a nod to their Minnesota origins) for the Capitol album. (They were no relation to another band called Copperhead, including ex-Quicksilver Messenger Service guitarist John Cipollina, that also recorded in the early 1970s.)
Minnesoda's little-known self-titled LP is pretty hot white funk jazz-rock, sounding a little like Chicago or Blood, Sweat & Tears might have had those stars decided to go less commercial rather than more commercial after their first albums. Actually, Minnesoda are rawer and more frenetic than Chicago or BS&T were even at their earthiest, though their material lacks the pop hooks of even the boldest Chicago/BS&T outings. A quartet of brassmen on tenor sax, flute, trumpet, and trombone augment the usual rock lineup in this octet, fronted by John Elms' credibly high-octane, lusty upper-register blue-eyed soul vocals.
There's sometimes an almost big band-like dexterity to the horns, yet the more jagged, at times hyper, thrust of the guitars and drums give it a solid funk base. The melodies are often more ominous than they usually are in this kind of fare, frequently jetting off into unexpected, improvised-sounding horn interjections and key changes. Only the adventure film theme-like "Flexible Flyer," and the uncharacteristically reflective, jazzy ballad "Party" slow the tempo down much.
Johnston recorded a second album with the band that went a little further into jazz, and further away from any rough similarities with Chicago, although they were still present. But Johnston was unable to get the album released, and Minnesoda remained their only issued LP.
by Richie Unterberger 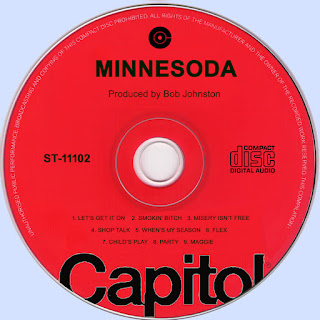