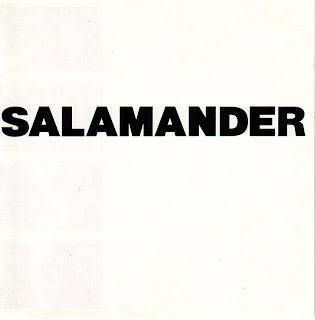 This progressive album made against the background 10 commandments. English recorded only this one album, referring to the achievements of The Moody Blues (from the period of Days Of Future Passed) - a fairly mild prog-rock variety, based on the sound of organs Hammond,guitar and brass enriched orchestrations.

This is a band whose concept album is based on the Ten Commandments. Each track deals with a different commandment. The album, which was produced by Miki Dallon, was dominated by Bob Leaper's orchestral arrangements, but there are also some good melodies, strong vocals and organ work and powerful drumming. The best tracks are those where the orchestral arrangements are more discreet: "He Is My God", on which the melody sounds like King Crimson in places; "Images", which features strong vocals, good drumming and organ work; the mellow and melodic "People" and "False Witness", a good progressive piece with some fine guitar leads and powerful organ.

Salamander's "Ten Commandments" is a most interesting album. Produced in 1971 (but released on CD by The Laser's Edge and Progressive Line), it has all the markings of a post-60's progressive release. Its sound is heavy on the Hammond organ and the album is fully orchestrated. Ken Golden from The Laser's Edge compares the organist to Jon Lord which is not accurate, as Alister Benson lacks the technique of Lord. I would compare Salamander more directly to Rare Bird's sound, with the addition of orchestration. The lyrics are at times direct, and at times vague. (Should we get philosophical on the issue of adultery? The Bible is clear on this topic.) However, it is well worth a listen if you like this early 70's type of sound.

Prelude Incorp. He Is My God' - This is a very impressive and memorable opener which starts appropriately enough with a devotional chapel organ before leading into the main theme arranged for full orchestra and overlaid with an exotic 'quivering' guitar lead.

'Images' - Nice Leslie speaker 'siren' effects on this and more than a trace of 'Hush' by Deep Purple in the rhythm employed but not overtly derivative as the tune is truly memorable and original. Titley displays what a wide range of vocal timbres he has command of with a rasping blues inflection (or is it someone else singing and the reviewer is too dumb to refer to the sleeve notes ?) One of those nice 'false ending' devices is exploited towards the end to good effect.

'People' - Although the production is horribly dated, that has never been an obstacle to a strong melody and sympathetic harmonic support eg the Beatles 'Yesterday' would still be a damn fine song even if rendered by a flat footed Bolivian nostril flute marching band. (think I'm drinking too much coffee) This is beautiful (Full stop)

'God's Day' - Things take a downward turn here with a paean to the Sabbath that sounds just a bit too cheerful for its own good. The melody is decent and well sung but is spoiled by some 'Trumpton Fire Brigade Brass Band' horn writing.

'Honour Thy Father and Thy Mother' - Simple and brief instrumental modest in its scope that carries an echo of Leo Sayer's 'When I Need You' (hardly an unqualified endorsement certainly, but so much of what we remember we profess to dismiss, without acknowledging its durability)

'Kill' - Reference points might include the organ sound and feel of Bob Dylan and the Band plus the arrangements of Van Dyke Parks heard on the more credible work by Brian Wilson. Unfortunately a good song is rather undermined by the adolescent 'gravitas' of a spoken narrative that drags us down into the twee realms of a school production of 'Joseph and the less than Amazing Monochrome Dreamcoat'.

'Thou Shalt Not Commit Adultery' - If Giles, Giles & Fripp had been god fearing souls with a better grasp of pop songcraft, they may have delivered something like this. Beautiful flute weaves its way throughout a finely woven tapestry of harmonized strands of melody. Brilliantly sung and enhanced by some restrained strings and subtle hand drum percussion. The best hippy camp fire song ever written to put out the flames of passion.

'Steal' - Bit of a no brainer in the moral lexicon really ? but an exquisite Hammond sound and a nagging riff that lives long in the memory afterwards. This may be the best song on the album as the electric band and the orchestral instruments are perfectly balanced with the latter injecting a thrilling little strings glissando at periodic intervals. Great tune and topped off with Benson's Vincent Crane impersonation on an economical solo which is interrupted by a startlingly ethereal strings dissonance. Very spooky.

'False Witness' - These guys were obviously big fans of 'The Crazy World of Arthur Brown' and early 'Deep Purple' as this has that sort of vibe but it fails to really go anywhere after a promising start. Ultimately it serves as a vehicle for an excellent short guitar solo from Titley, who otherwise contents himself with brushing up on a very convincing Dave Davies of the Kinks impersonation.

'Possessions' - Flecks of 'Cream' are visible on a decent tune but the specter of our old unvanquished foe 'James Last' hovers like a white bearded bird of prey over the arrangement.
by Adamus67 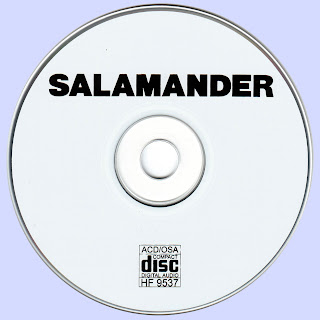 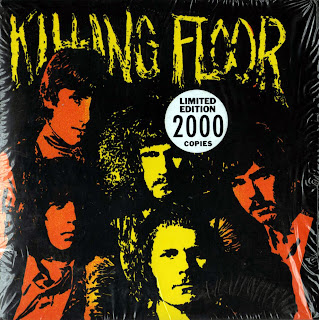 Killing Floor came together in 1968 when singer Bill Thorndycraft and guitarist Mick Clarke met up in a South London blues band. After one unsatisfactory gig with the band the two decided to form a new unit together..Bill suggested the name Killing Floor.

The band rehearsed hard in various South London pubs and rehearsal rooms, learning a repertoire of Chicago blues standards, but adding their own rock influences. Their first live performance was at London's "Middle Earth" with Captain Beefheart, and soon the band was playing at all the blues clubs of the time, including appearances at London's Marquee club with The Nice and Yes. Favourite venues included the Blues Loft in High Wycombe where they literally brought the house down..the footstomping of the crowd bringing down the ceiling in the room below!

The first album was released in 1969 on the Spark Label, a subsidiary of the Southern Music publishing group, and licensed in the USA by Sire Records. It got good reviews and airplay, and the band played sessions for John Peel, Johnny Walker, Alexis Korner and other national radio shows.

The band was very much a part of the developing "blues boom" of the '60's which created many great bands. Free's Paul Kossof and Simon Kirke jammed with the band while waiting for their own tour to begin, and Robert Plant witnessed their version of "You Need Love" sometime before Zeppelin's "Whole Lotta Love" was recorded. The band played concerts with Jethro Tull, Ten Years After and many other names of the time.

In May 1969 the band was offered the chance of backing Texas blues legend Freddie King on his next U.K. tour. The package toured for three weeks, including concerts with Howlin' Wolf and Otis Spann. A further tour with Freddie followed a few weeks later, and a third tour was only called off after Freddie failed to receive his advance payment from the tour promoter. The band also backed up Arthur "Big Boy" Crudup, the writer of some of Elvis Presley's early hits.

Towards the end of 1969 the frustrations of the music business proved too much and the band split, with various members finding new projects to follow. But after a while a four-piece Killing Floor came together again. Blues music at this time, having been the "in" thing for the last year was now moving out of fashion, and it was hard for Killing Floor to find work in the U.K. The answer was to go abroad, with frequent trips to Germany and Switzerland. 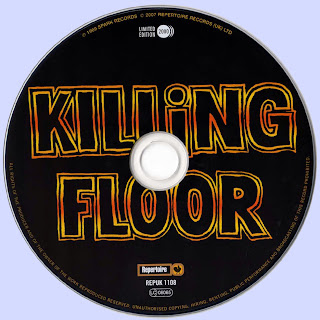 Free Text
the Free Text
Posted by Marios at 5:31 AM 4 comments: