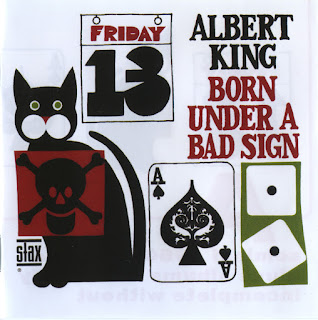 The familiar cover artwork to Albert King’s 1967 Stax album Born Under a Bad Sign hardly gives any indication as to its heavy contents.  A calendar reading Friday the 13th, the Ace of Spades, snake eyes on the dice, and an almost-cute black cat (!) adorned with a skull and crossbones all reinforce the title of the album but offer precious little hint as to the smoking electric blues within the sleeve.  Following 2012’s reissue of King’s 1972 Stax album I’ll Play the Blues for You, Concord Music Group has turned its attention to Born Under a Bad Sign, delivering another handsomely-expanded edition.
Born Under a Bad Sign, King’s first long-player for the Memphis label, is one of the watershed albums in the development of electric blues; backed by Stax house band Booker T and the MG’s as well as the Memphis Horns and Isaac Hayes on piano, King’s soulful tones blurred the lines between R&B and the new “rock” (sans the “and roll”).  The debt to Albert King has been recognized by such icons as Jimi Hendrix, Stevie Ray Vaughan and Eric Clapton, and indeed, the influence of his music on those players and others is readily apparent when revisiting the eleven tracks that formed the LP.  (Some of these tracks had actually appeared in single edits before being compiled as part of the full-length album.)
Booker T. Jones and William Bell tailor-made “Born Under a Bad Sign” specifically for King, though it later charted for Eric Clapton, Jack Bruce and Ginger Baker in Cream and was also recorded by the illustrious likes of Hendrix and The Paul Butterfield Blues Band.  Hendrix sat up and took notice of King, not only of his tough guitar licks but his cool vocal delivery.  King nonchalantly confesses on the title cut, “I’ve been down since I begin to crawl…if it wasn’t for bad luck, I wouldn’t have no luck at all!”  At one point, he quickly adds, “That ain’t no lie,” as if we could ever doubt his verisimilitude.  Each element of the recording, from King’s forceful guitar to Donald “Duck” Dunn’s rootsy bass, The Memphis Horns’ sneering accents, Al Jackson’s assured drums and Cropper’s own complementary picking, fall into place.  The magic recurs on the greasy “Oh, Pretty Woman,” not the Roy Orbison song, but an A.C. Williams composition.  As on the title track, King enjoys a little yelp or two as he tears into its bluesy foundation.
King effortlessly brings his distinct guitar voice to “Crosscut Saw,” introduced in 1941 by Tommy McClennan, introduces an Afro-Cuban rhythm to the blues standard, and injects Leiber and Stoller’s “Kansas City” with a sense of swing.  The Memphis Horns have ample opportunity to shine on tracks such as King’s own, funky “Down Don’t Bother Me” but it’s always his piercing, controlled blasts of metallic guitar that carry each song.  A group composition by King and the MG’s, “The Hunter” is a bit of sly, rock-ish fun in which the singer boldly proclaims a lucky lady “in the sights of [his] love gun.”  It’s nothing too puerile, mind you; the love gun is loaded with hugs and kisses.  But when he pulls the trigger, “there won’t be no misses!”    And “Laundromat Blues” manages to be both seriously menacing and seriously humorous: “I don’t want you to get so clean, baby, you just might wash your life away!”  (King revisited the song for a rather awkward sequel, “Answer to the Laundromat Blues,” on I’ll Play the Blues for You.)
The brash swagger of “The Hunter” cedes to longing, and even sweetness, for “I Almost Lost My Mind,” one of the few ballads on the album.  King caresses the Ivory Joe Hunter song, gently accompanied by tinkling piano and Joe Arnold’s swirling flute.  There’s still room for a gritty guitar solo, of course, wringing each ounce of emotion out of the 1950 R&B hit.  The sinuous Stax sound is evident on “Personal Manager,” as potent a slab of soul-blues as any, with its scorching, searing solo as later emulated by Eric Clapton with Cream.  Another blues standard is immortalized by King with the dark, atmospheric “As the Years Go Passing By,” yet the original album ends with a standard of another kind.  Ray Noble’s “The Very Thought of You,” written in 1934 and recorded over the years by Frank Sinatra, Ella Fitzgerald, Etta James and Rod Stewart, among so many others, isn't reinvented by King here.  Rather, he ramps up the husky resonance in his voice for a hip yet timeless rendition of a classic, aided by a saxophone solo from Andrew Love of the Memphis Horns.
Four of the five bonus tracks offer alternate takes of album material.  First takes of “Born Under a Bad Sign,” “Crosscut Saw” and “The Hunter” all offer peeks into King’s development process.    Each version has differences, both pronounced and subtle, from the final takes, with a loose “Crosscut Saw” clocking in at around thirty seconds longer thanks to an additional chorus.  Take 15 of “Personal Manager” is considerably shorter than the album version, thanks to a brisker groove.  King might have refined his approach to the song, but this take cooks, too.  The fifth bonus track is an “Untitled Instrumental,” and it's a real find.  The MG’s are locked into a tight, crisp groove as King deliciously riffs over steamy horns for its all-too-brief running time.
The 2013 Born Under a Bad Sign (part of the ongoing Stax Remasters series) includes two essays, a new appreciation by Bill Dahl as well as Michael Point’s fine notes from the 2002 CD reissue.  Joe Tarantino has remastered all tracks, and Paul Blakemore has mixed the five newly-discovered songs.  A true cornerstone of electric blues, this taut R&B workout remains as timeless as the heavy blues-rock music it inspired on both sides of the Atlantic.
by Joe Marchese, April 2, 2013 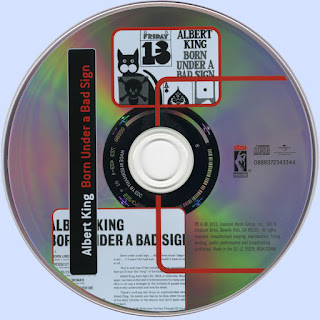