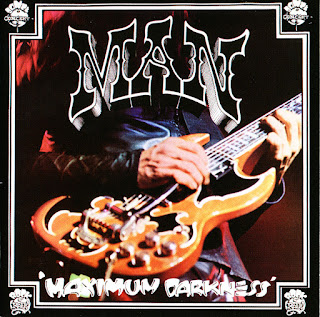 Though Budgie are probably the most well known band to come out of Wales, Man certainly have had a long and respected career as well, with many studio albums to their credit and endless touring over the years. Mostly recognized for their live shows, it's no surprise that Man has released numerous live albums, this one, Maximum Darkness, originally came out in 1975 and recently remastered by Esoteric/Cherry Red. It features the lineup of Micky Jones (guitar, vocals), Deke Leonard (guitar, piano, vocals), Martin Ace (bass, vocals), and Terry Williams (drums, vocals), with guest guitar from John Cipollina, the legendary Quicksilver Messenger Service member.

Having Cipollina on board here only adds to the bands already '60s West Coast psychedelic influenced sound. Plenty of lead guitar excursions abound on tunes such as "7171-551", and "Codeine" has a psych/acid rock/bluesy feel that wouldn't sound out of place on an old Quicksilver or Grateful Dead album. Bluesy hard rock with lots of melody and jangly guitar can be heard on "Babe I'm Gonna Leave You", while extended guitar jams once again are at the core on the near 14-minute "Many Are Called, But Few Get Up", a hard rocker with effective vocals and nasty riffs & keyboard parts to go along with the fiery solos. One of Man's more popular songs has always been the fun "Bananas", a rousing & quirky hard rocker that features guitar solo aplenty here, Jones, Leonard, and Cipollina weaving and swirling around each other for the near 12-minute duration like a cross between Yes and Crazy Horse.

Esoteric's remaster also includes two bonus tracks, the massive "C'Mon", a rambling, sprawling psychedelic jam that amazingly channels the late '60s San Francisco scene, and the heavy blues rocker "Romain". These inclusions, recorded at the Keystone in Berkeley, California in 1975, really make this a full live album (the original portion of the album was recorded that same year at the London Roundhouse), and not only does Esoteric's remaster sound great, but you also get a jam packed booklet full of information and photos. If you want to discover the jamming side of Man, this is a great place to start.
by Pete Pardo 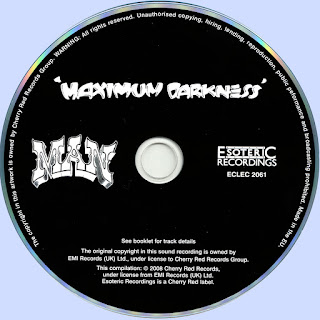 Free Text
Text Host
Posted by Marios at 8:47 AM 1 comment: