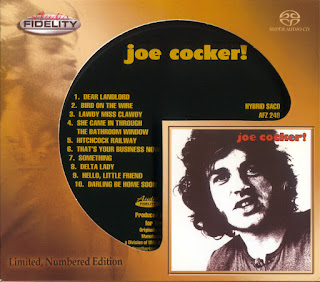 Joe Cocker’s delightful second album is ample proof that the imagination that transformed a song so fixed in our minds as “With a Little Help From My Friends” has not run out of things to do, nor fallen into the trap of “stylization.”

Joe, his Grease Band, and their friends — who together form one of the toughest rhythm and blues bands outside of the Motown studios — start from the bottom up in re-arranging material as familiar as “Dear Landlord” or “She Came In Through the Bathroom Window.” It’s not a matter of “improving” the songs, but of removing them from their original sound and conception to such a degree that they remain great music and still don’t really remind the listener of the original versions. The feeling one gets when listening to, say, Aretha’s version of “The Weight” — “Wow, they must have really been reaching on that one” — doesn’t happen when Joe and his band make music.

Not just anyone can carry off lines like those, from Leonard Cohen’s “Bird on the Wire”: “Like a bird on the wire … I will try, in my way, to be free.” When Joe sings it those words seem as timeless as the wisdom of the blues.

If Cocker himself is beginning to sound like a master, his band has surprised as well. Their introduction to “She Came in Through the Bathroom Window” sounds like a fat man splitting his pants — and then Cocker falls in like he slipped on a bar of soap. The song itself has that hilarious circus sound of Dylan’s “Can You Please Crawl Out Your Window.” And maybe that’s not a coincidence.

It would be fun to hear Cocker experiment with different sorts of back-up groups. While there are certainly limits to what he can do, they are broad enough to keep him going for a long, long time. Limits or no, what’s special about Joe Cocker is that he is so much fun to listen to, because the fun he’s having — on stage, picking his phantom guitar with mad frenzy, or on record, letting his own excesses communicate his real emotion — is completely infectious.
by Greil Marcus, February 21, 1970 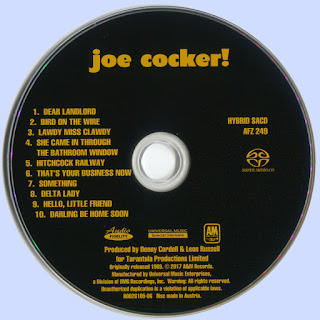 Free Text
Text Host
Posted by Marios at 7:51 AM No comments: