Nitzinger - One Foot In History (1973 us, strong blues rock with extra track) 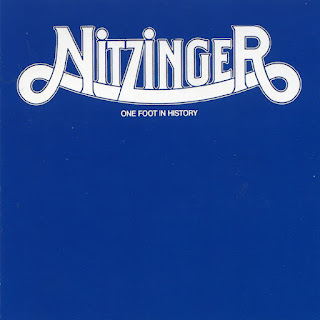 Aside from jettisoning some increasingly archaic psychedelic tendencies (and welcoming second guitarist Bugs Henderson to the fold), Nitzinger's rather arrogantly named sophomore outing, One Foot in History, pretty much picked up right where the Texan band's critically lauded first album had left off. Which is to say that it too boasted an eclectic batch of songs whose only common denominator was orbiting Planet Southern Rock in some capacity, at a time when the genre was approaching its summer solstice, thanks to the tenacity of its star-crossed founding fathers, the Allman Brothers Band, and their fast-rising heirs apparent, Lynyrd Skynyrd.
Among Nitzinger's novel stylistic diversions on One Foot in History were the mellifluous saxophone and orchestrated string backdrops added to the title track and the imperial, Cream-like "Uncle John"; the full-blown jazz breakdown anchoring the Allmans-esque "Motherload"; and, on a negative note, the misplaced, easy listening schmaltz of "Driftwood." Yet heavy Southern rockers were also available in droves, with clear standouts including the barroom brawler "The Cripple Gnat Bounce" (whatever that means!); the driving "Let the Living Grow" (clearly inspired by Humble Pie's barnburning cover of "I Don't Need No Doctor"); and the all-time classic "Earth Eater," which contrasted a pummeling main riff against an amazing melodic hook, the likes of which seems to have cropped up in many an Aerosmith song over the ensuing years.
In fact, were it not for the aforementioned "Driftwood" and a pair of rather average rockers in "Take a Picture" and "God Bless the Pervert" (hmmm...funny, but no "Louisiana Cockfight," that one), One Foot in History might have turned out as impressive and enduring as its predecessor. In the end, it was close enough to give no indication of the troubles that lay ahead, as bandleader John Nitzinger became embroiled with too many distractions and made fans wait almost four years for another Nitzinger LP. [New millennium reissues of One Foot in History were enhanced with a pair of bonus tracks: the funky album outtake "Power Glide" and a hair-raising, nine-minute live jam on "Texas Blues, Jelly Roll."]
by Eduardo Rivadavia 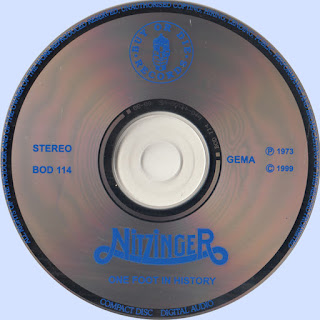