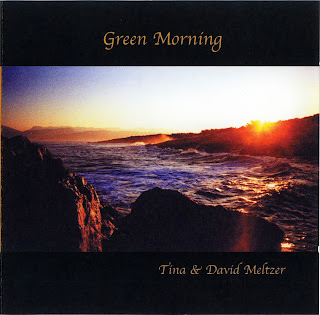 Tina and I were under contract with Vanguard Records where we recorded two albums - Serpent Power and Poet Song - both produced by noted blues scholar, novelist and poet, Sam Charters. After the release of Serpent Power -- and a gig at the Fillmore for Country Joe and the Fish and Serpent Power's debut album, Tina quit the band.  She didn't like how she sounded on the record and didn't like singing for an audience she couldn't see.

Serpent Power reassembled as a working band which included Bob Cuff (of The Mystery Trend) on rhythm guitar, Jim Moscoso (kid brother of artist/poster maker/cartoonist Victor Moscoso), and myself as lead guitarist and vocalist. In our weekend gigs at The Coffee Gallery and Dino's & Carlo's (which became Keystone Korner in the 80's), the often included additional musicians like J.P. Pickens on amplified 5-string banjo, poet Daniel Moore on shenei (Chinese oboe), conch shells, miscellaneous bells and his friend Christian (nobody ever knew his last name) who was exploring the alto saxophone.

Besides regular gigs at the two North Beach venues we also did our share of benefits and weird gigs like playing off-nights at a strip club or for prototypical yuppies in a singles bar on Union Street. It should be mentioned that Serpent Power was more influenced by modal free jazz and spontaneous bop prosody than by the coverable pop tunes of the day. Our ears were tuned to Monk not the Monkees.

Our Vanguard contract was for two albums with an option for more. Since the band had developed into a performing and improvisatory unit, we had hope the second Vanguard albumcould be a document of a live performance at one of the clubs we worked at. Sam Charters came to check us out one weekend at Dino's & Carlo's, sat through a set, and when we met afterwards told us that what we were doing wasn't commercially feasible.

Sam told us we'd have to rethink our second album. After working almost a year in this format, rejection brought the band members down. Everyone was bummed out. Soon the band dissolved: Jim went to join The Cleveland Wrecking Company, a funk band; I think Cliff stopped playing;  Clark found Susan, married and moved with her to the Berkshires to become a major voice in experimental writing; Daniel went to Europe and became deeply immersed in Sufism, changed his name, and continues working in that discipline; as for Christian, nobody knew where he went or what he's doing now. J.P. Pickens and his family became involved with various communes, he continued playing, creating junk sculptures, but was betrayed by methamphetamine and died too early.

Poet Song, our second Vanguard album, was written for Tina as a showcase for her intimate and warm voice. Sam suggested that I read some of my poems and double-track guitar behind them. We recorded it at Sierra Sound in Berkeley where Serpent Power was recorded. Some string players from the Oakland Philharmonic -- including violist Tom Heimberg, an old Fairfax High School buddy-- were assembled at the studio by arranger Ed Bogas. I wanted to write songs almost exclusively for Tina, since I'd dominated our first album. The songs and orchestration were to sound more like art song, the antithesis of what Serpent Power was doing in the clubs.

Vanguard seemed pleased and held an option for us to do a third album. A mutual friend Chris Brooks introduced us to Vic Briggs who had been the lead guitarist with The Animals. Vic was now producing records for Capitol and liked Poet Song tremendously but thought he could produce a better album. He asked us to make a demo-tape for him to pitch to his bosses at Capitol.

I wrote some more songs and Tina and I put together a tape using a clunky Sony tape recorder. (We managed to double-track vocal harmonies and guitar textures but, being technologically challenged, didn't realize they had to be mixed, which was moot since we didn't have the equipment.) Nevertheless, Capitol liked what their new British producer played and they gave the green light. We left Vanguard amicably and signed with Capitol.

The instrumental tracks were cut at the Capitol Recording Studios in Hollywood. Our studio was down corridor from a big studio where Sinatra was in the process of cutting an album. Vic selected most of the musicians for the date including John Guerin on drums, Lyle Ritz on bass,  David Lindley played violin, Michael Rubini, piano. I hired bluegrass mandolinist Scott Hambly.

The string section was added at another time. (During a session break, some of the A-List Hollywood studio musicians talked about their various investments, airplanes, real estate holdings, while Scott and I reminisced about his bluegrass band, The Ridge Runners, featuring Greg Lasser on the 5-string, who was part of my band, The Snopes County Camp Followers, with Tina, Joe Edmiston on gutbucket bass.)

Our vocal tracks were recorded in Wally Heider's San Francisco studio which, at the time, was state-of-the-art and was like entering onto a set in 2001: A Space Odyssey. Our engineer had just finished a long haul working on a Crosby, Stills, Nash & Young album. We felt like we were in the big time; super-stardom was just around the corner, glimmering like Las Vegas at night.

Cover photos were taken and liner notes were written by poet Kenneth Rexroth, a founding father of the San Francisco Renaissance and Beat movement. In a couple of weeks we received a tape of the mixed-down album and played it for anybody who stumbled into our home. Then there was an odd silence. Then there was a long-distance call from Vic who broke the news. He and four or five other producers who Capitol management had hired had been let go. Why? A corporate turn-over: a new management team was brought in and canceled all of the previous management's projects. Vic was out of a job; David and Tina would not become mega-stars but they did have a very expensive home tape. The songs you're about to listen to.
by David Meltzer 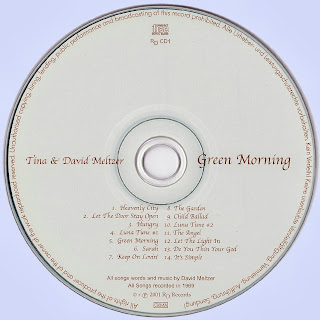