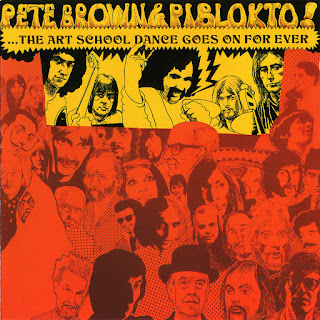 Piblokto is an Inuit word describing a “dissociative fugue state, usually occurring in Inuit women, in which the afflicted person screams, tears off her clothes, and runs out into the snow; afterward, she has no memory of the episode.” Piblokto! is also the name of a band fronted by Pete Brown between 1969 and 1971.

Pete Brown is one of those rare mavericks who really should be a household name, but for whatever reason the gods of rock, the furies, luck, life or what you may call it, didn’t always give Brown and his talents the rewards he so justly deserves.

Brown is a poet, a lyricist, a musician, a composer, a songwriter, a singer—the man Eric Clapton described as the “fourth member” of supergroup Cream. It was through Cream that Brown first came to recognition as the lyricist for Jack Bruce on such hits as “Sunshine Of Your Love,” “White Room,” “I Feel Free,” and “Politician.” Brown’s success with Cream led him to form his own band, Pete Brown and His Battered Ornaments, which included Chris Spedding among its ranks. With the Battered Ornaments, Brown released the influential album A Meal You Can Shake Hands With In The Dark.

In 1969, the Rolling Stones booked Brown and co. as support for their free Hyde Park concert. The prospect of world recognition never seemed so certain—but life is never so straightforward or so easy.

The day before appearing on stage with the Stones, Brown was ruthlessly kicked out of his own band. Even worse, his vocals were excised from the Battered Ornaments’ album Mantlepiece and replaced by Spedding’s.

Some may have given up, but not Brown, who formed a new band Pete Brown and Piblokto! releasing two albums Things May Come and Things May Go but the Art School Dance Goes on Forever and Thousands On A Raft in 1970.

Piblokto!‘s music was a pioneering fusion of poetry, folk, rock, jazz, prog, and for these two albums alone, Brown and his fellow musicians (Jim Mullen, guitar; Dave Thompson, keyboards; Steve Glover, bass; Rob Tait, drums) should have been overnight sensations—but again, it didn’t quite work out that way.

The band split and Brown went on to collaborate with Graham Bond on the album Two Heads Are Better Than One, before forming two new groups Brown and Friends then the Flying Tigers. In some respects his moment had passed, and with the arrival of punk, Brown returned to writing, this time producing television dramas and screenplays.

In the early seventies, Pete Brown and Piblokto! made two appearances on the French TV show Pop 2, where they performed rip-snorting renditions of “Aeroplane Head Woman,” “Golden Country Kingdom,” and “Got a Letter From a Computer.”
by Paul Gallagher 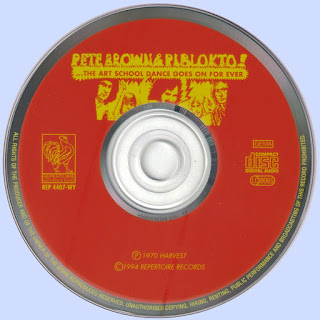