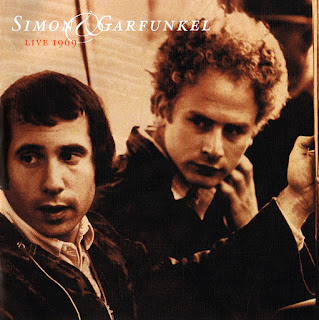 Live 1969 collects Simon & Garfunkel performances from a six-city run, which culminated in a two-night engagement on their New York home turf.
By the late 1960s, Simon & Garfunkel had become the folk establishment. The duo-- who had been together since their teenage years, when they were known as Tom and Jerry-- were unfailingly polite, earnest, and very, very serious, singing gorgeous harmonies and guided by their belief in popular music as big-statement art. Even as they drew inspiration from the Greenwich Village folk scene of the early 60s, they were never quite part of it, and never quite so stringent as some of their peers-- simultaneously too straight-laced and too ambitious. Dispensing studious allusions to Dylan Thomas, Robert McNamara, and Frank Lloyd Wright, they were and remain primarily unthreatening and accessible, which forty years later makes them an ideal gateway act to the weirder, harsher, more complex folkies of the 60s counterculture. Since the duo's infamous break-up, how many teenagers have closed themselves up in their rooms poring over the lyrics to even Simon & Garfunkel's most overwrought songs (like the high school poetry of "The Dangling Conversation") before graduating to Bob Dylan, Joni Mitchell, or Fred Neil?
Their status as a jumping-off point for further musical exploration might explain their durable legacy even four decades later, but Simon & Garfunkel have a deeper, more consistent catalog than most of their peers. For all their politeness, they still took risks, still tried to innovate, as this document of their short 1969 tour proves. Released exclusively to Starbucks with a wider release planned tentatively for this fall, Live 1969 collects performances from their six-city run, which culminated in a two-night engagement on their New York home turf. Along the way, they premiered new songs from their forthcoming album, which would be titled Bridge Over Troubled Water and would prove to be their swan song. Part of the pleasure of listening to Live 1969 is hearing early versions of "Why Don't You Write Me" and "Song for the Asking" and imagining what it would have been like to hear them with fresh ears, well before they became lodged in the American music culture. As Art Garfunkel remarks, "This is also one of our new songs. It's called 'Bridge Over Troubled Water'." Five and a half minutes later, the hall erupts in rapturous applause.
Another part of this album's appeal is hearing Simon & Garfunkel's backing band rip through numbers like "Mrs. Robinson" and even "The Boxer". Having already played on their two previous albums, the ensemble-- Joe Osborn on bass, drummer Hal Blaine, pianist Larry Knechtel, and Nashville picker Fred Carter Jr.-- give these songs a spark of energy, loosening them up where the studio versions were tight and tasteful. When someone in the audience yells for more piano, Garfunkel replies, "The keyboard should be louder, huh? What label do you produce for?" That's pretty dickish stage banter, but sure enough, a few songs later Knechtel's more prominent piano puts extra bounce in "Why Don't You Write Me?", which here sounds like it should be a break-out hit.
In addition to offering proof that someone once yelled for "Richard Cory", Live 1969 represents a turning point for Simon & Garfunkel. By this point they were all but broken up, with Garfunkel ready to try an acting career and Paul Simon destined for a more productive solo venture. They played some of their last live dates together on this tour, and wouldn't play together again until their official reunion thirteen years later (unless you count their brief reunions on "Saturday Night Live" in the 1970s). The tension with which their partnership famously ended is nowhere apparent on Live 1969, although Simon seems to hang back while Garfunkel dominates, introducing the songs and running through Simon's composition "Bridge Over Troubled Water" solo.
Ultimately, Live 1969 succeeds on the merits of its tracklist, which mixes hits like "Homeward Bound" and "The Sound of Silence" with lesser-known tracks like "For Emily, Wherever I May Find Her", "Leaves That Are Green", and the lone unreleased cover, "That Silver-Haired Daddy of Mine", which had previously been covered by their heroes the Everly Brothers. Late on the album, the back-to-back sequencing of the quiet, self-consciously poetical "Sound of Silence" with the defiantly self-delusional "I Am a Rock" feels particularly inspired-- two takes on loneliness whose contrast makes it possible to hear both songs somewhat afresh. In fact, that seems to be the primary and most compelling goal of this belated release: to let us hear these songs as if for the first time, as a means to reconsider the two men behind them.
by Stephen M. Deusner 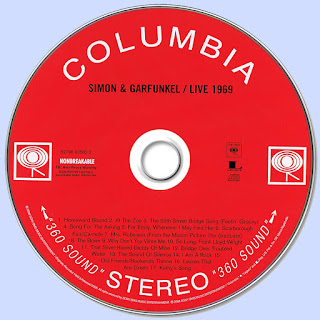