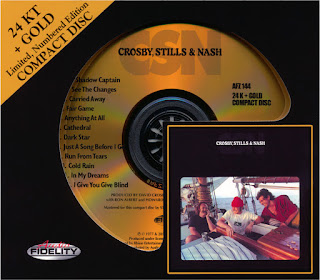 The times had certainly changed since Déjà Vu's release in 1970. Nevertheless, there was a hunger in audiences for a return to the harmony-soaked idealism with which the trio had been catapulted to popularity, and CSN consequently reached number two on the charts, behind Fleetwood Mac's megasuccessful Rumours. The music here is very good, though probably not up to the hard-to-match level of Crosby, Stills & Nash or Déjà Vu.

Still, the songs showed a great deal of lyrical maturity and compositional complexity compared to those earlier albums (from a far more innocent time). "Just a Song Before I Go" was the latest of Graham Nash's radio-friendly acoustic numbers, and a Top Ten single. "See the Changes" and "Dark Star" ranked with the best of Stephen Stills' work, while David Crosby contributed three classics from his distinctive oeuvre: "Shadow Captain," "Anything at All," and the beautiful "In My Dreams."

Nash's multi-part "Cathedral," a recollection of an acid trip taken in Winchester Cathedral on his 32nd birthday, became a staple of the group's live repertoire. CSN was the trio's last fully realized album, and also the last recording on which the three principals handled all the vocal parts without the sweetening of additional voices. It has held up remarkably well, both as a memento of its time and as a thoroughly enjoyable musical work.
by Jim Newsom 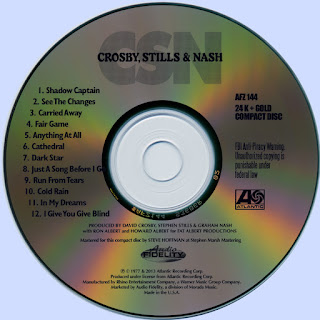 Free Text
Just Paste
Posted by Marios at 9:40 AM No comments: