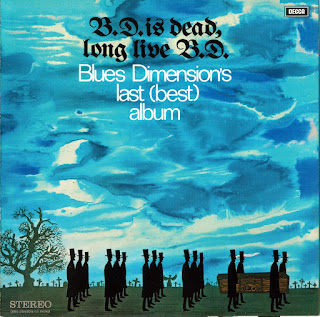 One of the most underrated Nederpop bands from the 60s was the Zwolle band Blues Dimension . A unique band because they were one of the first to join a brass section. Originally the band played rhythm ‘n’ blues but their influence widened from psych and jazzy tunes.

The album opens with the beat ballad Stay with flowing organ and piano playing by van der Vegt. What is particularly striking in this song is how underrated guitarist Cees de Best is. His beautiful game is very reminiscent of Eelco Gelling's. Singer Leen Ripke also appears to be an excellent bluesy singer. The role of the blazers is meager because they are added at the end of the song. The wind instruments can hardly be heard on this album.

Battlefield Of Love was the last single from the band and did not get much of sales, even so this ballad can still be counted as one of the pearls of the Nederpop,. vory Tower Of Utopia is also a psychedelic ballad with a bluesy touch by the vocals of Ripke.

Supernatural Powers is an up-tempo funky blues rocker with excellent bass from Deinum and bluesy piano. In the cover of Willie Dixon's I Ain't Superstitious  you can hear the pure blues side of Blues Dimension. Here again the Muskee-like vocals of Ripke stand out. Society's Child is also a cover by Janis Ian, a psychedelic funky song.

The title track “BD Is Dead, Long Live BD” is  an instrumental song. This jazzy song focuses on saxophonist Rudy van Dijk. The cover of the Yardbirds song Shapes Of Things sounds like it is being sung by Rod Stewart. In the blues rocker Cornflakes, the driving bass from Vaninum and guitarist Cees de Best steal the lead roles. Final song of the album, is the up-tempo psych pop “Drift Into Space”.
by Peter Marinus 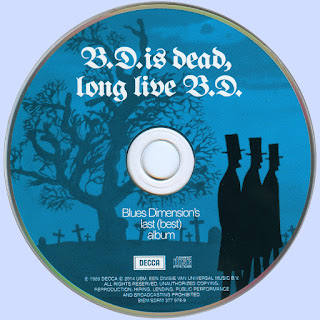